How is Israel confronting the Omicron wave?

By Ben Simon and Yasmin Zaher 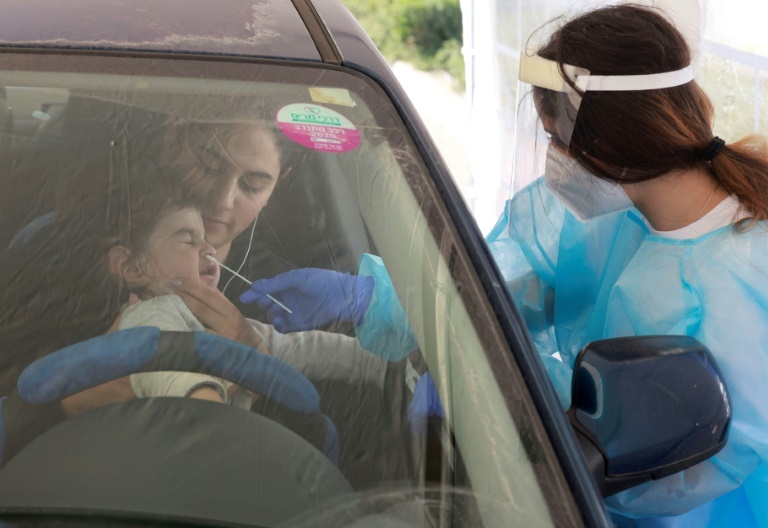 Jerusalem (AFP) - Israel's response to the Covid pandemic has been closely watched worldwide, notably for its rapid vaccine rollout and early decision to offer booster shots before there was broad scientific support for a third dose.

The country is now confronting an unprecedented caseload fuelled by the Omicron variant, with more than 37,000 new cases reported Tuesday, shattering previous records.

Among those infected was Foreign Minister Yair Lapid, who told public radio on Tuesday that he was in good health and isolating at home.

Despite the surge in cases, the Israeli government has so far avoided reimposing lockdowns and most other restrictions, insisting it can manage an infection wave with a peak that may still be weeks away.

What is the strategy?

Cyrille Cohen, a life sciences professor at Bar Ilan University near Tel Aviv, described this as "a good move", which delayed large-scale local transmission and bought time to prepare for the coming wave, including by securing Covid treatment supplies.

But he said Israel did not use this time to adequately boost testing capacity, a fact now driving public frustration.

With domestic transmission surging and Prime Minister Naftali Bennett forecasting between two million and four million infections in the weeks ahead, Israel concluded that travel restrictions would do little other than harm the economy.

It has both reopened its skies and allowed bars, restaurants, gyms, houses of worship and other facilities to stay open.

Cohen told AFP that Israel has effectively "transferred some of the management of this crisis from the authorities to the people", giving primary responsibility to residents to self-test and quarantine.

Bennett said Tuesday that "Israel is following three guiding principles: keep our economy open, protect the most vulnerable folks in society -- elders -- and to take care of our children."

"We have difficult weeks ahead, but there is no need to panic," he told reporters.

What are the risks?

Hagai Levine, chairman of the Israeli Association of Public Health Physicians, told AFP that Israel's decision to "continue with normal life" will inevitably result in "many contaminations".

Levine backed the decision to avoid a fresh lockdown but said the government would face problems if it continues to announce policy adjustments on a near daily basis.

Levine said about the current strategy that "the main risk is political".

"Changing the policy continuously causes confusion and a feeling that the government is not in control, which is true, because it's not possible to be in control" of the Omicron wave, he said.

Amid concern that spreading cases and mandatory isolation would stress the labour force, especially in the healthcare system, the health ministry announced Tuesday that people who test positive will be allowed to leave quarantine after seven days, instead of 10, if they are asymptomatic.

Fourth shot for all?

More than 80 percent of Israel's adult residents have received two coronavirus vaccine shots and more than half have also been given a booster.

Bennett said last month that Israel also intended to be a trailblazer in administering a fourth shot to combat Omicron.

Certain at-risk groups now have access to a fourth shot, even if scientific evidence on its impact remains scant.

"Israel is open to doing things based on rationale without scientific proof," Levine said.

"This is sometimes worth it –- as was the case with the first and third jab, which were administered quickly and, looking back, this paid off."

Preliminary data from Israel's Sheba Medical Center indicate a significant antibody boost in those given a fourth shot.

But Cohen stressed it was too early to reach any conclusions about the import of another booster.

"I can understand the decision to allow it for people that are at risk," he said, but he added: "We don't know if it will make a difference compared to three shots."