How Hyderabad-based Chitrika is reimagining handlooms for the young

The Hyderabad office of Chitrika, an artisan producer company that works with 300 handloom weaver families across Ponduru in Srikakulam district and Mandapeta in East Godavari districts, Andhra Pradesh, and Narayanpet district in Telangana, is adorned with racks stocking saris and fabrics. On a few clothing stands are samples of Chitrika’s recent experiments — garments in contemporary silhouettes targeting younger buyers.

Vijaya Switha Grandhi, who founded Chitrika in 2005, says experimentation has been an ongoing process, alongside traditional weaves. The design vocabulary evolved gradually: “We nudged weavers to develop at least three new designs a year and offered incentives. We do not tamper with traditional techniques (jamdani, kuppadam and ballakammi) but look for new designs.

Chitrika courted online buyers during the pandemic through chitrika.in. The label rolled out its ready-to-wear collection for its online clients after tasting success in exhibitions organised by the Crafts Council of Telangana, among others.

The garment line is more than merely stitching existing handloom fabric in new silhouettes, but rethinking the design at the loom level. If a trouser is to have a design panel running along its outer edge, the pattern emerges from the weave itself rather than a patch stitched on the trouser fabric. Similarly, chequered patterns on the blouses are conceptualised at the weaving stage. The design intervention received a fillip when fashion graduates Mahima Khare and Amogha G S joined the label in 2020.

Switha learnt the essentials of working with the rural sector during her Post Graduate Diploma in Risk Management course at the Institute of Rural Management, Anand (IRMA), Gujarat: “We were taught to work with the rural community and help businesses grow. Thanks to my roots in Kanchipuram and interest in weaves and crafts, I decided to work in the handloom sector.”

The learning curve was fraught with highs and lows till 2011. It wasn’t easy to break into the craft network where established players, both government-aided units and private operators, had already liaised with spinners and weavers. Chitrika began working with 10 weavers near Ponduru in 2006 and scaled up to 300 families as it expanded its footprint to East Godavari in 2013 and Narayanpet in 2017. “We also have a network of pre-loom workers; and dyeing is outsourced.”

The label claims to offer zero-bleed handlooms. Switha attributes that to the quality of dyes as well as the mechanised process: “People think it is blasphemous to mechanise anything in handlooms. Certain repetitive and non-creative processes can be mechanised.” The ‘asu’ machine used for yarn winding by Pochampally weavers is an example.

Elaborating on the bleed of dyes in handlooms, Switha says: “Dyeing is a labour-intensive process and there are chances that the overworked or insufficiently trained staff might wash a dyed fabric fewer number of times than required; hence the excess colour bleeds.”

Looking back, she is glad that Chitrika has done a cumulative business of ₹18 crore since inception, and scraped through the pandemic. “We want to start a dyeing unit and that requires an investment of ₹3 crore; mobilising funds remains a challenge.”

Chitrika sells directly to customers and supplies fabrics and finished products to established handloom retail labels. Switha takes the discourse surrounding handloom revival with a pinch of salt: “There are fewer weavers today than a decade ago, while the demand has remained the same.”

By 2030, the organisation hopes to enable an ecosystem that will benefit 10,000 artisan households. Design experimentations will continue. Showing off a design panel where the traditional ballakammi has been tweaked to result in new patterns, she explains how minimalistic designs on saris without elaborate borders can make an ideal workwear.

For garments, the team is also gauging the fall of the fabric and tensile strength, apart from washing and shrinking experiments: “Our goal is to offer garments in three ranges — below ₹1000, ₹2000 and ₹3000.”

Chitrika will have its own store at the Crafts Council of Telangana building CCT Spaces in Banjara Hills, later this year. 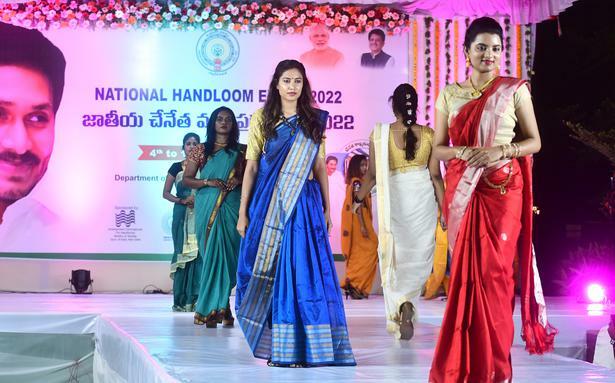 The Hindu
One subscription that gives you access to news from hundreds of sites
Folk Art, Fine Art And Fabric Come Together In Louisville

Two women on an epic road trip in the 1950s. A Scottish midwife entering her 80s. One of contemporary art’s…

Put the soft in soft play

Evening Standard
These Madurai dots are all set to go places

Inspired by a Bhuj NGO, a city collective infuses life into the dying art of Sungudi

Tarabo (Bangladesh) (AFP) - With wooden spinning wheels and hand-drawn looms, Bangladesh is painstakingly resurrecting a fabric once worn by…