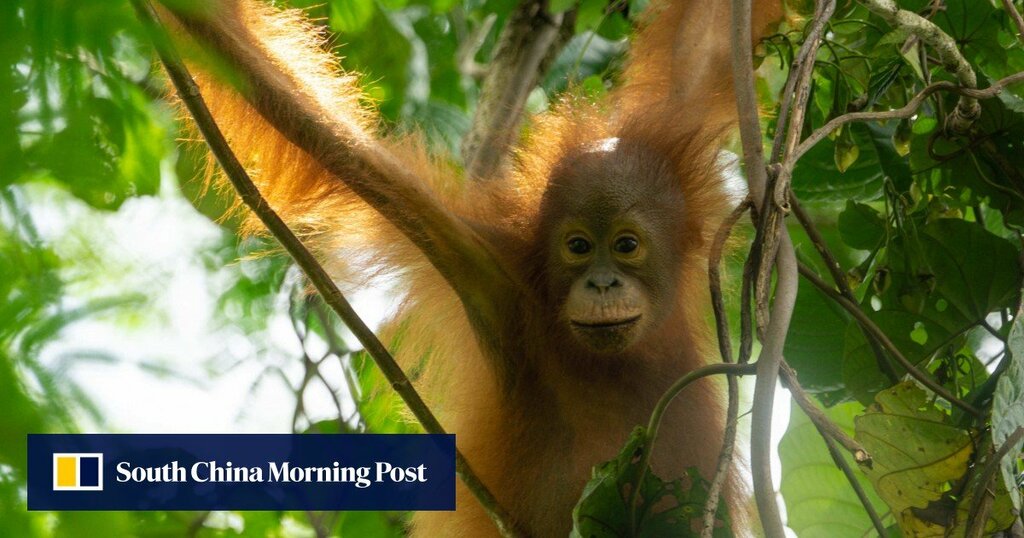 The first time I saw a wild orangutan in Sabah, Malaysian Borneo, I was cruising on the crocodile-filled Kinabatangan river looking for proboscis monkeys. I was lucky, even though the ape was high up in the forest canopy and all that could be discerned was a maroon spot hovering against a wall of foliage.

I had a closer encounter with Borneo’s endemic primate in the highly protected Danum Valley Conservation Area, but for that I had to hire a local guide with an eagle eye and deep knowledge, wake up at the crack of dawn and sweat along dark jungle paths for a couple of hours.

“Wildlife viewing in Africa, India and South America normally involve drives across grassy plains where large groups of animals congregate to graze,” says naturalist Quentin Phillipps. “Many lodges have waterholes and salt licks in front of their verandas so that at night, all the animals come to drink in front of the lodge. But until now, wildlife tourism in Borneo has been completely different.”

Phillipps, author of the seminal Field Guide to the Birds of Borneo (2012) and Field Guide to the Mammals of Borneo and Their Ecology (2016), says that the nature of the dense forests on Asia’s largest island, which is shared by Malaysia, Indonesia and Brunei, means wildlife such as orangutans, gibbons and hornbills stay hidden in the canopy.

Jungle spotting is very hard work for local guides and uncomfortable for most tourists, who have to get hot and dehydrated, and be bitten by mosquitoes and leeches before seeing the few creatures that do expose themselves.

The only exception, says Phillipps, is when a big fig tree is fruiting. “You just wait by the fig tree and all the hornbills, primates, civets and squirrels come to you,” he says. All of Borneo’s wildlife, from orangutans to proboscis monkeys, bats, herons, fish eagles, macaques and elephants feast on the fruit of the ficus tree.

Phillipps believes that planting fig trees could be the long-term solution that Sabah, and Borneo, need to fight deforestation and create wildlife corridors to reduce animal-human conflict. What’s more, Phillipps says, such plantings could change local wildlife tourism by attracting animals to the doorstep of any resort throughout the year.

“Contrary to other trees [whose fruits are] eaten by primates, like durians or rambutans, which only fruit once a year in a big bang and are then barren for the rest of the time, [most species of] fig trees fruit asynchronously for two weeks once a year, but at random intervals,” Phillipps explains. “So if you plant say a hundred figs, on average there will usually always be four figs fruiting at any one time.”

However, fig reforestation is no easy task. Phillipps says that the main issue in Sabah has been the limited number of big fig trees, which are randomly scattered in dense forest. Guides cannot predict the times when they’ll fruit because they are hard to find and monitor.

Furthermore, few of the many NGOs already working on reforestation projects across the state understand the rhythms of fig ecology or have the patience to work with the trees. Fig saplings can be planted after just four months but only start fruiting when they are about 10 years old.

Developments are starting to be seen, however: pioneer fig-planting efforts started a decade ago at the Borneo Rhino Alliance, or Bora (also known as the Sabah Ficus Germplasm Centre), inside the Tabin Wildlife Reserve in southwest Sabah.

Payne is referring to a former WWF-backed reforestation project in a degraded forest near the coastal town of Lahad Datu that was focused on saving the 40-or-so orangutans that lived in an area enclosed by the Segama river, road developments and palm oil plantations.

“The emphasis was on dipterocarps and pioneer tree species,” says Payne. “I did not see much point in planting either, for dipterocarps fruit very rarely and are part of the old-growth forest ecosystem, and do not provide food for orangutans. In fact, most dipterocarp trees in Sabah grow slowly and fruit on average every 12 years.”

Back then, the idea of planting wild figs – which grow easily from cuttings at any time without having to wait for a major forest fruiting year – did not gain much traction, although Bora’s veterinary surgeon and field manager, Dr Zainal Zainuddin, had started growing up to 90 species of figs in the Tabin Wildlife Reserve to feed the Malaysian rhinos he was nursing.

“When Iman, the last Sumatran rhino in Malaysia, died in 2019, the figs from the rhino food garden became a ready-made basis for the Sabah Ficus Germplasm Centre,” says Payne.

The centre has been creating an orchard with a target of producing 1,000 saplings a month of Ficus racemosa (cluster fig), one of the most prolific fruit trees in the world. Commonly found on riverbanks throughout lowland Borneo, the local names for this tree are tangkol (Sabah Malay), nunuk ragang (Kadazan Dusun) or pohon loa (Indonesian). Unlike other fig species, it can provide between six to eight crops each year.

When these plants are mature, their branches can be marcotted (the process of rooting branches or stems that are still attached to the parent plant) or grafted onto younger plants, producing a new generation of figs that can fruit much earlier.

Bora’s goal is to plant these along riverbanks and next to palm oil estates where the vegetation has been damaged.

Today, even Bukit Piton is being replanted with figs, by the Bukit Piton Orangutan Project initiated by Swiss tour operator Simon Werren and his Malaysian wife, Itisha Ismail, who started the project in 2017.

“Not all of our trees are figs, because our main aim is to recover and connect the canopy,” says Itisha. “The first step is to focus on all pioneer trees such as talisay (Indian almond tree), laran (Leichhardt pine) and binuang (ilimo), which provide a food source and shelter for the orangutan and endemic birds species.”

Werren says that they intend to have expanded the area under plantation from 6.5 hectares to 13 hectares by the end of 2021. “The lockdown has given us more time to focus on looking for donors and better manage the tree planting projects.”

Brunei-born Shavez Cheema, of NGO 1StopBorneo Wildlife, is another young researcher who has embraced the promise of fig tree planting after meeting Phillipps and Zainal.

“I have been to every single corner of Sabah, from Long Pasia to Sipadan, and whenever there is a fruiting tree, there is wildlife,” says Cheema, who operates out of Sabah’s southeasternmost town of Tawau, near the border with Indonesia’s Kalimanatan.

Cheema started fig-tree nursing and conservation tourism in the Sabah Softwood plantation, near Tawau, after a herd of wild pygmy elephants occupied parts of the estate.

Before the pandemic, the Plant4Elephants project relied on tourism to pay for the maintenance of the fig-tree nursery, the saplings of which supported a long-term project to establish a wildlife corridor to give the elephants safe passage into the southern side of the Danum Valley Conservation Area.

But with no tourists to join elephant safaris, Cheema has turned his attention to another of his projects, Plant4Tawau/Plant4Hornbills, the goal of which is to connect the Tawau Hills Park reserve to the lesser-known Gemok Hill, about 10km to the south. The future fig tree corridor will help protect and feed wildlife such as gibbons, the civet-like binturong and Sabah’s eight hornbill species – including the helmeted hornbill, which is among the most endangered birds in Southeast Asia.

“The hundreds of fig trees we have planted [during lockdown] will soon become thousands, and whenever they will fruit, everyone will reap the benefits and wildlife conservation tourism will thrive,” predicts Cheema.

The state’s fig-planting activities are “supported by Sabah Forestry Department, which is also actively involved in similar projects in the Ulu Segama Malua and Sungai Pin forest reserves”, says research officer Suzana Sabran, of the Forest Research Centre in Sepilok, near Sandakan.

Their example should encourage authorities in other parts of Borneo, tropical Asia and the wider world to rethink their reforestation strategies, for it only takes the right type of tree to both ensure the satisfaction of future visitors and reap ecological and economic benefits.

“As long as there is no poaching, [with fig-tree planting] Sabah can become the top wildlife destination in Asia,” says Phillipps. “The government should mandate that, to obtain a licence to open a tourist lodge, one needs to plant at least 300 fig trees next to it.”