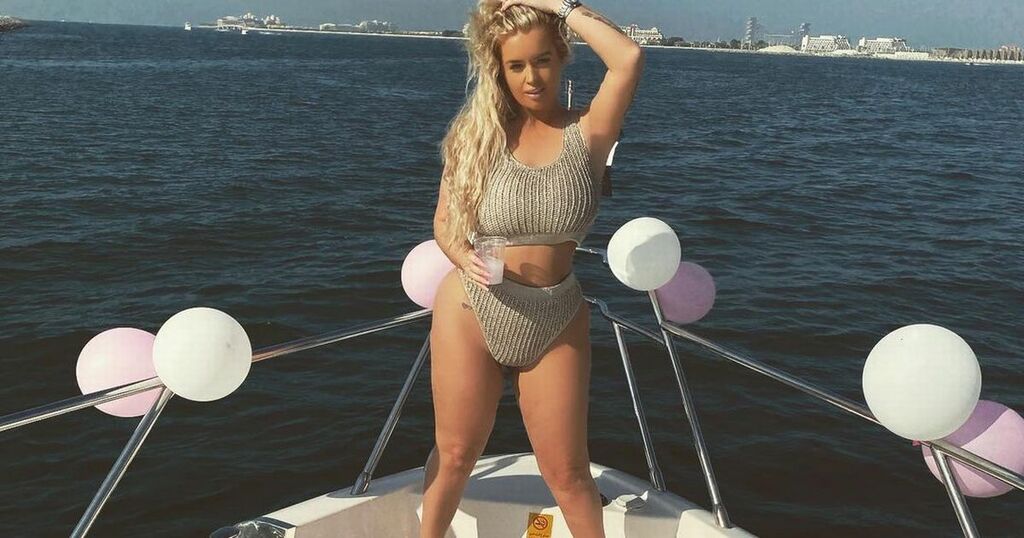 There's no question that if any of us won the lottery as a teenager, we'd probably splash the cash in some outrageous ways.

And with tonight's Lotto jackpot hitting a record £184million, the lucky winner might want to turn to Jane Park for some advice.

Since becoming the youngest ever EuroMillions winner in 2013, the Scottish lass, 25, has burned through thousands of pounds - splurging on a new home, cars, holidays and plastic surgery.

Before scooping the £1million jackpot, the then-17-year-old was working as an admin temp for £8 an hour and living with her mum Linda in a two-bedroom flat on an Edinburgh council estate.

Since then, her life has been a rollercoaster of highs and lows - fighting suspected sepsis after a botched op, hauled to court over a drink-driving charge and offering potential boyfriends a £60,000-a-year 'allowance' to date her.

Here, we look at what she's done with her incredible fortune - and why she still felt like winning the lottery left her with more "stress".

Understandably, with £1million to burn, Jane fancied a space of her own.

She's moved out of her council flat with her mum and into a three-bedroom property kitted out with some dazzling decor.

Giving fans a peek into the home, where she lives alone, on Instagram, Jane's showed off a swanky open-plan kitchen, which boasts a marble island that leads out on to a patio.

The lovely house is decorated (in true influencer fashion) with cool greys and monochrome tones - but she's also added warmer touches like flowers in multiple rooms.

Jane's taste in decor proves she likes sparkle and glamour as she has a grey crushed velvet couch and mirrored TV unit.

The outside area also appears to have an enviable swimming pool and patio area decked out with chairs for when she likes to entertain.

Gets 'absolutely hammered' on lavish trips

These days, however, it appears Jane isn't spending much time at home - having just returned from a controversial jaunt to Dubai.

The Scot ditched the UK at the end of December to soak up some winter sun in the UAE, but was forced to defend herself after being accused of flouting lockdown rules.

After being called “unthoughtful” and “part the problem” by one social media follower, she insisted she wasn't breaking any rules as she had flown out when travel rules were relaxed.

“There wasn’t any essential travel you were freely allowed," she said. "Where as now it’s essential travelling so I won’t need to come back. As the UK nor yourself are essential to me. So off you pop big man.”

This week, the socialite revealed she is now spending most of her time in Liverpool after three months in Dubai.

During her trip, she teased followers with incredible pictures of her stay at the glitzy Versace hotel.

And while Jane has travelled to the US and the Maldives, she prefers Benidorm and Magaluf.

“I don’t go on holiday that much, about four times a year,” she told the Sunday People. “I wait until my friends can go.

“And although I’ve been to the Maldives I much prefer Benidorm because nobody is looking down at you. You can get as drunk as you want. In the Maldives, you can’t go and get absolutely hammered."

She was clearly thrilled with the results, saying: "They're up there with the best things I've bought."

In 2017 she flew to Turkey to have a Brazilian bum lift to make her bottom bigger.

However, she suffered an extreme reaction to anaesthetic in the surgery that left her face and lips swollen and inflamed.

Jane feared she was fighting for her life with suspected sepsis after the botched op.

She said on This Morning at the time: "I literally thought that I was going to die. I don't know what was wrong with me and they said to me I'd had a reaction to the anaesthetic."

Earlier this year Jane went back to Turkey to have another bum lift op.

She told her Instagram followers: "Surgery isn't always an easy decision, I have had liposuction and BBL (Brazilian Bum Lift) redone (feel like it should come from me).

"Can't wait until the swelling goes down and I can see my full results."

Jane's body transformation has earned her a legion of admirers and she's cashed in by launching an OnlyFans site.

The Scot reportedly makes up to £45,000 a month posting topless pictures online, according to The Sun.

“It’s completely unexpected," said a source. "It’s crazy. The £30 a month is for being on her OnlyFans profile.

"People can pay an extra £50 for topless images and she donates the cash to charity. The profile gives her £45,000 a month for holidays, nights out and clothes."

Hitting back at criticism over her page, Jane said: “I seem to get whinged at regardless of what I do. When I didn’t work I would have people thinking I didn’t deserve my money.

"Now I do something online and earn money I still get whinged at. I can’t win.”

Romance hasn't always been easy going for Jane, who has had a string of boyfriends since winning the lottery.

Following the breakdown of an 18-month relationship in 2017, she told the Sunday People: “I’ve had s**t relationships and it’s left me with a massive guard up.

"With the last one, I ­showered him with gifts. I thought it would make him happy.

“I bought him a Rolex, a car, clothes every week. I regret it all.”

In March that year, she briefly dated X Factor's Sam Callahan after sparking up a relationship over social media.

But reports of Sam kissing fellow contestant Soheila Clifford in front of Jane while they were at a house party left her in tears, and it all came to an abrupt end.

The following month, the singer begged Jane to leave him alone, branding her as "obsessive" and wanting to follow him into the Big Brother house.

Sam brutally told The Sun: "If I'm really honest, I wish she would just go away. She needs to pipe down.

"If she actually thought there was something really serious she was wrong.

"We were friends when we met at these events in London and we had a good time but she was wrong if she thought anything was going to happen. We live millions of miles apart, it wasn't going to happen."

However, Jane quickly moved on from the heartbreak and started dating Dundee FC's Jordan Piggott in September of the same year.

They were pictured enjoying a date night at a Toby Carvery and sharing a steamy kiss in the street after she met his parents for the first time.

When they sadly split, Jane eventually checked herself in for counselling following their relationship and her "obsessive" behaviour.

She admitted she even considered hiring a private detective to spy on Jordan, explaining: “Winning the lottery made me a ‘psycho girlfriend’, the money made it too easy to keep an eye on what boyfriends were doing.”

Having failed at finding the perfect relationship, Jane then decided to try something different - launching a website where lads could apply to be her boyfriend.

She was offering one lucky man an eye-watering £60,000 a year "allowance" to wine and dine her.

However, she later told Heart Breakfast that she had, perhaps predictably, found many lads were chasing her money.

She said: "It’s so hard when you’re in this position. I’m only 23 now and I still don’t know whether guys are only with me for love or money.

"I’m always questioning people, and I just feel like it would be better like if I feel like they have money, that they wouldn’t be wanting mine."

Alongside the holidays, bum lifts and boyfriends, Jane loves a good shopping trip - and showing off her designer garb on Instagram.

Following her win, she splashed out on treats including a Louis Vuitton handbag and chihuahua called Princess.

Unfortunately, the pup didn't last so long in her care, with Jane telling the Sunday People: “My dog stays with my auntie but I still go and see her.

“At the time there was too much going on. She didn’t like my car and I didn’t have time for her.”

“It was flashy and people were always looking at me. But it was far too big," she said.

In 2017, she was banned from driving for 18 months after pleading guilty to being three times over the drink-drive limit.

The judge also fined her £900 for driving her BMW 1 Series through a McDonald’s drive-thru in Edinburgh in October 2016.

Reflecting on her win ahead of the verdict, Jane called for the minimum Lotto age to be raised from 16 to 18, evening threatening to sue bosses.

She said: “At times it feels like winning the lottery has ruined my life.

"I wish I had no money most days. I say to myself, ‘My life would be so much easier if I hadn’t won.’

“I have material things but apart from that my life is empty. What is my purpose in life?”