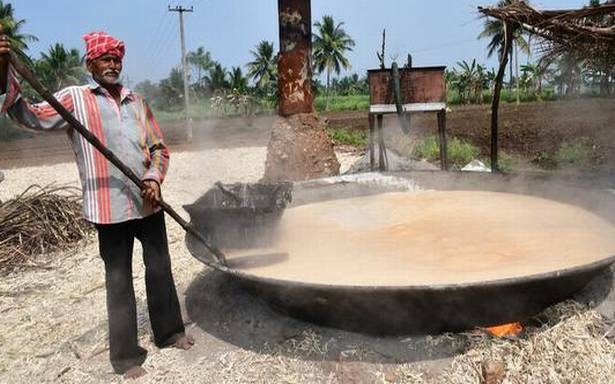 KKN Nallasamy has had white sugar with his tea for only three months in his lifetime.

The 72-year-old farmer prefers using country sugar, made right beside his sugarcane fields at Kavindapadi village in Erode district, 98 kilometres from Coimbatore. “A terrible drought struck us some 20 years ago and our crops failed,” he recalls. “I could not make naatu sakkarai (country sugar) and hence had to buy white sugar. But after three months I stopped using it,” he pauses, chuckling about how it did not feel or taste quite right.

Kavindapadi is a major supplier of country sugar in the State. Sugarcane fields are spread out across the village — the strapping purple stalks are fed well by the Lower Bhavani Canal. “Our country sugar is used to sweeten panchamirtham at the Palani Murugan temple,” says KKN Eswaramoorthy, Nallasamy’s son. The 45-year-old manages 12 acres of the crop, and also makes and sells country sugar.

“Kavindapadi’s population is around 10,000, of which around 2,000 of us are involved in farming,” he says. The village has two major white sugar mills in the vicinity; ironic in a place known for country sugar.

“Several farmers sell their sugarcane to the mills, while some sell their crop to commercial jaggery units in the region,” explains Eswaramoorthy, just as his mother walks by to offer us tea — with country sugar.

The sugar adds a mellow nutty flavour to the tea, something that Eswaramoorthy swears by. “It has grown in popularity over the last decade or so, which is why I decided to market it on Facebook,” he explains. The page Sugarcane Jaggery Powder, that he started in 2015, is a direct link between the farmer and consumer. “If I sell through the agent in my village, the product will change three hands before reaching the consumer, and I end up making very less,” he says.

And so he started his own brand, the first in his village to do so. “Traditionally, pongal was made with naatu sakkarai,” says Eswaramoorthy. “Jaggery is the same, made into balls,” he adds. Somewhere along the way, jaggery, probably owing to its shape — there is also ‘achchu vellam’, shaped into small rectangles — gained in popularity.

“Over the years, commercial units started adding white sugar while making jaggery, and people ended up getting used to what is an unnatural sweeter version,” he explains.

Around a kilometre from his farm, M Maranayakkar is overseeing work on his field. It is a cloudless day, and the sun beats down on us. S Sengottayan and his team of eight are churning out a batch of 90 kilograms of country sugar. The 67-year-old owns a wooden cane crusher, and works for farmers in the region. Once hired, he, along with his team, sets up a clay stove by the land-owner’s field, harvests sugarcane and churns it into sandy brown country sugar.

“Five hundred litres of juice will yield around 100 kilograms of sugar,” explains Sengottayan, walking over to a gigantic skillet made of mild steel — it can hold 1,000 litres — where sugarcane juice simmers, giving off sweet-smelling fumes.

The juice simmers for two hours; 500 grams of baking soda and 100 grams of calcium carbonate are added at various intervals; 50ml of coconut oil is drizzled in just before it is taken off the fire. Sengottayan gives the shimmery concoction a mix with a mammoth ladle.

“Careful now,” his wife Sellammal signals us a warning. “A drop of that can drive a hole into the skin.” But she casually walks around it, sending several ripples glide through the liquid — that has now reached the consistency of honey — with another ladle.

The juice has reduced to half its volume. Suddenly, there is a commotion among them — it is time. They gather by the vessel: four of them tip it into a similar skillet. In one quick move, the semi-solid beauty slides into the waiting container. Sengottayan quickly mixes it with a wooden implement. The golden, gooey substance changes colour right before our eyes. “This will turn powdery in 30 minutes,” Sellammal tells us.

Sengottayan scrapes a tiny bit off the ladle and offers it for us to taste: he calls it javvu mittai (sticky candy). It sticks to our fingers as we pull it apart to eat it. The mittai is intoxicating — imagine the sweetness of a hundred sugarcanes condensed into a sticky concentrate that melts in the mouth. “Nice, isn’t it?” chuckles Sengottayan. “I get to eat this every day.”