How can we reverse the vaping crisis among young Australians? Enforce the rules

ABC TV’s Four Corners this week reported how unlawful sale of e-cigarettes in Australia is out of control.

The program highlighted the effects on young people, in particular, including how easy it is for them to buy the products.

How did this slow-moving public health train wreck unfold in broad daylight, almost a decade after the Cancer Council warned it was coming?

The answer is poor or non-existent enforcement of good laws.

The use of all harmful substances in young Australians is declining – except for e-cigarettes and smoking in men aged 18-24.

Last week, an updated statement from the National Health and Medical Research Council reflected increasing concerns from public health officials about the growing uptake of e-cigarettes, particularly by young people.

Read more: A damning review of e-cigarettes shows vaping leads to smoking, the opposite of what supporters claim

But aren’t these illegal?

Anyone using a nicotine e-cigarette without a valid doctor’s prescription has obtained the product unlawfully. Its importation was unlawful, as was its storage, sale and promotion.

Yet, as the Four Corners program showed, this is happening on an industrial scale. Merchants with a profit motive are promoting addictive products, with no regard for the health of young people.

Retailers and online entrepreneurs are clearly not complying with current laws. And these laws are not being enforced.

We need to target importation

E-cigarettes are not manufactured in Australia. If their destination is not a pharmacy or someone with a valid prescription, their importation is unlawful.

But it is clear, from the number of illegal e-cigarettes available in Australia, the federal government is not enforcing its own importation rules.

Attempts to amend regulations to further restrict imports were proposed in 2020. This would have enabled the Australian Border Force to intercept illegal e-cigarette imports.

However, the government assured the community that requiring all non-tobacco nicotine products to only be available on prescription (schedule 4 of the Poisons Standard) would achieve the same result. It said this would protect young people from e-cigarettes.

It’s almost nine months since this came into effect in October 2021. Yet young people, in increasing numbers, are accessing e-cigarettes.

The scheduling standard and the rules underpinning it are clearly being ignored. The federal government must revisit proposals to allow interception of illegal e-cigarettes at the border or find another mechanism to block them.

We need to target their sale

Retailers and wholesalers are also breaking rules set out in official advice from the Therapeutic Goods Administration and corresponding information on state government websites.

Yet tobacconists, convenience stores and vape shops are still breaking the rules.

State and territory governments must enforce their laws, especially those being broken in plain view. Authorities can impose substantial fines for offenders, which would not only deter unlawful trade, it would fund additional enforcement.

There are also laws for the bulk storage and transport of schedule 4 poisons, such as nicotine. Four Corners showed how readily a film crew could expose breaches of these laws.

If young people can find them, so can the authorities

Seizing illegal imports will eventually dry up their supply, but there will be stockpiles.

If school children can access these suppliers and their products with a quick search on their smartphones, authorities can also find them and put them out of business.

What needs to happen next?

E-cigarette use in young Australians is a crisis, but is fixable. The federal government must stop illegal imports, the states and territories must end the unlawful retail, wholesale and interstate trade.

The harms of e-cigarettes are severe and far outweigh any modest benefits; there are laws to protect young people from them.

If the crisis worsens, more people will ask, how did this happen? The answer will be simple: governments made good laws, but they did not enforce them.

Read more: It's safest to avoid e-cigarettes altogether – unless vaping is helping you quit smoking

Paul Grogan is employed by the Daffodil Centre, a joint cancer research venture between Cancer Council NSW and the University of Sydney. He is an investigator on a current research project on e-cigarette use in young people jointly funded by the NSW Government and the Minderoo Foundation, with in-kind support from Cancer Council NSW. 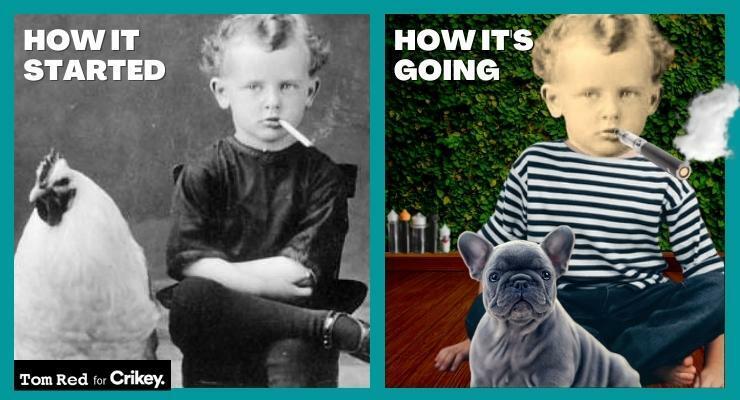 Vaping is a health danger for young kids, and governments must intervene
The number of people vaping, including pre-teens, is increasing — as is the accessibility of black market retailers on social…

As the Coalition feuded over vaping, Four Corners can reveal a lobby group gave $44,000 to the Liberal Party but…

ABC News
The FDA and Juul are fighting over a vape ban, but the role of e-cigarettes in the world of tobacco abuse is not clear-cut

On June 23, 2022, the U.S. Food and Drug Administration announced that all Juul products must be removed from U.S.…

The Conversation
Some students want to rebel and think vaping is cool and tastes good, research finds

Teachers at one Western Sydney high school said students were vaping openly in classrooms and on playgrounds.

ABC News
Editorial: Drastically reducing nicotine levels will save a lot of lives
Nicotine kills. Oh, not directly, for the most part. It’s just so addictive that cigarette smokers find it nearly impossible…

Los Angeles Times
One subscription that gives you access to news from hundreds of sites
Street sales, online dealers and convenience stores: Inside the thriving black market for nicotine vapes

Nicotine vapes are illegal in Australia without a prescription. Four Corners has investigated how Australian kids are buying them.