How Arsenal, Liverpool and Man Utd stars have fared so far at AFCON 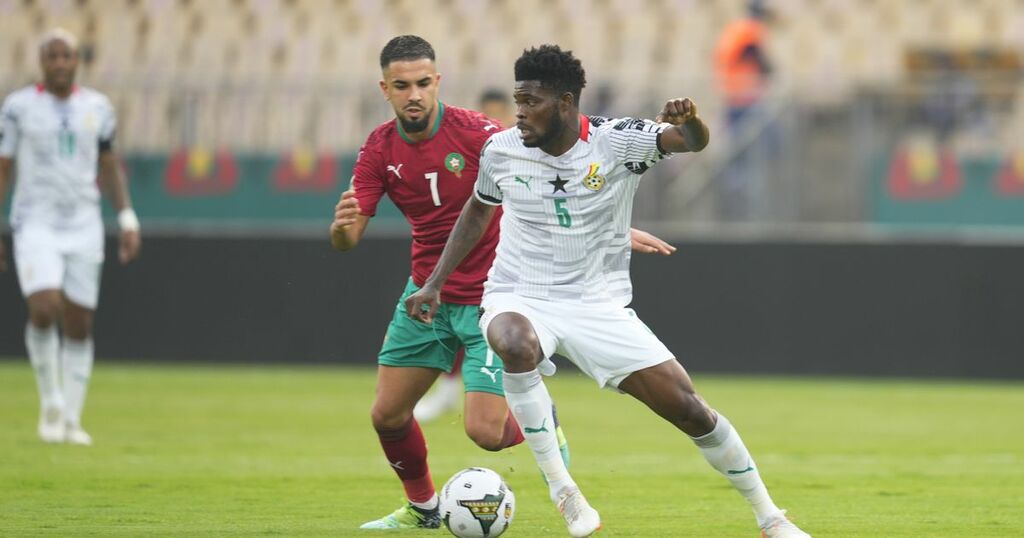 The 2021 Africa Cup of Nations is well underway and over the past four days we have seen the first round of Group Stage fixtures take place.

With six groups of four teams, there have been 12 games that have already provided plenty of entertainment and laid down a marker for what is yet to come for the remainder of the tournament.

Hosts Cameroon kicked things off on Sunday with a 2-1 victory over Burkina Faso, while there were some big early clashes such as Morocco vs Ghana, Nigeria vs Egypt and Tunisia vs Mali to kick things off in Group’s C, D and F, respectively.

And, of course, it represented the chance to see some of the Premier League ’s and Europe’s best players showcase their talents on Africa’s biggest stage.

Here is a full round-up of how each Premier League player got on in the first round of Group Stage fixtures at AFCON 2021.

Who is your favourite to win AFCON 2021? Have your say in the comments section below.

Thomas Partey started in Ghana’s 1-0 defeat to Morocco on Monday, before being substituted in additional time at the end of the game, while Pierre-Emerick Aubameyang missed out on Gabon’s 1-0 victory against Comoros on the same day after testing positive for Covid-19.

On Tuesday, Mohamed Elneny played the full 90 minutes of Egypt's 1-0 defeat to Nigeria in their Group D opener and Nicolas Pepe started on the bench for Ivory Coast's 1-0 victory over Equatorial Guinea in their Group E opener on Wednesday, but featured as a 71st minute substitute.

Omar Rekik was an unused substitute in Tunisia's Group F opener against Mali, as his country lost 1-0 on Wednesday.

Bertrand Traore captained Burkina Faso in their 2-1 defeat to Cameroon in the first game of the tournament on Sunday, providing the assist for the game’s opener and playing 86 minutes before being substituted.

And on Tuesday, Trezeguet started for Egypt against Nigeria and managed 58 minutes before being substituted in their 1-0 defeat.

Frank Onyeka's Nigeria won their first Group D game against Egypt with a 1-0 victory, although the midfielder was an unused substitute in Cameroon on Tuesday.

Ulrick Eneme Ella came on as a 66th minute substitute to help Gabon win their first game in Group C, with a 1-0 victory against Comoros on Monday.

Yves Bissouma had to settle for a place on the bench for Mali's 1-0 victory over Tunisia on Wednesday in Group F, although he came on as a 59th minute substitute to play the remainder of the second half.

Maxwel Cornet started for Ivory Coast in their Group E opener against Equatorial Guinea on Wednesday and played 71 minutes of their 1-0 victory.

Edouard Mendy missed out on Senegal’s Group B opener against Zimbabwe on Monday after testing positive for Covid-19, although it is hoped he will feature later on in the tournament.

On Monday, Cheikhou Kouyate played the full 90 minutes for Senegal in their 1-0 win against Zimbabwe, while Jordan Ayew managed 86 minutes for Ghana during their 1-0 defeat to Morocco, with both games coming in Group B.

Elsewhere, Wilfried Zaha featured as a 71st minute substitute for Burnley's Maxwell Cornet in Ivory Coast's 1-0 victory over Equatorial Guinea on Wednesday in their first match in Group E.

Alex Iwobi had to settle for a place on the bench for Nigeria's opening Group D against Egypt on Tuesday, although he did have a cameo appearance after coming on as a substitute in the 91st minute.

Nampalys Mendy missed out on Senegal’s 1-0 victory over Zimbabwe on Monday after testing positive for Covid-19, but Daniel Amartey played the full 90 minutes as Ghana lost 1-0 to Morocco in their Group C opener on the same day.

Both Wilfred Ndidi and Kelechi Iheanacho started for Nigeria in their 1-0 win over Egypt on Tuesday, with Ndidi playing the full 90 minutes and Iheanacho managing 80 minutes, who scored the only goal of the game in the 30th minute.

In Group B, Sadio Mane played the full match and converted a 97th minute penalty to secure all three points for Senegal in their 1-0 victory over Zimbabwe, while Naby Keita captained Guinea and played the full 90 minutes as they defeated Malawi 1-0 on Monday.

Mohamed Salah captained Egypt and played the whole match, although he was unable to prevent his nation from losing 1-0 to Nigeria on Tuesday.

Riyad Mahrez captained Algeria in their Group E opener against Sierra Leone on Tuesday, lasting the full 90 minutes as his side were held to a frustrating 0-0 draw.

Eric Bailly started and played the full 90 minutes for Ivory Coast in their Group E game with Equatorial Guinea on Wednesday, as the Elephants won 1-0.

Hannibal Mejbri started and played the first 45 minutes of Tunisia's 1-0 defeat to Mali in Group F on Wednesday, before being substituted at half-time.

Moussa Djenepo started and played 81 minutes for Mali on Wednesday as they beat Group F opponents Tunisia 1-0, while he also received a yellow card after 33 minutes.

Ismaila Sarr was absent through injury for Senegal’s Group B opener against Zimbabwe on Monday and has since travelled to Spain to see a specialist for treatment.

Both Adam Masina and Imran Louza featured in Morocco’s Group C opener against Ghana. Masina played the full 90 minutes but was also booked, while Louza managed 78 minutes before being substituted.

William Troost-Ekong captained Nigeria for their opening Group D game against Egypt and played the full 90 minutes as the Super Eagles won 1-0.

Said Benrahma was left on the bench for Algeria's opening Group E game against Sierra Leone and was only brought on in the 83rd minute, as his side failed to defeat their opponents in a 0-0 draw.

Romain Saiss captained Morocco and played the full 90 minutes as his nation defeated Ghana 1-0 on Monday.

Willy Bolly was an unused substitute in Ivory Coast's 1-0 victory against Equatorial Guinea on Wednesday.