How and why these tigers in Odisha changed their stripes 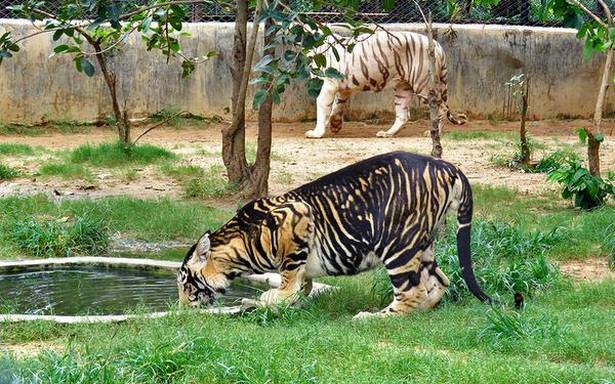 More than half a century ago, when the tribals of Similipal in Mayurbhanj district of Odisha reported sightings of “black tigers” — their stripes almost fused together in patches threatening to obliterate parts of their burnished orange coats — nobody believed them at first.

But an estimated 37% of Panthera tigris in the Similipal Tiger Reserve (in eastern India) are pseudomelanistic, characterised by wide, merged stripes.

This is the result of a rare mutation in one gene, Transmembrane Aminopeptidase Q or Taqpep, recessively inherited variants of which are responsible for the marks in domestic cats and king cheetahs. What’s more, the mutation is rarely seen in tigers outside Similipal.

The discovery of the genetic basis for the physical characteristics or phenotype in the wild is a culmination of years of research by a team of scientists led by the National Centre for Biological Sciences (NCBS).

“Our results indicate that Taqpep p.H454Y is likely absent or extremely rare outside of Similipal,” said the authors in their paper published in the peer-reviewed journal PNAS on September 14. Uma Ramakrishnan, molecular ecologist and professor at NCBS, likened it to watching evolution in action. “You can imagine it in bacteria or the SARS-CoV-2, but in tigers?”

Two factors are probably driving this change in appearance caused by the rare Taqpep p.H454Y: a founder bottleneck effect when a small subset of a large population, in this case tigers, establishes a new population, and the resulting genetic drift, where chance, more than natural selection, changes how common or rare genetic variants are.

With shrinking habitats, the tiger population becomes increasingly isolated. This causes inbreeding, resulting in a lack of genetic variation, making them prone to extinction.

Of the 12 unique individual tigers studied, four were found to be pseudo-melanistic. Vinay Sagar, a PhD student in Dr. Ramakrishan’s lab and the lead author of the paper said, “That 37% of tigers are showing a particular phenotype may not be very high. But coupled with the phenotype’s absence from everywhere else, this makes it a relatively high percentage.”

To gather information on wild tigers, researchers collected samples of their faecal matter, shed hair from scratch marks in the ground, and saliva from lick marks on a prey’s body suspected to be killed by a tiger. The DNA extracted from these samples, as well as two skins of tigers that had been seized, were compared with samples of five captive pseudo-melanistic tigers in the Nandankanan Biological Park, Bhubaneswar, and the Arignar Anna Zoological Park, Chennai.

The findings of this study offers a nuanced view of India’s tiger conservation efforts. For the endangered animal to survive and thrive in the wild, there needs to be more genetic variation. “The population at Similipal Tiger Reserve is small and potentially disconnected from other populations. It is likely that related individuals are mating with each other. That is why the driver of this evolutionary change is likely. But given the small population size, yes, Similipal tigers are undergoing inbreeding,” Mr. Vinay added.

In the paper, researchers said simulations suggest that one migrant tiger per generation would most likely result in the loss of the melanistic mutation from Similipal.

“Regardless of how the frequency of this mutation changes in the future, genetic rescue should benefit the population by increasing heterozygosity and decreasing the probability of inbreeding depression. Careful consideration would be required when selecting the immigrant,” the paper stated.

For Dr. Ramakrisnhan and her team, what began as a curiosity driven investigation — “What is the genetic basis of pseudo-melanism?” — has given them insight into the evolutionary trajectory of a small and isolated population of an endangered species, and solved a long standing mystery of why these tigers look the way they do.