How a virus crisis put Lyneham High School to the test 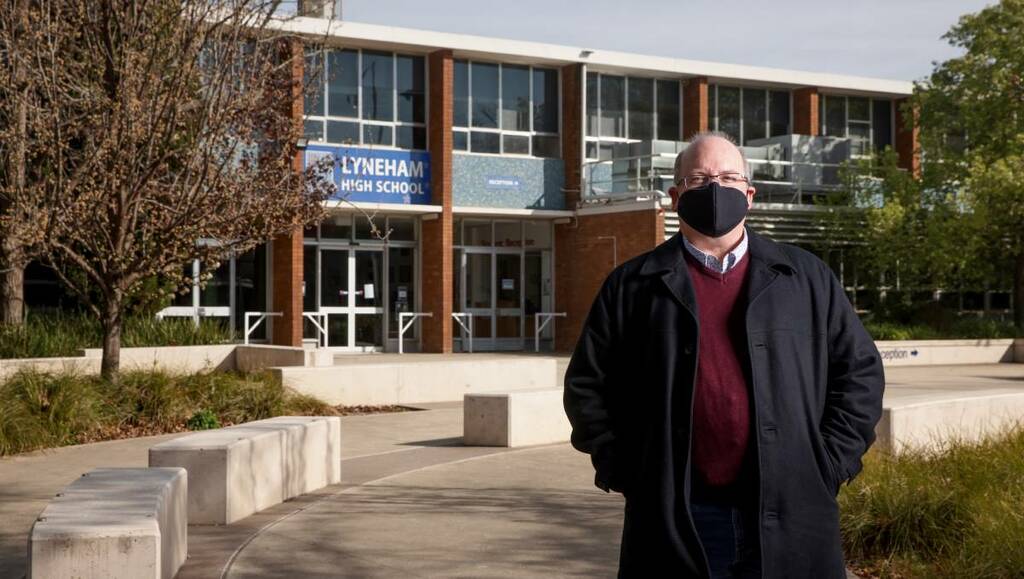 On the first Sunday after the ACT was plunged into lockdown, Rob Emanuel got the phone call no principal wants to receive.

One of his students at Lyneham High School had tested positive to COVID-19.

Officials from the Health and Education Directorates explained the student had been infectious on campus during the four days before the lockdown began at 5pm on Thursday, August 12.

Every student, staff member and visitor on campus was considered a close contact and they, along with their parents, siblings and other household members, would need to be tested and quarantine for 14 days.

By early Sunday evening emails had been fired off to all staff and families as ACT Health was organising priority testing.

Given the sense of inevitability that the territory would have community transmission as the NSW outbreak worsened, Mr Emanuel said it wasn't entirely unexpected to have a case at the school.

"When you get the phone call to say that yeah, you've got a positive case, your first concern is for the wellbeing obviously of the case, for themselves and for the families," he said.

"Having been through having a positive case last year I think we were well placed to be able to respond quickly."

Lyneham High School has 1078 year 7 to 10 students enrolled. Added to that the teachers, administration staff and all of their household contacts, there was a large number of people who couldn't step foot outside their homes to get groceries or other essential supplies and services.

Some families were struggling to get the supplies they needed as supermarket delivery services were stretched beyond their capacity, but Mr Emanuel witnessed his community share advice and offer support to people doing it tough.

"Messages from families were incredibly supportive. Students and families certainly were appreciative of the information that was coming through to them," he said.

"Our community has stepped up in situations like this, both last year and this year, and really demonstrated just how committed they were to not only their own safety and well being but also for our community and for Canberra."

Last year during the first wave a Lyneham High School student tested positive for COVID-19 on March 22. The school was shut for cleaning but only people who had had direct contact with the patient were told to isolate.

The confirmed case tally stood at 20 at the time and schools went 'pupil free' for the rest of term.

This year the delta variant has proven to be much more infectious, including among younger people.

A total of 46 cases have been associated with the cluster and three cases are still active. Fifteen cases attended the campus during the exposure period and the remaining were household contacts.

The virus affected a mixture of age groups including students, staff and their household members.

While it was a very challenging time, Mr Emanuel said there were some positive aspects that came out of quarantine and remote learning.

The time at home away from busy schedules filled with extra-curricular activities and commitments forced families to slow down and refocus their energy on their relationships.

Teachers have once again shown their creativity and flexibility by adapting their classes to remote learning.

"When we have had to go into remote learning, it's unrealistic to expect that you'll be able to complete the same amount of work, as you would if you were in a face to face classroom setting."

The school is now working with colleges to figure out how to help the year 10 students select their subjects for next year while planning an orientation day for year 6 students.

Mr Emanuel said the transition to quarantine and online learning was relatively smooth and successful.

"In times of adversity is where you see the great things come out of your community," he said.