How a tree, a dog and a chimpanzee taught Jane Goodall to hold on to hope

By Karen Tong and Meredith Lake for Soul Search 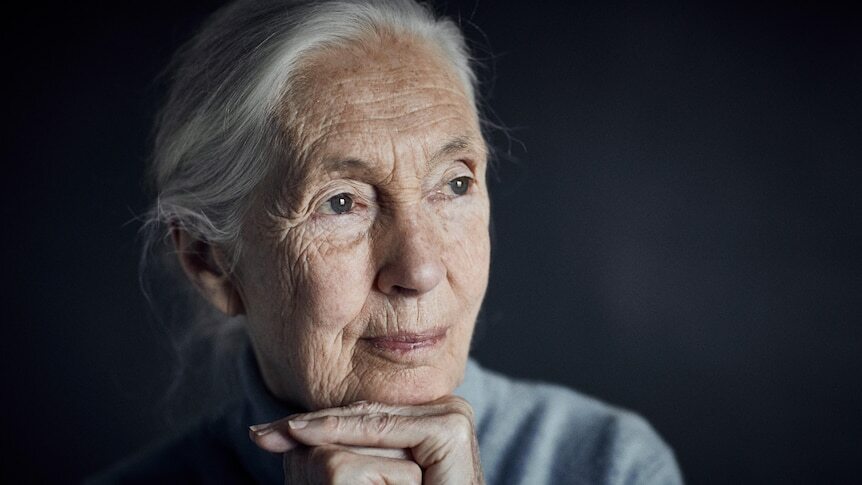 Throughout her life, acclaimed ethologist Jane Goodall has witnessed an array of environmental destruction, from deforestation to the loss of biodiversity to the catastrophic effects of climate change.

But despite this, Dr Goodall still has hope. Lots of it.

"I saw places that we had utterly destroyed, covered with concrete, but give nature a chance and she'll reclaim it," she tells RN's Soul Search.

"I saw animals on the very brink of extinction, [but] because people care, they've been given another chance."

This outlook has not come easily, and Dr Goodall credits it to a collection of "teachers" in life who have given her lessons of "humanity and hope."

Five of these most important "teachers" include a reading tree, her first dog and – of course – her beloved chimps.

The 87-year-old Dr Goodall has spent more than six decades studying chimpanzees and is widely considered the world's top expert on the species.

But long before venturing into the forests of Africa, she had an affinity with nature, specifically a beech tree in her UK childhood home which she calls one of her earliest "teachers."

"I learned about nature firsthand in my garden ... [There] was a beech tree and I called him Beech, not very imaginative," Dr Goodall says.

"But Beech was very special and up there I could feel closer to the birds and the sky."

She would climb Beech and read books as a child growing up during World War II.

"I read Tarzan of the Apes, a little tiny second-hand copy that I found in an old bookshop ... and of course I fell passionately in love with that glorious lord of the jungle. But he married the wrong Jane, I was very jealous."

Dr Goodall was awarded a PhD in ethology by the University of Cambridge in 1965 – but she did have early detractors.

Of course, she didn't listen.

"I had a wonderful teacher as a child who taught me that in this respect, these arrogant professors – of whom I was honestly a bit nervous – were totally wrong … That teacher was my dog, Rusty," she says.

"You cannot share your life in a meaningful way with any animal and not know that of course we're not the only beings with personality, mind and emotion."

Dr Goodall spent most of her life between 1960 and 1975 in Tanzania's Gombe Stream National Park, completing ground-breaking scientific research into chimpanzees.

David Greybeard was the first chimp she saw using tools and eating meat, and became one of her favourite individuals.

Dr Goodall recalls how one day, she sat near David Greybeard and held out a nut. But he turned his head away. So, she tried again and held it closer.

"He turned and looked directly into my eyes. He reached out, took and dropped the nut in one movement, and then very gently squeezed my fingers. That's how chimpanzees reassure each other," she says.

"In that one moment … I understood he didn't want the nut for some reason, and he understood that my motive in offering it to him was a good one.

"So we understood each other perfectly without the need for words."

The chimpanzees would sometimes sway from side to side with their feet in the water at the base of the fall, then climb vines and push out into the spray. She calls this their "waterfall dance."

"If you're lucky, you'll see one of them sitting, looking up at the water," she says.

"You see the eyes following the water as it comes down to the stream and flows on past them.

"So that's where I said to myself: do they have a feeling equivalent to our feeling of wonder and awe? What is this stuff that's always coming, always going, but always here?

"I just feel if they had words, if they could communicate this feeling to each other, that it might lead to one of the early animistic human religions – the worship of the water, the sun, the moon."

#5: A moment in a cathedral

In 2021, Dr Goodall was awarded the prestigious Templeton Prize in recognition of both her scientific and spiritual curiosity.

It's a curiosity that has led to many revelations in the forest, but also in urban environments.

Dr Goodall was in Paris's Notre Dame Cathedral one morning in the 1970s, when she experienced a moment of spiritual enlightenment.

"The sun was just rising and shining through the glorious rose window," she says.

"As I was looking at the sun coming through the window, suddenly the amazing organ started up with Bach's Toccata and Fugue in G minor.

"It all came together then … the amazing path through history of the couplings, of people meeting, marrying, having children, that eventually led to Bach, the brilliant mind that created that glorious music.

"That's when I consciously thought about the fact that this can't be by chance, there must truly and honestly be something behind the universe."

Hope for the future

Dr Goodall is still pushing boundaries as a conservation leader and activist – and she's still cultivating an extraordinary capacity for curiosity, wonder and hope.

"I can't wave a magic wand, but I can spend all my effort in trying to get everybody to realise that if we get together, if each one of us does what we can to make a difference every day, we start moving away from the doom and gloom," she says.

One of the things she frequently draws on is her grandmother's favourite verse from the Bible, "As thy days, so shall thy strength be."

"That to me is a very important text. Whatever problem comes along, today I can solve it."

And even the COVID-19 pandemic won't break her resolve.

"I truly think that more people, as a result of this pandemic, understand we must develop a new relationship with the natural world," she says.

"We have to stop this crazy notion that there can be unlimited economic development on a planet with finite natural resources.

"I think people are desperate for hope, especially now."

The Book of Hope: A Survival Guide for an Endangered Planet, co-written with Douglas Abrams, will be available in November 2021.