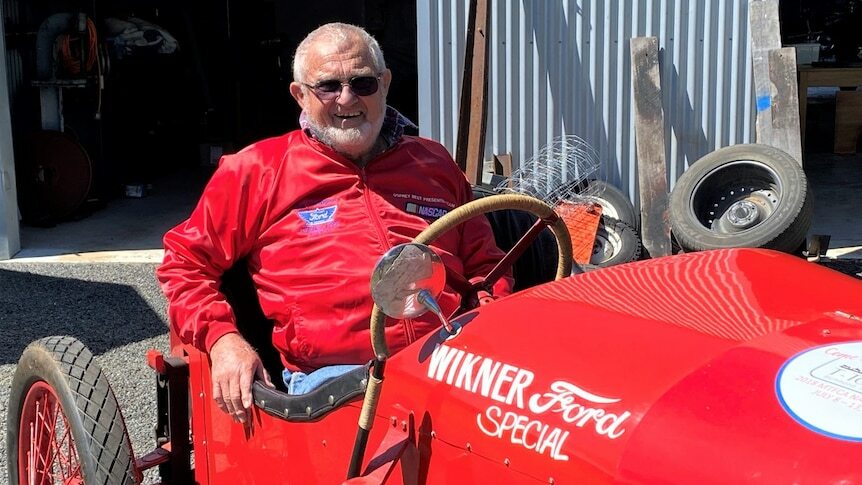 When Doug Partington spotted the car of his dreams in pieces under a Brisbane house in 1958 he never imagined it would take him to the most famous racetrack in the world.

"Mum said she'd give me 10 pounds towards it and then she asked me how much I had. I only had four pounds so Mum's thinking she's safe.

"But I went back to have another look at it and nobody else had because it was a basket case, so they took my 14 pounds. I was ecstatic."

Sixty-three years later, Doug's Wikner Ford Special – believed to be the oldest Australian log-booked racing car – will feature at the Leyburn Sprints in Queensland's Southern Downs this weekend in what could be its "last hurrah".

Doug was 14 when he pieced the car back together and breathed life into its dormant engine, unaware that he'd stumbled on a slice of motor racing history.

"The book was The Flight of the Halifax, the story of Captain Geoff Wikner flying the Halifax bomber back to Australia.

"Sure enough, there's two photos of the car and that just changed the story. We had the history."

The car was built from used Model T Ford parts in the Blue Mountains in 1922 by Geoff and Roy Wikner.

The brothers' real passion was flying, so they built the car to prove to financial backers that they had the skills to build aircraft.

The brothers put the car into the first race meet at the short-lived Olympia Speedway at Sydney's Maroubra in 1925 in front of a crowd of 70,000.

Today, the Wikner is recognised as the only known complete car to have competed in that historic race meeting.

"Maroubra was to be Australia's Indianapolis," Doug said.

"But it became known as the killer track. They didn't know enough about building tracks with high banks back then."

For much of Doug's adult life, the Wikner Ford Special sat in the corner of the garage, replaced by faster cars.

But in 2019, Doug fulfilled a childhood dream by racing in the United States.

"As a small boy I had heroes who ran at Indy," he said.

"It was the most dangerous place on Earth, but it was also the fastest."

Doug still smiles recalling the buzz of driving his beloved car around the famed Indianapolis Motor Speedway at a humble 80 miles an hour (130 kilometres per hour).

"It was a bit like being Biggles," he said.

"Here I was in my car, I'm up on the high banks and I'm absolutely loving it.

"I don't think there's many cars that have driven the Maroubra Speedway and the Indianapolis Motor Speedway."

The COVID-19 pandemic brought the fairy tale to an end and Doug rushed back to Australia, leaving his Wikner Ford Special in some very prestigious lodgings.

"The car went to live in the Paquette Avenue Plant Museum in Detroit, which is the very first official factory of the Ford Motor Company," Doug said.

"Had it not been for COVID, perhaps we would have gone back and driven it again before bringing it home."

Doug will take his beloved Wikner out for what could be its last public outing at this weekend's Leyburn Springs, where more than 300 car owners are gathering to celebrate the event's 25th anniversary.

"Its real value is its history," he said.

"It would be dreadful to crash the car because it would never be the same.

"It's just this extraordinary car hand made by two boys and the local blacksmith. We must retain that."

Doug's passion for vintage cars keeps him busy in his shed at Allora on Queensland's Southern Downs.

When one of restoration projects needs a new set of wooden spoked wheels, he doesn't have far to travel.

It's a craft he taught himself over many years and one he fears will become a lost trade, with few other keen to learn.

"I'd hate to think all of this is going to just sit here and gather dust when I'm gone," Keith said, looking around his cluttered workshop.

"Hopefully someone will come along and be interested enough to keep it going, but they just have to be dedicated enough to do it.

"It's not going to make you a million dollars, but it's a good hobby."