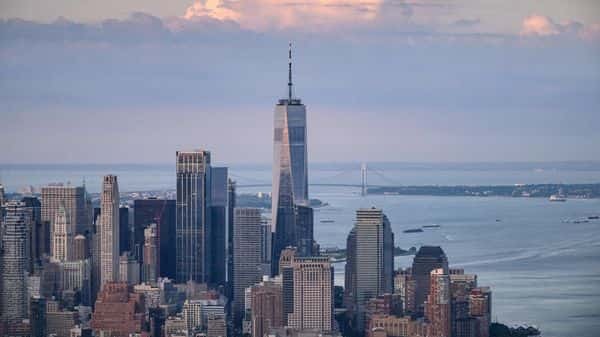 When the Twin Towers collapsed on Sept. 11, 2001, the tremors shook a bar four blocks away. The proprietor of Jim Brady’s Bar and Restaurant says it felt like an earthquake. More than 20 of his regulars died that day in the World Trade Center, and the pub was closed for weeks.

“There was no business in lower Manhattan for months," says owner Paul Quinn.

He served some first responders working at the site of the fallen towers. Volunteer workers and even tourists who stopped by for a pint and meal helped offset the loss of spending by Wall Street traders. After a few months, he says, business was booming again. Tables overflowed with out-of-towners, and new residents began to trickle in. After about a year, the pub was making as much money as it had before Sept. 11, Mr. Quinn says.

In the months after the attacks, many New Yorkers feared that the neighborhoods around the Twin Towers would become ghost towns. The opposite happened. The neighborhood’s population boomed as once-in-a-generation tax breaks gave incentive to developers to turn aging office buildings into apartments to revitalize a fading neighborhood. As Wall Street firms moved their offices to Midtown or New Jersey, software engineers and graphic designers took their place. Tourists crowded into the area’s new shops and museums, including ones that paid tribute to the victims of Sept. 11. The area had 348 bars and restaurants the year the planes struck the Twin Towers. By 2020, that figure was 557.

Larry Silverstein, the property developer who leased the World Trade Center a few weeks before the attack and later rebuilt much of it, says he didn’t initially expect the area to change the way it did. “Once we saw it beginning to happen, we began to hope and pray that it would go all the way," he says. “It sure has."

The ballooning costs of the One World Trade Center office tower and the Santiago Calatrava-designed train station and mall complex cost taxpayers billions of dollars. More than 18% of lower Manhattan’s office space is available for lease, according to real-estate firm Colliers. With more companies embracing remote work and with more office space available in places like the new Hudson Yards neighborhood, there is little prospect of downtown offices filling up again soon.

Lower Manhattan’s economy depends on office workers and tourists more than most other parts of New York City, and the spread of the Covid-19 Delta variant makes it unlikely that many of them will return soon.

On the evening of Sept. 10, 2001, the neighborhood was an office district dominated by financial companies, some that had been there for decades or longer. It had few residents. Streets emptied out at night and on the weekends when bankers and insurance brokers returned home, often to New York’s Westchester County or Connecticut.

Over the next 20 years that changed. As real-estate developers converted office buildings into apartments, the area’s residential population grew to an estimated 64,000 by 2019, up from 25,000 in 2001, according to the Alliance for Downtown New York, a business-improvement district. The financial sector’s dominance of lower Manhattan waned. In 2001, finance and insurance companies accounted for 55% of employment. In 2020, they accounted for 30%, according to the alliance.

The neighborhood had been in transition before 9/11. The area benefited from the growing number of high-earners who wanted to live in urban centers and from the residential boom in nearby Brooklyn, which made locating a creative business in a downtown Manhattan office tower appealing. Financial-services firms had been gradually leaving lower Manhattan for decades, as newer office buildings lured them to Midtown and the internet made it less important to be physically close to the New York Stock Exchange.

Office-to-apartment conversions started to pick up in the 1990s, spurred by state tax breaks for developers. In 1995, the state created a tax-break program to subsidize the conversion of offices to apartments in lower Manhattan. The neighborhood suffered from high office vacancy rates as financial firms emigrated to Midtown, and the hope was that conversions would help revitalize it.

The influx of federal and state funds after 9/11 sped up the pace of change, says Carl Weisbrod, a senior adviser at HR&A Advisors and the former head of the Lower Manhattan Development Corporation. Government officials wanted to revive an economic center of the U.S., and many also believed that redeveloping the area was crucial to the national psyche after the terrorist attacks.

Taxpayers helped pay for new public parks. Two new train stations made it easier to reach other parts of the city. A new mall lured visitors downtown and from across the Hudson River.

Developers learned to appeal to the new types of business flocking to the Financial District. Silverstein Properties, for one, initially designed the 3 World Trade Center office tower with the type of large floors that banks like to fill with traders.

“As time progressed and we moved forward with the building I became concerned. Who the hell was going to take that space? We expected financial firms to require it, and they didn’t," Mr. Silverstein says. “And then the damnedest thing happened. An advertising company came in to look at one of those floors and said, ‘How many do you have?’ I said, ‘How many would you like?’ They took the whole bunch."

The construction of the 9/11 Memorial and Museum and of a neighboring mall also helped spark a tourism boom. The number of annual visits to the area more than doubled to 17.1 million by 2019, according to the Alliance for Downtown New York, and the number of hotel rooms tripled.

Before 9/11, the Jim Brady’s pub used to close on the weekends, says owner Mr. Quinn. “You could shoot a cannon off in front of Jim Brady’s and it would hit nobody because there was no one around," he says. In the years after 9/11, the pub started opening on weekends.

The Covid-19 pandemic put an abrupt end to the boom. The number of tourist visits to the area fell 81% in 2020 from a year earlier, according to the alliance.

Dipak Banik, owner of Trader’s Express Deli, says his revenue is down by 70%. If it wasn’t for a pandemic-relief loan from the federal government, he would have had to close, he says. More than a quarter of lower Manhattan’s shops closed in 2020 and 2021, according to the alliance.

“We’re talking about the 20-year anniversary, the incredible strides we’ve made," say Jessica Lappin, president of the alliance. “But it’s been 20 years."

Jim Brady’s Bar and Restaurant closed its doors on St. Patrick’s Day 2020, during the pandemic lockdown.

Mr. Quinn is worried about a rise in crime and whether it makes financial sense to run a business here. In recent months he decided not to reopen. “I could not see myself coming back," he says.