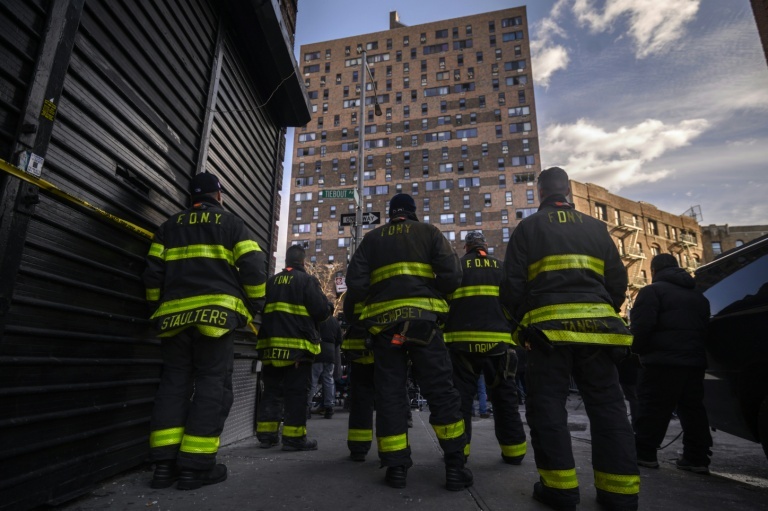 Washington (AFP) - Two deadly fires that killed dozens of people in recent days have underscored the dilapidation and scarcity of housing available to poor Americans who rely on government assistance to afford a place to live.

A blaze blamed on a portable electric heater killed 17 people including eight children at a high-rise apartment building in New York's working-class Bronx borough Sunday, days after 12 people died when a fire broke out in a public housing unit in Philadelphia where dozens of residents had crammed into apartments.

That the two tragedies, which are the worst residential fires either east coast city has seen for years, happened in housing intended for low-income residents is not a coincidence, housing advocates say.

"The first thought when I read the news was, I'm certain, based on the building and location, that this was low-income housing," Jenna Collins, a housing attorney at Community Legal Services in Philadelphia, said of the fire in New York.

"I was even less surprised to hear reports now that it was space heater that caused that fire," she added, noting that it is not uncommon for homes either owned or paid for by the government to have insufficient heating during the winter.

Real estate has become a valuable commodity during the Covid-19 pandemic as US home prices have climbed to record levels.

The increases have pushed poor Americans even further away from home ownership, while the stock of government-owned or -subsidized housing available to them is in some cities plagued by a yawning maintenance backlog that creates the conditions for disaster.

"This is housing that's been for the most neglected," said Lena Afridi, acting executive director of the Pratt Center for Community Development in New York.

"People live where they can afford to live, in both cases, and people settled for places that might not be safe because that might be preferable to homelessness.But that should not be the dichotomy we set up."

In both the Philadelphia and New York metropolitan areas, there were fewer affordable housing units available than the national average of 37 for every 100 poor renters.

That shortage leads to situations like the one in Philadelphia, where a fire official said the building the burned housed about 26 people, eight on the first floor and 18 across the second and third floors.

City authorities said in a statement that they had inspected the building and found its fire alarms were working in April and May of last year, but they were not working at the time of the fire.

"Having that level of loss of life really has to do with the overcrowding in that unit," Collins said of the disaster in which eight of the dead were children.

Before the fire, the residents of the property were in some ways lucky: Philadelphia's waiting list for public housing has been closed for years to new applicants, and Collins said some applicants have been on the list for decades.

In New York, the 19-story building that burned on East 181st Street was home to many tenants who relied on a government rental assistance program, US media reported.

Afridi suspected a lack of maintenance contributed to the disaster, pointing to reports that tenants had relied on heaters to keep warm and had heard so many false warnings from the fire alarm that they initially ignored it.

In Washington, President Joe Biden proposed channeling billions of dollars towards affordable housing in his Build Back Better proposal, but the massive spending bill is deadlocked in Congress.

Afridi said new homes are just part of the solution.

"It's less about building new housing stock and more about making sure what we have is safe," she said.