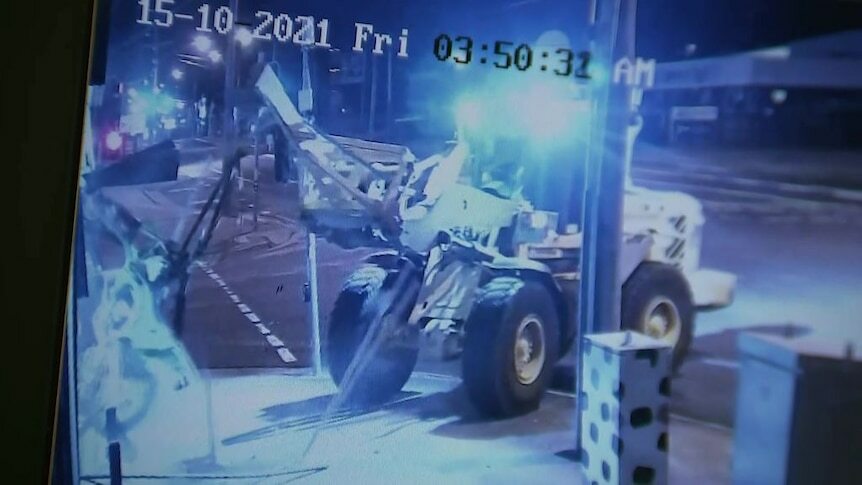 Rail commuters on the Ipswich-Rosewood line can expect continued delays after a suspected stolen tractor was driven along tracks west of Brisbane, damaging the train line.

Police said the loader was first used in a ram raid on a motorcycle shop in West Ipswich just before 4:00am.

Officers pursued the offender who then abandoned the machinery near Dinmore Station.

As the vehicle re-entered the rail corridor at Dinmore it become stuck in a ditch, police said.

A 41-year-old male driver attempted to flee on foot but was apprehended by police a short time later.

Police said the man is helping them with their inquiries.

Inspector Darren Green said a member of the public contacted police at 3:45am with reports of a tractor being driven into a shop.

Inspector Green said when police located the vehicle there were "a couple of motorcycles on the boom and they were being loaded into a truck".

"These motorcycles were dropped by the driver as he drove towards police," he said.

Inspector Green said police would investigate whether the tractor was stolen from Queensland Rail.

"I did notice the Queensland Rail label on it, but we don't know where it has come from or how he has come into possession of it," he said.

Garvan Cannon from Ultimate Motorbikes in Ipswich said the damage to his store was extensive.

"We had a bulldozer proceed to drive through the front window," Mr Cannon said.

Mr Cannon said the story had been broken into previously but had experienced "nothing to this extent before".

Earlier today all trains between Ipswich and Darra stations were suspended while transport workers attempt to fix the damaged tracks but stations from Darra to Redbank are now open.

The line between Redbank and Rosewood remains closed in both directions.

"Our crews are completing extensive inspections and will complete any required repairs before resuming services," Mr Easy said.

"We’ll keep customers informed and encourage them to continue checking the TransLink website for service updates."

Mr Easy said the tractor also hit a stationary train at Ipswich that had no one onboard.

He said limited damage was done to the train and Queensland Rail would conduct an investigation into the incident.

Ipswich commuter Kelvin told ABC Radio Brisbane this morning he had been waiting for a train to Redcliffe for two hours from 5:00am to 7:00am without information, as Queensland Rail arranged buses.