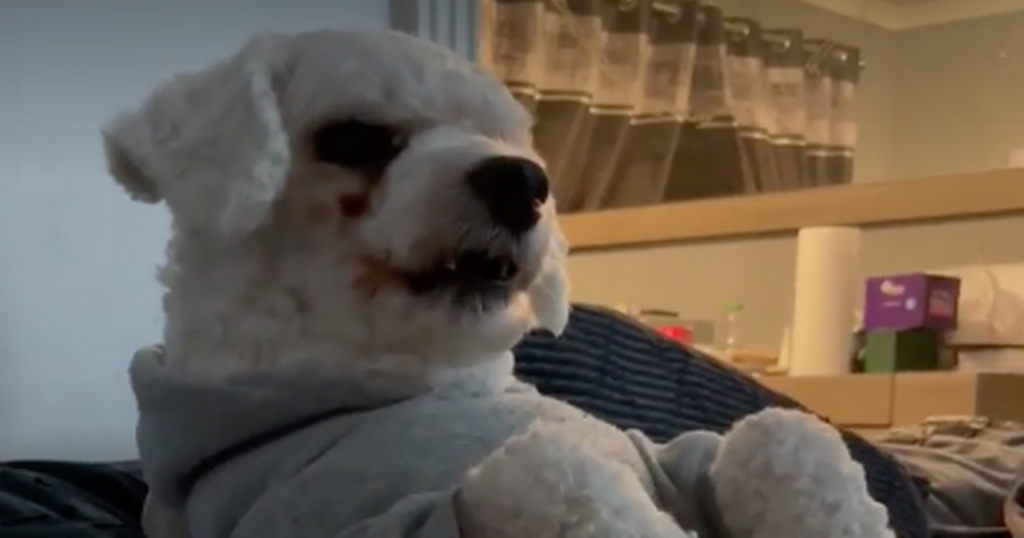 A dog - branded a four-legged Houdini - vanished sparking a huge rescue mission in a Scots town before being discovered sleeping inside a couch.

Cheeky Bichon Frise Bleu had lots of people - including local police - looking for him in a three-and-a-half hour search before the discovery was made.

Owner Leanne Bradley from Uddingston, Lanarkshire, said she felt 'sick to her stomach' and feared her pooch had been stolen.

Several members of the community were out searching streets, a graveyard and neighbouring villages for Bleu.

The three-year-old dog had been playing in the garden of his home before 'going missing' around 7pm on Tuesday night.

Leanne and her husband Steven had lifted the couch around that time looking for their TV remote and they suspect that is when Bleu sneaked inside.

But neither of them noticed and were panicked when Bleu did not respond to their calls.

Mum-of-one Leanne, 42, told the Record: "I actually felt sick to the pit of my stomach.

"I've got four Bichons - mum Bubbles, dad Bleu and two daughters Bella and Bonnie. When I came home on Tuesday night I opened the back door to let the dogs out.

"My back garden is completely enclosed and it has a six foot fence, so there's no chance any of my dogs can get out, unless someone intervenes.

"Bleu is very vocal. He doesn't allow any animals near him. He barks a lot - but they were all out the back and we hadn't heard any noise from them.

"Meanwhile, my husband, as usual, had lost the TV remote we were looking for it"

Leeane's husband Steven lifted the couch up and they recovered the remote from underneath.

A short while later Steven called the dogs in from the garden.

Leeane said: "Steven was calling the dogs in but he could only see three of them.

"I couldn't find Bleu anywhere. We were shouting on him. I went right round the back with a torch and my son checked upstairs - but nothing.

"We hunted high and low but couldn't find him - and I started panicking.

"I was shouting and shouting, and I just started thinking something must have happened to him.

"Steven went away looking round the estate and I jumped in the car with my son Callum. I was asking people had they seen him, but nothing."

Leanne - who is a technician for Hive - called her mum, dad, neighbour and friend to ask if they could help with the search.

She put posts up on several local Facebook pages asking if anyone had seen Bleu.

"By this point I was freaking out," she said. "We went searching around Uddingston, down to Raith, we were absolutely everywhere.

"Folk were searching around graveyards. I phoned the taxi company - and then I had to phone the police to report him stolen.

"I was just thinking, he will be so frightened, won't know where is. I even had it in my head he could be getting used as a bait dog at one of those puppy farms."

At 10.30pm Leanne was sitting devastated in her car outside the house when Steven appeared at the living room window.

Steven started shouting: 'Leeane, he's been found. He was inside the couch."

Leanne thinks a rip in the underside of the couch must have given Bleu access.

She said: "There's a rip underneath the couch, so when we lifted it to get the remote, Bleu must have miraculously managed to sneak in behind us and managed to get to that bit. Then Steven has put the couch down and he has ended up inside the couch."

Leanne said: "Steven was in the house all this time and he didn't even make a noise! Then when he finally sat down on the couch he heard a whimper.

"We couldn't believe it. I just grabbed him. I was so relieved. My nerves were shattered.

"Then I had the embarrassment of having to phone the police and the taxi company back. Thankfully they saw the funny side."

Little Bleu had built up an appetite after causing all the commotion.

Leanne said: "He wanted his dinner, so Steven fed him and gave him some water.

"Then he has the bloody cheek to jump back onto the couch, curl up into a ball and go straight back to sleep!

"I was like, 'are you serious?!' He's an absolute nightmare - our very own Houdini!"