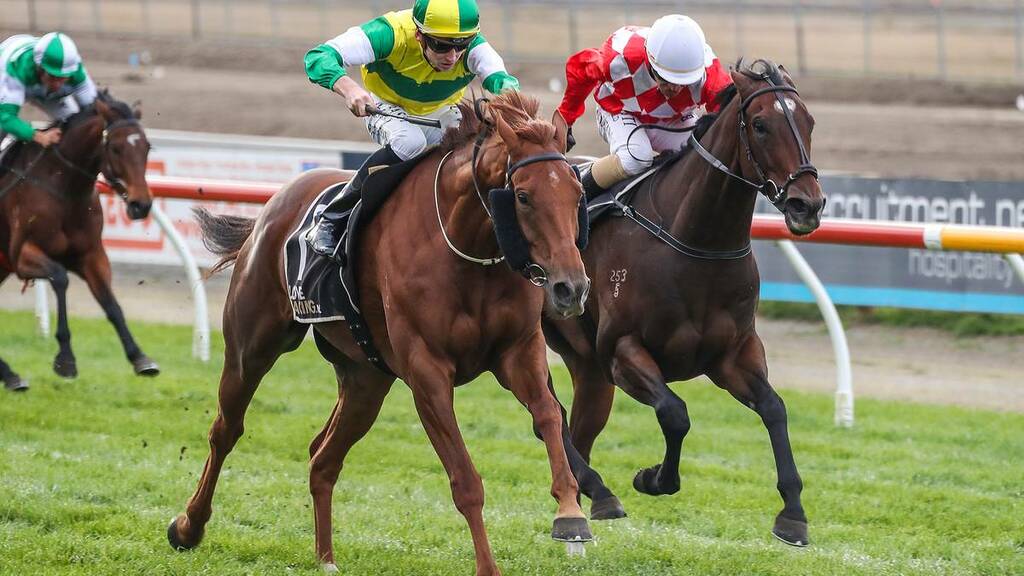 Trainer Graeme Rogerson is confident Beauden is ready to show he can beat the best away from Awapuni.

Beauden was joint favourite yesterday along with Savy Yong Blonk for Saturday's Group 1 Livamol Classic (2040m) at Hastings after finishing second in the Group 3 Metric Mile (1600m) on September 25 while carrying 60.5kg, 7.5kg more than the winner, House of Cartier.

That effort reinforced how good he is at Awapuni. From 11 starts at the Palmerston North track, he has won eight times, finished second twice — including that massive weight-carrying effort at his last start — and fourth on the other outing.

The victories include the Group 2 Awapuni Gold Cup (2000m) last season, when he beat Prise de Fer, one of his rivals on Saturday, and Callsign Mav.

However, he has won just four times away from Awapuni, and his record at Hastings isn't great. The best he has done in five starts at Hawke's Bay is one second and one third.
In last year's Livamol Classic, he was 11th of 16.

"To be fair, he wasn't right when he went to Hawke's Bay last year, and in a couple of other races there, he had big weights. Weight-for-age certainly helps him," Rogerson said.

"I couldn't be happier with him. Saturday will tell," he said.

Rogerson had enough of an opinion of Beauden that he had looked at the Caulfield-Melbourne Cup double but he and owner Joan Egan decided against it due to the difficulties of getting a spot in managed isolation and quarantine coming back from Australia.

However, Rogerson hasn't given up hope of getting Beauden to Australia this season.
"We're going to make a final decision after Saturday, but at this stage, it looks as though we'll aim at the Wellington Cup [Group 3, 3200m] and then we may go over in the autumn."

Beauden won't be the only runner from the stable looking at weight-for-age spoils over the weekend, as his top sprinter Mascarpone heads for the Group 3 Sweynesse Stakes (1215m) at Rotorua on Sunday.

Mascarpone was impressive winning the Group 2 Foxbridge Plate (1200m) at Te Rapa on September 4 and put up another great effort in handicap conditions on the same track on October 1, going down by a neck to highly-regarded Brando.

"He carried 62kg and gave away 8kg to the winner, so it was a great effort. I'm very happy with him," Rogerson said.

In addition to Beauden, Rogerson has six other runners heading to Hastings, the most interesting of which is possibly Drum Major, who contests a 3-year-old race over 1300m.
Drum Major caused a minor surprise when winning at Taupo on September 17, beating the highly-regarded Dark Destroyer, an impressive winner at his only subsequent start.

He then had to be used up from a wide barrier in the Group 3 Hawke's Bay Guineas (1400m) and did well to fight on for third behind Mana Nui and Wakari.

Exciting 3-year-old Wakari will have his final hit-out ahead of his trip to Riccarton next month when he contests the NZB Ready To Run Sale Trainer Series 3YO 1300 at Hastings.
The Roydon Bergerson-trained gelding has contested the previous two days of the Hawke's Bay Spring Carnival, winning the Listed El Roca-Sir Colin Meads Trophy (1200m) before finishing a gallant runner-up behind Mana Nui in the Group 2 Hawke's Bay Guineas (1400m).

"He's a competitive horse and tried really hard [in the Guineas]," Bergerson said, adding he was pleased with his work yesterday.

"He just had a quiet week after the Guineas and went well [yesterday]. I can't fault him." NZ Racing Desk