Horse Power: Isle Of Lismore and Lucander to be Saturday winners

ISLE OF LISMORE can win the Lester Piggott First To Last Handicap (2.40pm) at Haydock Park ’s final Saturday afternoon Flat meeting of the season. While in the day’s big race, the bet365 Cambridgeshire Handicap (Heritage Handicap) (3.40pm), LUCANDER can come out of top.

On Merseyside Robert Cowell’s sprinter can follow up his recent win at Newmarket last month with another success on Merseyside.

The four-year-old gelded son of Zebedee has been in good form this season – as well as his Newmarket success, he also scored at Windsor in July and was second at Sandown last month with the winner Chipstead franking the form with victory at Doncaster last week.

Isle Of Lismore seems to go well in any ground, but has won on a softer surface so any further rain would not inconvenience him.

He generally starts his races well and stayed on in good style at Headquarters. He has never run at Haydock but looks the type to go very well in what looks a typically competitive sprint.

The four-year-old won over seven furlongs at Haydock back in May and has been consistent since, winning at Doncsater and finishing fourth back on Town Moor last week. He can go close to another victory again.

Kevin De Foy’s LIVERPOOL KNIGHT hasn’t quite gone on from his Windsor win on his seasonal reappearance.

The four-year-old gelded son of Golden Horn disappointed slightly over course and distance in the Old Newton Cup in July – but he is still open to more improvement and may resume that progress with victory in the finale, the Lyme Wood Handicap (5pm).

Others who can win on Merseyside are the Richard Hannon-trained duo BALMAHA and NANGA PARBAT in the British Stallion Studs EBF Fillies’ Novice Stakes (GBB Race) (1.30pm) and the Paramount Digital Nursery Handicap (4.25pm) respectively; and Charlie and Mark Johnston’s BLUE ANTARES in the Zachary Daniels EBF Maiden Stakes (3.50pm).

At Newmarket Ralph Beckett’s Lucander may be another big-priced winner of the bet365 Cambridgeshire Handicap (3.40pm). The 1m1f feature has gone to many outsiders over the past decade or so with 100-1, 50-1 scorers and two 40-1 winners in the last two runnings.

So sometimes it pays to look away from the obvious, despite the very real claims of market leaders, the Willie Haggas-trained duo of Mujtaba and Protagonist .

Lucander was runner-up to the reopposing top weight Majestic Dawn in this race off two years ago and also 11th in last season’s renewal. He has won once this season at Windsor and is back down to a 1lb lower than the mark from which he was second in the Cambridgeshire in 2020.

He can go close again to victory with Marcus Tregoning’s Perotto and the Jamie Osbourne-trained Ouzo other outsiders to consider each-way, particularly with several bookmakers paying out on fifth, sixth, seventh and eighth places.

Blackbeard has won five of his seven starts, with one of his only defeats when fourth in the Coventry Stakes at Royal Ascot.

But the two-year-old son of No Nay Never has won twice in France since and on his recent Group One victory in the Prix Morny at Deauville, he looks the one they have to beat... and they probably won’t.

Meditate did win at Royal Ascot in the Albany Stakes, but lost for the first time in five starts when second to Tahiyra in the Moyglare Stud Stakes at the Curragh two weeks ago.

She can resume winning ways ahead of Hannon’s Trillium .

Charlie Appleby and Godolphin can also land a juvenile success with FLYING HONOURS, to be ridden by Liverpool FC fan William Buick, expected to bring up a hat-trick in the Group Two Juddmonte Royal Lodge Stakes (1.50pm).

Others who may score at Headquarters are Ed Walker’s ROSE PRICK in the British Stallion Studs EBF ‘Jersey Lily’ Fillies’ Nursery Handicap (4.50pm); Beckett’s VERBIER in the Blandford Bloodstock Maiden Fillies’ Stakes (Gbb Race) (4.15pm); and ZAINALARAB , from in the in-form Roger Varian stable, in the finale, the Racing TV Handicap (5.25pm).

Andrew Balding’s AUSTRALIAN ANGEL may bounce back from a slightly below-par effort at Haydock earlier this month to return to winning ways in the Envirosips Handicap (4pm).

Others who can score on the Roodee are the John Quinn-trained course and distance winner POET'S MAGIC in the Boulton Group Handicap (2.15pm); Haggas’ KYEEMA in the Mr & Mrs Dobson Nursery Handicap (2.50pm); Sir Michael Stoute’s PREPENSE in the Boodles Ashoka EBF Novice Stakes (GBB Race) (1.40pm); and HELLO ZABEEL , from the Charlie Fellowes’ stable, in the Deepbridge Innovative Investing Handicap (5.10pm). 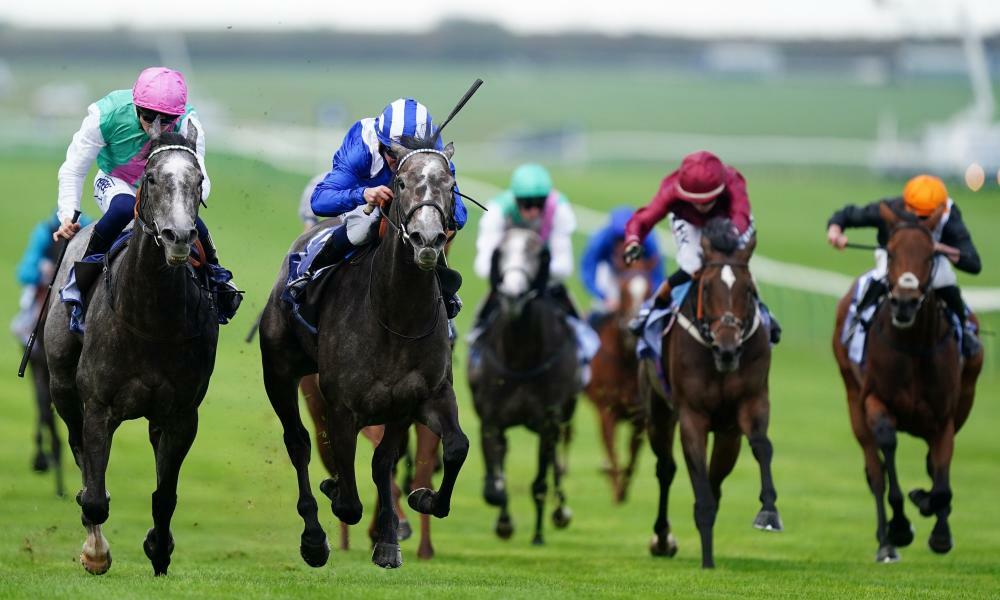 Hollie Doyle's mount Tempus chases a four-timer at Newmarket's Cambridgeshire meeting on Friday. Seven races are on the ITV schedule…

Mr Wagyu is Newsboy's tip for the Virgin Bet Ayr Gold Cup. At Newbury, Shouldvebeenaring can enter the winners enclosure…

Four Group 1s are among the races on a cracking card, which includes the Irish St Leger