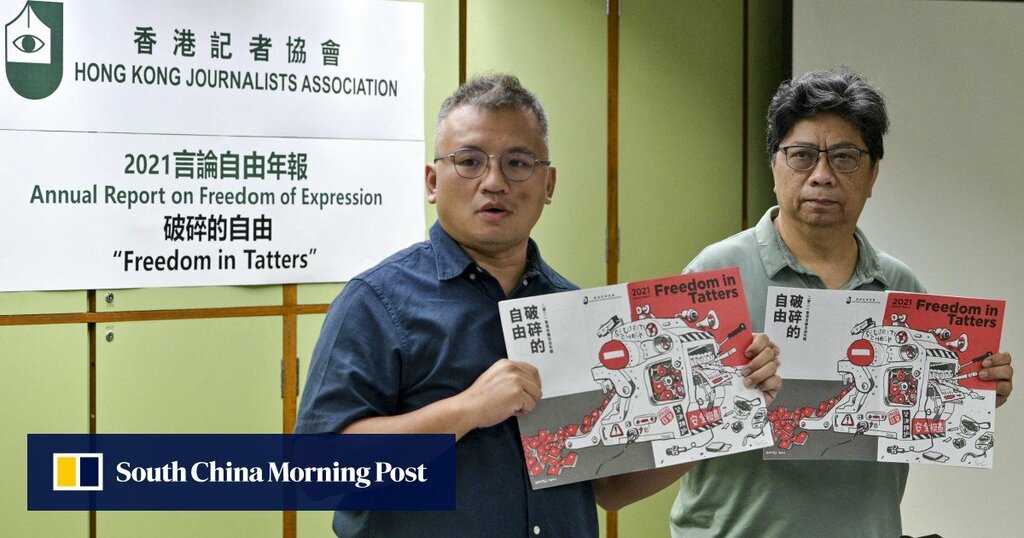 Hong Kong’s security chief has stepped up his war of words with the city’s biggest journalists group, challenging it to disclose its financial records and membership list to alleviate “public concerns” about its ethics.

But the idea was swiftly shot down by the Hong Kong Journalists Association (HKJA) on Wednesday, who called Secretary for Security Chris Tang Ping-keung’s suggestion “illogical”, saying divulging its member rolls would violate the city’s privacy laws.

Tang, who a day earlier, in an interview with a pro-Beijing outlet, accused the group of “infiltrating” local schools to lure student journalists, on Wednesday said it was his duty to “cast doubt” on the body following what he claimed were public complaints.

Tang also addressed HKJA chairman Ronson Chan Ron-sing’s Monday assertion that only 13 per cent of the group’s membership were students.

“[The HKJA] should explain, for example, in the past five years, did you visit any school and promote your own political ideas?” he said.

“To alleviate public doubts, the association should also consider disclosing the [amount of] money it has received in recent years, as well as the sources of that funding, and whether it was donated by foreign political organisations or people with clear political inclinations.

“Without disclosing any personal information, it should also consider disclosing its membership list to show people which media outlets or schools its members are affiliated with.”

Security chief hits out at news groups, accusing them of ‘infiltrating’ schools

In a statement released on Wednesday afternoon, the association responded: “We are of the view that Tang’s suggestion is illogical and simply incomprehensible. We hope the secretary can understand that the media agency a member works for is also part of his or her personal data.

“We cannot disclose a member’s personal data without his or her consent. [Tang’s request] is no different than asking us to breach the privacy law.”

The association added that it had 486 members, including 331 full members, 22 associate members and 34 PR members. There were also 56 student members and 43 retired or permanent members.

The association did not disclose the names or number of media agencies from which their members hailed.

In a separate briefing, Ronson Chan said the journalists association had never received any overseas funding.

“We have annual reports and our account statements are audited and furnished annually to the Registry of Trade Unions. If Tang would like to have a look, he can approach the labour secretary for help and there is no need for him to request us publicly to do so,” Chan said.

He also rejected Tang’s suggestion the association had “infiltrated” schools to lure student journalists, saying while members were sometimes invited to give campus talks, they were never political in nature.

In an interview with the Ta Kung Pao newspaper, Tang had accused the group of pushing the idea that “everyone can be a journalist”, something he said violated journalistic ethics.

But the association said the phrase was not a concept it advocated, but rather a standing legal principle it sought to safeguard.

Chan on Wednesday maintained that freedom of the press was guaranteed under the Basic Law, the city’s mini-constitution, and that “all citizens”, including schoolchildren and undergraduates, enjoyed the right to undertake reporting tasks in public areas.

“What is important is not who is there to cover the event, but what the reporter is doing there and how he or she deals with the situation,” Chan said.

He added that he would advise student reporters against attending any scene that could be deemed too dangerous.

Chan also asked the security minister to be mindful of his comments. “Tang is a senior official. Is he trying to threaten us or exert pressure on us or just to offer some gentle reminders?”

While a number of opposition-leaning groups have disbanded or are planning to fold after high-profile attacks by pro-Beijing figures or senior officials, Chan said his association would not bow to the pressure. “The journalists association has not breached the national security law. We have nothing to fear.

“We will not easily give up and disband in face of pressure and we will stay put until the very last minute.”