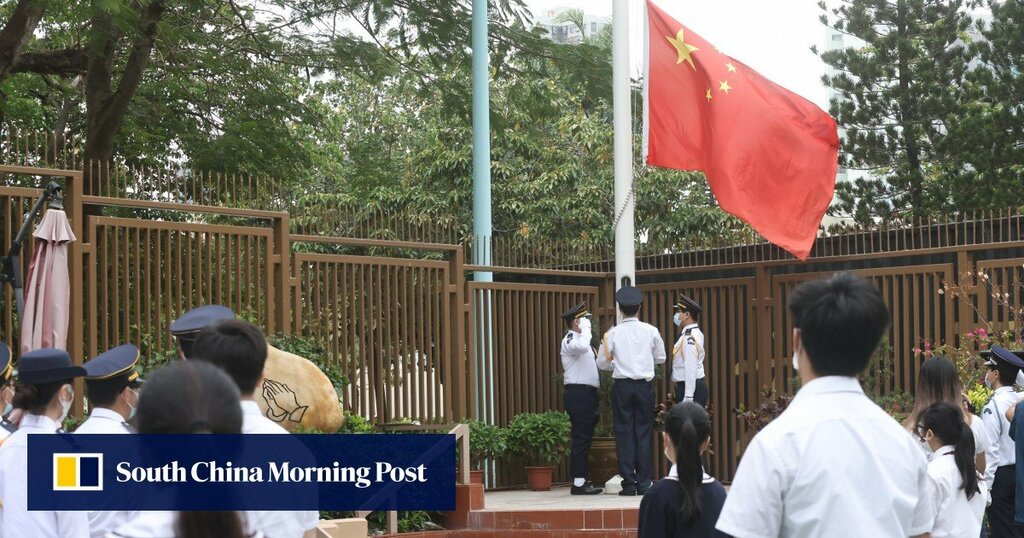 Schools must stage ceremonies raising the national flag at least once a week from next year and ensure it is displayed every day during term time under new guidelines issued by the Hong Kong government.

The Education Bureau circular released on Monday made no mention of penalties for non-compliance, but stated that students found to have behaved improperly during the ceremonies should be stopped or removed from the venue.

The national anthem must be played and sung at the ceremonies, which should be attended by the entire school community and held on special occasions as well as on a weekly basis, the circular says.

Such occasions include graduation and sports events in addition to New Year’s Day, the July 1 celebration of Hong Kong’s return to Chinese sovereignty and National Day on October 1.

Schools are asked to display the Hong Kong flag alongside the national one if there are enough poles. All students, teachers and staff at the school should attend the flag-raising ceremonies “as far as practicable”.

The new guidelines – to take effect on January 1 next year – were issued after the Legislative Council last month amended the National Flag and Emblem Ordinance to ban turning the ensign upside down and its casual disposal.

A bureau spokesman said the move aimed to “promote national education and help students develop a sense of belonging to the country, an affection for the Chinese people and enhance their sense of national identity”.

The spokesman added that cultivating students’ sense of national identity was one of the key learning goals of primary and secondary education, and also the educational obligation of schools.

The rules apply to all schools in Hong Kong, but there is more leeway for kindergartens, which should observe them “as far as conditions permit”, while international schools offering non-local curricula are “encouraged” to do so, according to the spokesman.

“Students studying in international schools around the world should have knowledge of the local culture and history. They should also show respect for the national flag, national emblem and national anthem as the symbols of the country where they are in,” supplementary notes to the bureau’s guidelines state.

“For the international schools in Hong Kong, as most of them have admitted local students, they are encouraged to refer to the requirements specified in the [circular], and display the national flag on each school day and conduct a national flag-raising ceremony weekly based on the actual school circumstances, so as to enhance local students’ sense of national identity and deepen foreign students’ understanding of the Chinese culture.”

Schools are being encouraged to explain to parents the need for their children to take part in the ceremonies.

Federation of Education Workers vice-chairman Tang Fei, also the principal of Heung To Secondary School (Tseung Kwan O), said he did not expect schools to have much difficulty in observing the new measures, although he noted that extra administrative work might be required to hold ceremonies so regularly.

“Almost all government schools have been displaying the national flags on campus for some time. For government-aided schools, maybe some of them may need to buy flagpoles,” Tang said.