By Lily Kuo and agencies

Foreign students have started fleeing Hong Kong as political unrest paralysed parts of the city for a fourth day in a row.

Many roads were empty and schools were closed as protesters faced off against police and disrupted transport links.

Police fired teargas at a group of protesters near Polytechnic University in the morning. In the evening, student demonstrators blocked campus entrances in preparation for further clashes with police. Protesters set tollbooths on fire in tunnels connecting Kowloon and Hong Kong.

In recent days, universities have become a focus of battles between riot police and anti-government demonstrators demanding greater democracy. On Tuesday police raided the Chinese University of Hong Kong, setting off violent clashes and a swell of criticism.

On Thursday students from Europe as well as mainland China and Taiwan were leaving the city after a night of clashes that resulted in several serious injuries.

A 15-year-old believed to have been hit in the head by a teargas canister reportedly sustained a skull fracture, and an elderly worker for the Food and Environmental Hygiene Department was struck by an object during a scuffle between protesters and resident. Both were reported to be in critical condition.

A man in his 30s dressed in black was found dead in Tsuen Wan in Hong Kong’s New Territories, according to police, who said he appeared to have fallen from a building.

Nordic students at Hong Kong Baptist University were being moved after anti-government demonstrators moved on to its grounds, and the Technical University of Denmark (DTU) urged its 36 students in Hong Kong to return home.

Elina Neverdal Hjoennevaag, a Norwegian student, told the broadcaster NRK on Wednesday they were being sent to a hotel, adding: “I don’t really know what is happening. I must pack.”

Related: Peace more distant than ever in Hong Kong as battle grips universities

She said she and several other exchange students had been told to pack and move away. “People walked out with their suitcases. Many cried.”

The Norwegian foreign ministry said on its website that “students should continuously evaluate campus safety if teaching is interrupted due to protests”.

Anders Overgaard Bjarklev, the head of DTU, said the decision to move came after some of the riots shifted to the campuses. “Some of our students have been forced to move from their dormitories because they were put on fire,” he said, adding that DTU would resolve “any academic challenges associated with the interrupted course”.

After more than five months of demonstrations – initially over an extradition bill that would have allowed suspects to be sent to mainland China – violence has reached a new height following the death of a demonstrator last Friday. On Monday police shot a 21-year old student at close range in the stomach and a 57-year old man was set on fire while arguing with demonstrators.

The unrest is expected to continue. Hong Kong’s Education Bureau suspended classes from Friday to Sunday, having called them off on Thursday, and advised parents to keep their children at home. Several universities have cancelled lectures for the rest of the semester or moved them online.

Police said Hong Kong’s annual gay pride parade would have to be a stationary rally. Other events such as the WTA Hong Kong Open, K-pop performances and an annual trail run hosted by Oxfam have been cancelled or postponed.

There were reports, including from China’s state-run newspaper Global Times, that a curfew would be implemented over the weekend. The Hong Kong government issued a statement saying such rumours were “totally unfounded”.

As tensions have ticked higher, Beijing has issued increasingly dire warnings. The state broadcaster CCTV called the protesters’ actions “naked terrorism”. It said: “What needs to be said has been said. There have been enough recommendations and warnings. The unrest must stop.”

Police have accused the Chinese University of Hong Kong of being a “manufacturing base for petrol bombs and a refuge for rioters and criminals” after some protesters fired burning arrows – taken from the university sports centre – at officers and threw 400 petrol bombs.

Police fired more than 1,500 rounds of teargas and more than 1,300 rubber bullets at the demonstrators. The city was paralysed, with much of its public transport suspended and all universities closed.

Mainland Chinese students have also fled the unrest, taking advantage of a programme that offers them a week of free accommodation in hotels and hostels in the neighbouring city of Shenzhen.

Chinese media reported that one hostel had received more than 80 applications for rooms by Wednesday morning.

The Beijing Evening News reported that protesters had broken into the dormitories of mainland students, spray-painting insults on walls and banging on doors.

Hong Kong police said on Wednesday that they had helped a group of mainland students leave their campus after it was barricaded by demonstrators.

The Taiwanese president, Tsai Ing-wen, called on Hong Kong’s government to cease “acts of repression,”, saying they threatened freedom and the rule of law.

Commenting on the police assault on students at the Chinese University of Hong Kong, Tsai tweeted that police in Taiwan used similar tactics during the years of martial law, which was lifted in 1987. She wrote: “Our dark past, which we have worked so hard to put behind us, has become the present reality for Hong Kong.”

China’s foreign ministry warned the US not to interfere with Hong Kong’s affairs, saying the city was part of China.

A ministry spokesman, Geng Shuang, said at a daily briefing on Wednesday that members of the US Congress should stop trying to promote bills on human rights or democracy in Hong Kong. “I want to reiterate that Hong Kong is China’s Hong Kong. Hong Kong affairs are purely China’s internal affairs and cannot be interfered by any external forces,” he said. 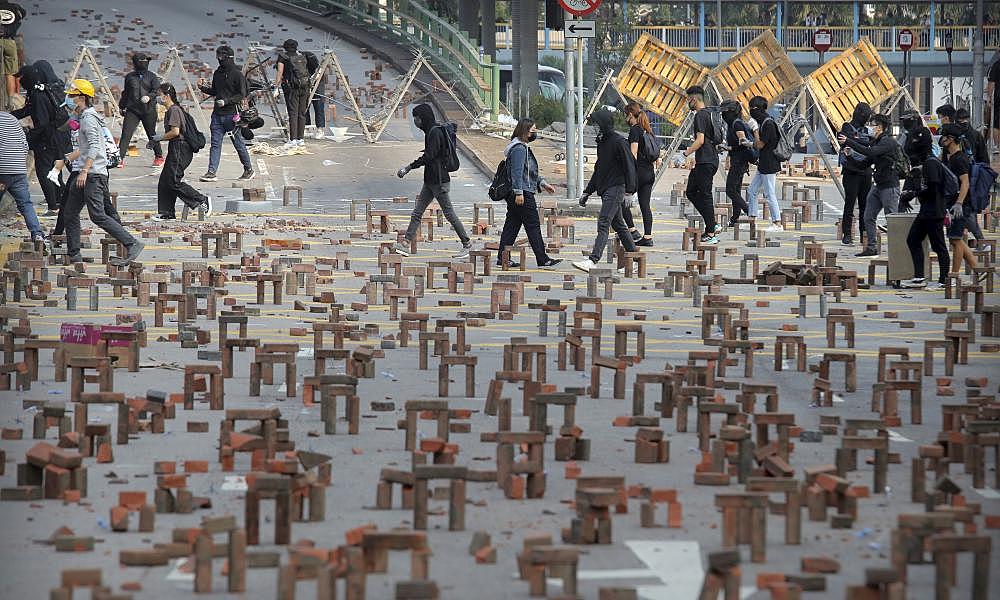 After being accused of assault on higher education, police say 'nowhere in Hong Kong is lawless land'