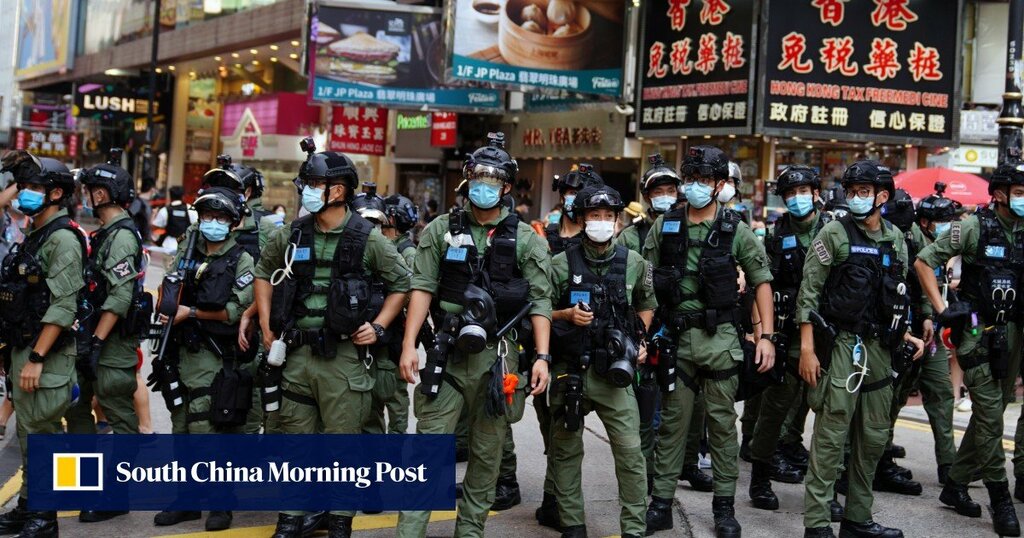 Hong Kong police are not taking any chances and plan to deploy at least 4,000 officers to ensure smooth and peaceful polls for the powerful Election Committee on Sunday even though only 4,900 voters are expected to cast their ballots, the Post has learned.

Mostly trained in riot control, the officers would be positioned at the five polling stations, the ballot-counting centre and high-risk locations, insiders said on Tuesday. Traffic police would also be mobilised to set up roadblocks if needed, they added.

Despite the small number of voters in the first election to be held under an electoral overhaul imposed by Beijing, authorities were deeply committed to ensuring the event would not be marred by any major incident, according to one force insider.

The central government undertook a drastic revamp of the electoral system in May to ensure only “patriots” could hold political power. In the first polls to be held under the new system kicking off this Sunday, there has been a record number of uncontested seats and nominations to the 1,500-strong Election Committee. Only 364 seats will be decided upon by 4,889 eligible voters.

Stressing it was not about size, an insider said: “It is a symbolic and important election. We will not treat it lightly.”

“It is the first polls after the 2019 district council elections and also the first of three coming elections in the city,” he said, referring to the contests for legislative seats in December and the chief executive race in March.

Echoing the same message, security minister Chris Tang Ping-keung said on Tuesday that Hong Kong must remain vigilant against terrorism and that law enforcement would ensure voting was not interrupted by any violence.

The extra manpower would mostly consist of officers who came from the 6,000-strong anti-riot squad set up at the height of the 2019 social unrest, according to the source. The squad was disbanded but the veterans can still be called for special duty.

The last time police significantly ramped up security was on July 1, when the city marked the anniversary of the handover from British to Chinese rule as well as the centenary of the founding of the Communist Party.

An extra 10,000 officers were deployed across the city, and only small pockets of mostly peaceful protests emerged. But the day ended in horror when a man stabbed an officer in the back in Causeway Bay. The assailant, described by authorities as a “lone wolf terrorist”, turned the knife on himself and was pronounced dead in hospital.

Protective vests were ready for all frontline officers on Sunday if necessary, according to one source.

Another insider said: “I don’t think there will be any trouble. Of course, police are prepared for every eventuality.”

He predicted that most people who might have been inclined in the past to take to the streets on key dates would be deterred this time round, given the arrests of pro-democracy figures and investigations into opposition groups by national security police.

The Post has learned the force was still gathering intelligence to assess the level of risk on Sunday and measures would be finalised as early as Thursday.

“The Security Bureau and its disciplined force will act resolutely to make sure it will be a safe sail and that the elections … will proceed in an orderly fashion,” Tang wrote on the bureau’s website.

Citing the July 1 stabbing, Tang reminded the public of the need to guard against a repeat attack and warned of possible terrorist activities such as those allegedly planned by the pro-independence group Return Valiant. At least 14 members of the group were arrested in connection with an alleged bomb plot.

“Police will step up intelligence gathering and scouring of the internet … [and] at the same time enhance interceptions to bar those carrying unlawful items from the election venue and public spaces,” he said.

Patrols at crowded spots and important places would also be increased, he said.

Former secretary for security Regina Ip Lau Suk-yee said she believed the deployment was to ensure the force erred on the side of caution.

“I guess it is a precautionary measure just in case there are untoward events and to protect some high-profile and controversial candidates,” the pro-establishment lawmaker said.

The Election Committee, which has been expanded by 300 seats, has been tasked by Beijing with not only selecting the chief executive but also nominating 40 candidates to the legislature, including its own members. Under the political shake-up, the Legislative Council has also grown from 70 to 90 seats.

But many committee seats have already been filled, and the remaining ones are in 13 of 40 subsectors representing different professions and trades. Members of the committee represent different segments of society.

Only 4,889 out of the 7,900 individual and corporate voters will be casting their ballots at five polling stations in Wan Chai, Tsim Sha Tsui, Sha Tin, Tsuen Wan and Tuen Mun on Sunday.

On Tuesday, Chief Secretary John Lee Ka-chiu, formerly the city’s security chief, visited the Registration and Electoral Office in Kowloon Bay to inspect and be briefed on arrangements and preparations for the polls.

Lee said the elections would have a profound impact on the future effective governance of Hong Kong.

“Improving the electoral system puts the principle of ‘patriots administering Hong Kong’ into practice and ensures the long-term prosperity and stability of the city, and is of great significance to the implementation of ‘one country, two systems’.”