Tegucigalpa (AFP) - Honduran ex-president Juan Orlando Hernandez, whose extradition is sought by the United States for alleged ties with drug traffickers, surrendered to police Tuesday after a judge ordered his arrest.

An AFP photographer witnessed the former leader being given a bulletproof vest and handcuffed by police as he exited his home in the capital Tegucigalpa to be brought before a judge.

Earlier Tuesday, the country's supreme court assigned a judge, whose name is being withheld for security reasons, to weigh the US request.

Hernandez had vowed to cooperate with domestic justice authorities, saying in an audio message on Twitter he was "ready to collaborate and to come voluntarily."

Hernandez said he would "confront this situation and defend myself."

On Monday, a Honduran official, who declined to be named, confirmed to AFP that Washington had asked for Hernandez to be extradited, as hundreds of special forces agents surrounded the ex-president's home.

Hernandez, a 53-year-old lawyer who left office last month after eight years and two terms in office, has been linked to drug trafficking operations by New York prosecutors.

His lawyer, Hermes Ramirez, said the police deployment to Hernandez's home constituted an "attack" on his rights as it had denied him access to his advisers.

Dozens of people with banners celebrated outside Hernandez's home, while in other cities, people took to the streets with loudspeakers singing "Juancho goes to New York," using his nickname

Though he portrayed himself as an ally of the US war on drugs, traffickers caught in the United States claimed to have paid bribes to the president's inner circle.

Alleged associate Geovanny Fuentes Ramirez was sentenced in the United States last week to life in prison and a fine of $151.7 million for smuggling tons of cocaine into the country -- with Hernandez's aid, according to prosecutors.

And in March 2021, Hernandez's brother, former Honduran congressman Tony Hernandez, was given life in prison in the United States for drug trafficking.

In that trial, a prosecutor said the then-president had received millions of dollars from drug traffickers for protection -- including from Mexican narco kingpin Joaquin "Chapo" Guzman.

Last week, US Secretary of State Antony Blinken said that "according to multiple, credible media reports," Hernandez "has engaged in significant corruption by committing or facilitating acts of corruption and narco-trafficking and using the proceeds of illicit activity to facilitate political campaigns."

Hernandez denies the claims, which he said were part of a revenge plot by traffickers that his government had captured or extradited to the United States.

Lawyer Ramirez insisted Monday that his client enjoyed immunity from prosecution as a member of the Guatemala-based Central American Parliament, Parlacen.

Hernandez joined Parlacen hours after leaving office on January 27, when leftist Xiomara Castro was sworn in with vows to transform the "bankrupt" state he left behind.

Several analysts said the Parlacen charter gives members, in their country of origin, the same immunity they would have enjoyed as members of their own parliament, which in Honduras, does not exist.

They also said that any immunity conferred by Parlacen membership could be waived at the request of a national government.

The US Department of Justice declined to comment on the extradition request.

During his term, Hernandez was accused of unjustly expanding presidential powers, including over the justice system and the country's election tribunal.

His re-election in 2017 was met with widespread protests against an alleged fraudulent campaign in the poverty- and violence-ridden country.

Attending Castro's swearing-in last month, US Vice President Kamala Harris was the first foreign official to have a bilateral meeting with her, and welcomed her commitment to combating corruption and impunity.

Castro has promised to undo laws passed under Hernandez that reduced penalties for drug trafficking and corruption. 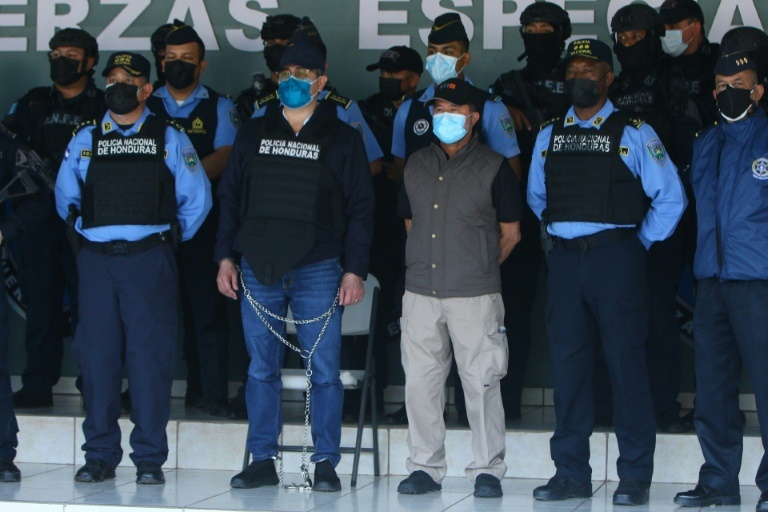 AFP
From analysis to the latest developments in health, read the most diverse news in one place.
Honduran ex-president in court as US seeks extradition

AFP
One place to find news on any topic, from hundreds of sites.
Honduran ex-president willing to surrender after police surround home