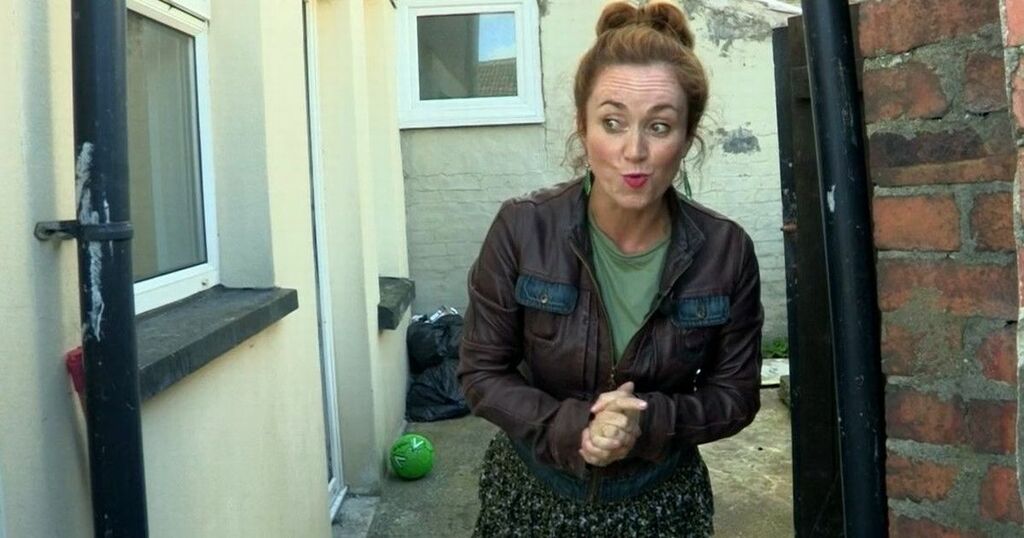 A Merthyr Tydfil property transformation on Homes Under The Hammer illustrated two issues that can confront a buyer at an auction - especially one new to the world of renovation.

When presenter Martel Maxwell visited this end of terrace, two-bed in the Valleys town with an open-plan kitchen and upstairs bathroom, it initially caused great excitement, especially in the garden.

But it wasn't the discovery of an outside loo that thrilled Martel, or the fact that the inside of the property was tired but not a wreck, but an extra plot of land.

The large side garden of this Merthyr abode was unexpected and most welcome as an option to extend the property and create much more internal space.

But was it the big bonus it first appeared to be?

This is where Martel's advice on Homes Under The Hammer was a warning to a potential newbie renovator - of course think about the work needed like replacing damp ceilings, but also think about ceiling price.

Auctioneer Paul Fosh who sold the property said: "It's always debatable whether the cost of the extension and doing the works will be reflected in the eventual sales price.

"And that's something that needs to be costed very carefully as this isn't an automatic one to extend I don't think, you really need to look at the figures very closely."

So ceiling prices in the area might not make it worth a new buyer's effort and budget spend, so hopefully the winning bidder of this auction lot was going to do their local house price and value research before splashing the cash.

If the property was to be a new owner's home rather than a money-making renovation project, and living space was of prime importance to the owner, then Martel thought the extra spend for extra space would probably be worth it.

The property went to the auction with a guide price of £50k to £60k, and was bought by Bev for £61,500, who has a very interesting past work history, including 20 years at a radio station and 10 years running her own Cardiff delicatessen called Deli-a-GoGo.

She was keen to have a go at swapping bread and cakes for bricks and mortar.

The main driving force for Bev was to see if she could steer her life away from the constraints of a nine-to-five job and have more work hour flexibility.

This Merthyr abode was her first journey into property development, and she was hoping to encourage as many members of the family to do as much work as possible to help to keep costs down.

But saying that, Bev's plans for the end-of-terrace were ambitious.

The list for the house update included a single-storey extension on the back, after knocking down the outhouse and loo, and some big glass doors on the side external wall to provide access into the garden, as well as a full makeover.

But that's a lot of change which was surely not going to leave her with any change from the £20k budget she had and could even leave her with no profit at all.

It was Bev's first property flip and she wanted to learn as much as possible to springboard her into another one, so the aim was to make some money but the amount was not the key driver of this home bought under the hammer development.

Bev had an estimated timescale of about two to three months, depending on planning.

But it took 17 months for the programme to return, so surely that was because of planning and there is now a bright, shiny, new kitchen extension at the rear of the house?

No. There's not an extension at all, as the sums just didn't add up with the ceiling price putting a lid on Bev's ambitions, so what has caused the timescale to slip?

The house has had a top to bottom makeover, including a new kitchen and bathroom, but the 17 months it took to revive this property was due to a hidden challenge and the lack of available local tradespeople.

The project was in jeopardy before all the makeover work even began and shows that a contingency budget is always needed, as so many houses are hiding a costly secret only revealed once you start pulling it apart.

Bev says: "We discovered that the only thing that was holding the house up was a large piece of wood, so we put a new beam in to basically hold the house up and stop it from falling down!"

Once the house was secure and not about to tumble down on anyone's head inside, the refurbishment could begin, but again Bev hit a snag - no-one wanted to work on the whole house.

Bev says: "When we started the project we were looking to employ people locally, because I thought if I was doing up a house here, then I should employ people here; fitting the kitchen and bathroom were fine, anything but other than that people didn't want to know."

But every cloud has a silver lining and that meant Bev had to get handy herself, learning how to use an electric saw and tiling the walls and floors herself.

Although now she is so good at tiling, there are requests from members of the family to come and do some tiling for them too.

Bev and her family have worked hard to spend the £20,000 budget where it could add the most value to the house, like the kitchen and the bathroom, and then they decorated and changed the flooring throughout.

Not much has changed in the garden, with the outhouse and loo now gone, but apart from a session with the mower, the garden remains the same.

Bev says: "We haven't really done very much to the garden, you've got to leave people who buy the house something to do, so I've left them the garden."

The interior design is in a neutral style that should appeal to everyone, another HUTH recommendation that has been repeated on the programme over the years, and allow the next occupant to just walk-in and start living.

Bev feels if she can renovate two properties a year it would give her the income to be released from the nine-to-five, but has her first foray into property flipping even made any money?

Bev has created a 'ready to go' product for someone to start enjoying immediately, with no work to do apart from adding their own style to the neutral decor, and if they fancy changing the tiles, maybe they can give her a call.

Homes Under The Hammer is on BBC 1 every weekday currently from 11.15am, with selected episodes also on BBC iPlayer. The episode that contained this story is currently available to view and is series 24 episode 36.