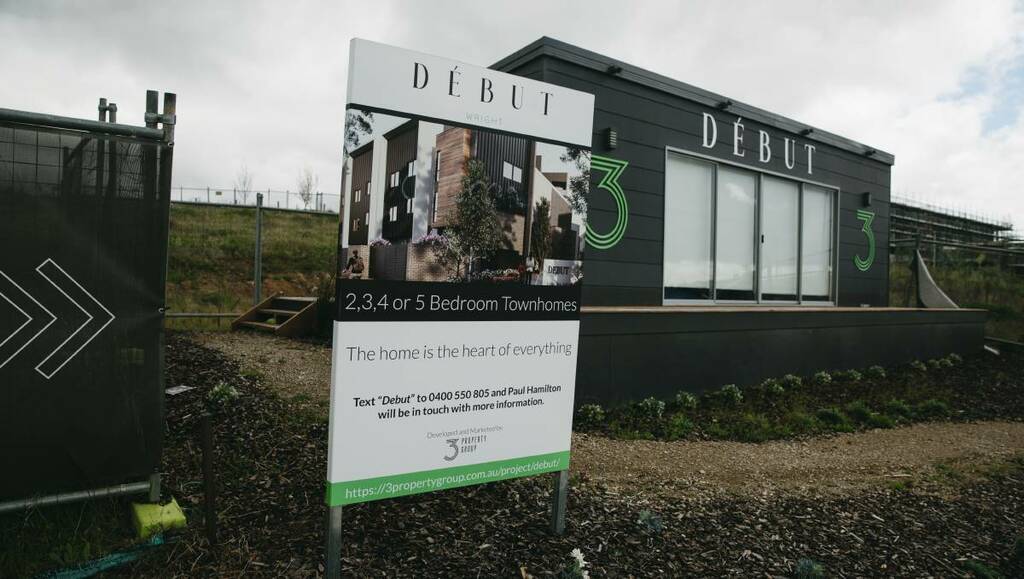 Off-the-plan buyers have slammed a Canberra developer for tearing up their townhouse contract before relisting the same property for $200,000 more than the initial sale price.

Canberra student and first homebuyer Brianna Eggleton fears she is now locked out of a booming Canberra property market after 3 Property Group cancelled their deal for a townhouse at the Debut development in Wright.

The home she had hoped to own has since reappeared on the market, but at a significantly higher price than Ms Eggleton had agreed to pay.

The ACT government is set to step in to prevent the same situation in the future, with Attorney-General Shane Rattenbury saying he wanted to address a potential "power imbalance" between developer and buyer.

Ms Eggleton signed her contract in May last year, but received a rescission notice last month.

"They cited two clauses, which was approval delays and building delays exceeding 90 days, which are in the contract," she said.

"Our only issue is that the approval delays happened in 2020, they could have rescinded then and they didn't.

"We can't prove that it's a money grab, but the timing is really suspicious," she said.

3 Property Group was contacted for this article but had not replied at the time of publishing.

A rescission clause, or sunset clause, is a common property contract term that allows buyers or sellers to exit a sales contract if certain requirements, such as development completion, are not met by a specified date.

Currently in the ACT, there are no laws in place to limit the seller's right to rescind off-the-plan contracts, leaving buyers at risk.

In NSW, similar laws were amended in 2015 after instances where sellers were terminating off-the-plan contracts to resell the properties at a higher price amid a growing market. Now, NSW developers must obtain either consent from the purchasers or a Supreme Court order to rescind a contract.

Mr Rattenbury said while sunset clauses were a means of mitigating risk for both parties, there were no penalties for developers who take advantage of the rules.

"There are currently no laws in the ACT which specifically prevent developers from rescinding contracts, and therefore, there are no penalties," he said.

"There is always the potential, as with all contracts, for people to take advantage of another party, and I am focused on mitigating that and ensuring there is no potential power imbalance between a developer and a buyer."

The attorney-general said he was aware 3 Property Group "has exercised its contractual rights to rescind off-the-plan property purchase contracts" in its Throsby, Wright and Coombs developments.

"However, I am concerned that the law currently allows the rescission of contracts which, while lawful, the community could consider to be unconscionable," he said.

"I don't think developers should be able to exit a contract, leaving the buyer inconvenienced and potentially out of pocket, solely because the developer determined they can make a greater profit elsewhere.

"I've asked my directorate to work on legislative reform options as a priority and to potentially mirror the NSW laws."

Buyers left empty-handed and priced out of the market

The attorney-general's focus on the issue comes in response to a number of buyers whose contracts have been rescinded by 3 Property Development, with reports dating back several years.

First homebuyer Canny Liu entered into a contract with 3 Property Group in October 2018 and paid a deposit for a three-bedroom townhouse, priced at $519,000, in the Allegro development in Throsby.

"At that time, my family and friends were all super happy for me, as I'm such a new immigrant and this [would] be my new home," she said.

However in October 2019, Ms Liu was given three options: pay $100,000 more to keep her original townhouse, take a smaller, two-bedroom townhouse for the same price or have her contract rescinded.

Ms Liu said this left her "no choice but to rescind" and was refunded her deposit.

Zhisong Qu and Cuiying He also signed a contract in 2018 with 3 Property Group, for a three-bedroom townhouse in the Vivace complex in Throsby.

After more than two years of waiting for their home Mr Qu and Ms He were told in April this year their contract was being rescinded due to approval delays.

The couple, and their new baby, said they were forced to continue renting while they searched for a home and were also unable to recover costs associated with the contract, such as fees paid to the Foreign Investment Review Board.

Caught out in a rising market

Ms Eggleton said she and her partner had been caught out in a rising property market in Canberra.

"It's quite concerning now because we'll look around the market and we can't afford anything close to what we had agreed to purchase," she said.

"So we're looking at an apartment rather than a house and [we will] see if we can get anything - I'm not sure if we will."