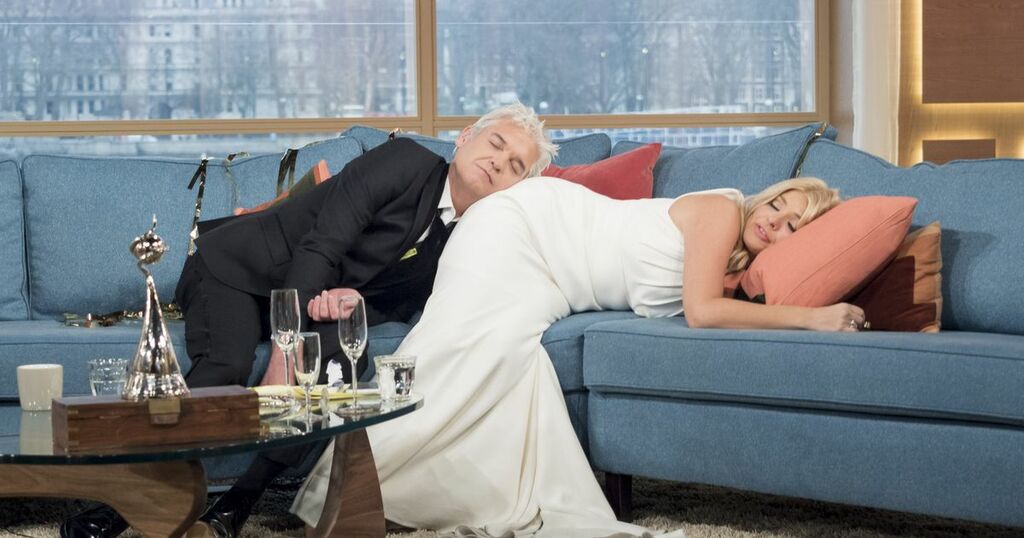 Since they first confessed to feeling a little worse for wear the morning after the National Television Awards in 2013, Holly Willoughby and Phillip Schofield's post-awards hangover episodes have become the stuff of daytime TV legend.

From turning up late on motorbikes to taking tactical naps on the This Morning sofa, Holly and Phil never fail to amuse viewers with their bleary-eyed antics.

Things will be a little different this year as the presenters don't work Fridays, meaning they'll finally be able to spend the morning after the glitzy bash at home with a fry up.

The ITV team will be out in force tonight with This Morning up for best daytime show and hosts Holly and Alison Hammond being nominated in the best presenter category.

Ahead of one of what promises to be one of the most starry and exciting nights in the TV calendar, we take a look back at Holly and Phil's most epic NTA hangovers...

The first time the iconic duo presented This Morning hungover was in 2013.

They were awarded the Most Popular Daytime Programme gong for the third consecutive year and decided to go big with their celebrations.

Giving viewers an honest insight into how they were feeling the next morning, Holly and Phil started the show by crawling out from behind the sofa.

Holly then asked Phil if they could present the show 'quietly' to help nurse her sore head.

The veteran presenter admitted he slept like a baby but his hangover was getting progressively worse as they headed to lunch time.

Despite feeling worst for wear, the hosts still managed to thank viewers for voting for them.

The party-loving duo failed to learn a lesson from their last escapades and went big following another win at the prestigious bash.

Viewers watched on a mused as the pair appeared to wake up in bunk beds, surrounded by streamers and balloons while Phil clutched a bottle of tequila.

After a slow start the pair soon got the giggles and had fans in hysterics as they battled to hold it together to present the morning show.

Holly and Phil skipped a year of hangovers in 2015 but certainly made up for it in 2016.

In iconic scenes the pair presented This Morning in the same designer evening wear they wore to the ceremony the night before.

They admitted they hadn't been to sleep and had come to the show straight from an NTA afterparty.

At one point Holly admitted she was trying to hide parts of her floorlength dress from the cameras, explaining: " "I'm covering up mint sauce on my dress, this is a lovely dress, but can you see the yellow stains? It's mustard and piccalilli, before you jump to any conclusions."

The pair then admitted they went to Ant McPartlin's house after the event, where they played Pie-Face the game.

This year the pair chose to use hair of the dog to cure their sore heads as Phil downed a glass of red wine live on air.

Holly went for a different approach as she felt so awful she retched twice whilst the cameras were rolling.

Despite, this the pair praised the episode as a triumph as they had been able to sort a change of clothes this year.

Thing went to a whole new level in 2018 when it appeared the hosts had failed to show up on time to the studios.

The crew uploaded a message to baffled viewers which said: "It seems we have a problem with studio eight. We’re trying our best to sort it out. In the meantime here’s some elevator music from Bradley Walsh.

"We’re sorry for the disruption. Our presenters haven’t turned up. We are working hard to fix the issue."

Phil eventually showed up but admitted he had lost his voice.

The sore heads continued with Phil giving up and climbing into bed with Holly during an on air segment.

The hosts arrived to work via motorbikes after winning the award for Best Daytime Show for the ninth year running in 2019..

Alison Hammond, stepped in to present the show as Holly and Phil burst into the studio on motorbikes.

Alison said: "We really appreciate you! Holly and Phil had the best time last night, I am not sure where they are, but don’t worry, I am here to take you through the show."

Holly then rode in on the bike and said: "We are here!"

Phil looked less enthusiastic, admitting he wanted to be sick in his helmet.

Last year saw the show scoop their tenth award in a row.

Holly and Phil made it clear that they weren't feeling their best but they soon cured this by downing Bloody Mary's live on air.

However, fans took to social media to talk about how fresh faced the pair looked despite a boozy night beforehand.