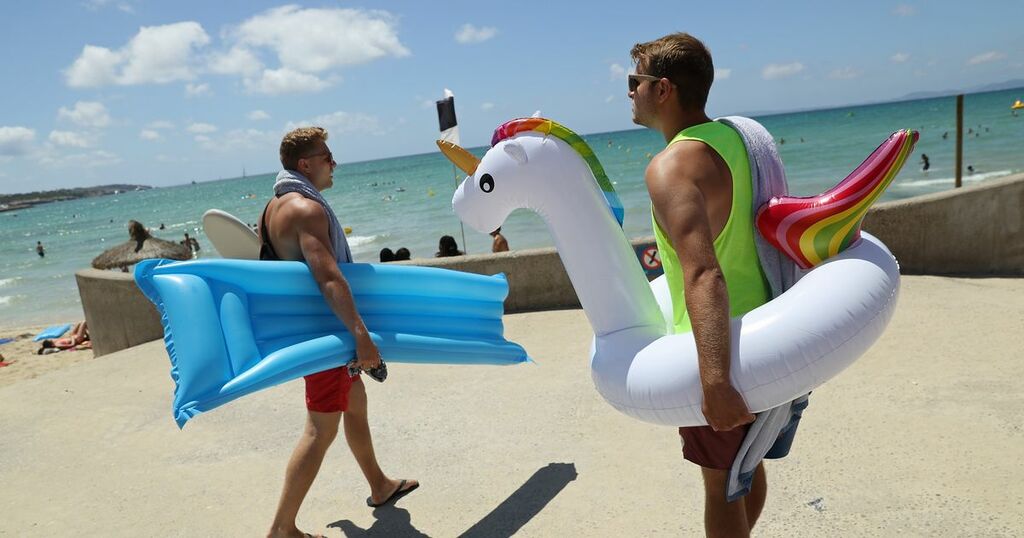 Six little-known Spanish laws - including fine for taking your shirt off
Tourists in Spain could be fined as much as £2,500 for public nudity.

A crackdown on anti-social behaviour has limited alcohol on some Spanish holidays.

Here is what to watch out for when you're on holiday

Holidaymakers could be fined for wearing bikinis and taking shirts off

Now that holidays are back on the cards, many Scottish holidaymakers will be getting ready to jet off to sunny Spain.

However for some, it will be the first get away since the pandemic began and it's worth brushing up on the local rules, just as much as entry requirements.

On top of covid rules, Spain has enforced a series of laws that might catch holidaymakers out with one regarding clothing.

To get away from the unpredictable weather in the UK, many gravitate towards the sandy coast of Spain to sunbathe, but if you don't follow the laws, you could be facing a hefty fine.

From keeping covered up to where you sleep Brits should be aware to avoid accumulating the fines which could reach a whopping £2,500.

Bikinis are only for the beach

For those heading out to the beach to catch some sunshine, be aware that you'll likely need to cover up your bikini.

Men walking around with their shirts off, or women wearing only bikinis or swimwear could be hit with £250 fines and these fines have reportedly already been dished out in Barcelona and Mallorca.

As UK Foreign Travel Advice states: "In some parts of Spain it’s against the law to be in the street wearing only a bikini or swimming shorts/trunks. Being bare-chested has also been banned in some areas of Spain. Some local councils will impose fines if you’re caught wearing swimwear on the seafront promenade or the adjacent streets."

It adds: "For security reasons, some public authorities in Spain don’t allow the burka or niqab to be worn in their buildings. If you visit town council buildings wearing a burka or niqab, you may be asked to remove it while inside."

In certain areas of the resorts of San Antonio, Magaluf and Playa de Palma there are prohibitions on happy hours, open bars (such as all you can drink in 1-hour offers), the sale of alcohol from vending machines, self-service alcohol dispensers and the organising of pub-crawls and party boat trips. The law also prohibits “off-licence” sales between 9:30pm and 8am in those areas and in Magaluf (Calvià) and Playa de Palma on the island of Mallorca, and San Antonio (San Antoni de Portmany) on the island of Ibiza.

Those on all inclusive holiday packages in those areas have a six drink limit - three with lunch and three with dinner.

No soap or shampoo

As Wales Online reports, at all Spanish beach showers, you can be fined up to £620 if you are caught using soap and shampoo to wash.

This is because the chemicals in these products are harmful to marine life and has been made illegal.

While it could be tempting to want to sleep under the stars on the beach, it illegal and in regions like Valencia can see Brits slapped with a massive £1,240 fine.

Camping on the beach is also against the law and could result in the same fee having to be paid.

If any Brits go nude on a non-nudist beach, they can expect a stern dressing down to go with a £620 fine.

But biggest fine holidaymakers can be hit with is in regards to beach barbecues.

While a bit of a grey area, any Brits hoping to hold one should seek permission beforehand because in some areas such as Salobrena, you can be handed a massive £2,500 fine.

After its success, the policy is being expanded and any Brits caught smoking at such a beach will be hit with a £25 fine.

The smoke-free beaches and zones include locations in Galicia, Murcia, Catalonia, Andalusia, Asturias, the Canary Islands and the Balearic Islands.

Six little-known Spanish laws - including fine for taking your shirt off
Tourists in Spain could be fined as much as £2,500 for public nudity.

A crackdown on anti-social behaviour has limited alcohol on some Spanish holidays.

Here is what to watch out for when you're on holiday