History awaits Djokovic – but first he must conquer nemesis Zverev 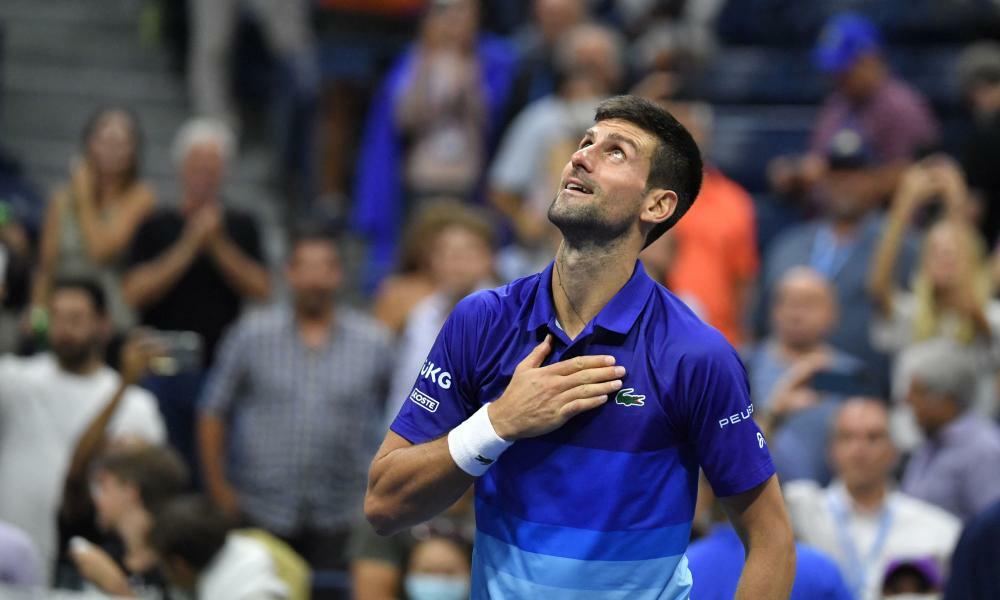 Two more matches. Six more sets. Those are the only remaining obstacles separating Novak Djokovic from becoming the first male player to win the calendar-year grand slam since Rod Laver in 1969 while also winning his 21st grand slam title, breaking his tie with Roger Federer and Rafael Nadal. But as he rounds on his final hurdles, standing before him are the most difficult tasks to come. On Friday he will face the surging Alexander Zverev in the semi-final, and if he wins possibly Daniil Medvedev, the second seed, in the final.

Over the course of the summer, Zverev, the fourth seed, has come to represent the biggest source of friction in Djokovic’s historic season. Just over a month ago, the Serb was seemingly powering towards his elusive Olympic gold medal and he led Zverev 6-1, 3-2 in the semi-final with a break of serve. But then, in a flash, it was gone. He lost 10 of the next 11 games and after starting the match with a 22-match winning streak, he lost three matches, two each in singles and one in mixed doubles, within 24 hours, as well as pulling out of the mixed doubles bronze-medal match. He left Tokyo exhausted. “I played great, great tennis. Then unfortunately [my] game fell apart. It happens,” he said on Wednesday about the loss against Zverev, after his four-set win over Matteo Berrettini.

But as Djokovic stands within two victories of further immortalising his achievements, the difference between Tokyo and the US Open is in the details. As in Melbourne and Paris, in New York he has endured moments of true discomfort, such as his fourth-round match against Jenson Brooksby, who refused to miss a ball for a set and a half. But maintaining such a high level for three full sets against Djokovic remains one of the ultimate challenges in the sport.

Djokovic has been taken to four sets in four matches at this tournament and he spent as much time on-court in the early rounds as ever before. But while some may be able to push him for a set or even possibly beat him at a lower best of three tournament, so far this year nobody has been able to play at the level required for long enough to win.

“I like to play best of five, especially against the younger guys,” said Djokovic. “I think the experience of being on the big stage so many times does help. Physically I feel as fit as anybody out there. So I can go the distance. Actually I like to go the distance. The longer the match goes, I feel like I don’t have any issues. I think I have a better chance than any other opponent. So that’s all.”

As Djokovic left Tokyo, licked his wounds and prepared to come again, Zverev used it as a springboard to the best run of his career so far. He won Olympic gold and he has since consolidated the biggest title of his career, winning Cincinnati and then reaching the semi-final here with just one set lost. More often than not he is hitting through his previously brittle forehand with confidence and intent. While his issues with his second serve are still present, they have significantly receded.

During this period, Zverev has received allegations of domestic violence from his former girlfriend, Olya Sharypova, including in an interview with Slate that was published before the tournament. Zverev denies the allegations.

While Zverev attempts to pull off the win of his life, on the other side of the draw Medvedev will face Canada’s Felix Auger-Aliassime. Auger-Aliassime, 21, was at one point widely considered the best talent of his generation yet his fast rise to the Top 20 has been accompanied by some growing pains. With two consecutive grand slam quarter-finals including his first semi-final in New York, however, he is maturing well.

Throughout his time in the tournament, particularly against Frances Tiafoe in their fourth-round match, he has paired his considerable weapons with a newfound relentlessness. He will try to employ it against an opponent who will look to draw out every last unforced error with his maddening defence and intelligence. For the victor, an even more difficult task likely awaits in the final.

Jamie Murray and Joe Salisbury guaranteed there will be a British winner in the men’s doubles at this year’s US Open after they both reached the final with their respective partners. Murray and Bruno Soares are into their first grand slam final since reuniting at the start of the year, with the 2016 victors of this competition edging out Australia’s John Peers and Slovakia’s Filip Polasek.

Under the roof of the Louis Armstrong Stadium, the seventh seeds Murray and Soares rebounded from a second-set blip to prevail 6-3, 3-6, 6-4 against their eighth-seeded opponents in one hour and 41 minutes and set up a showdown against Salisbury and his American partner Rajeev Ram.

The fourth-seeded pairing of Salisbury and Ram, who defeated Murray and Soares in the semi-finals of this year’s Australian Open, did not face a single break point and won their only one in a 7-6 (5), 6-4 victory over the American wild cards Steve Johnson and Sam Querrey in one hour and 18 minutes.