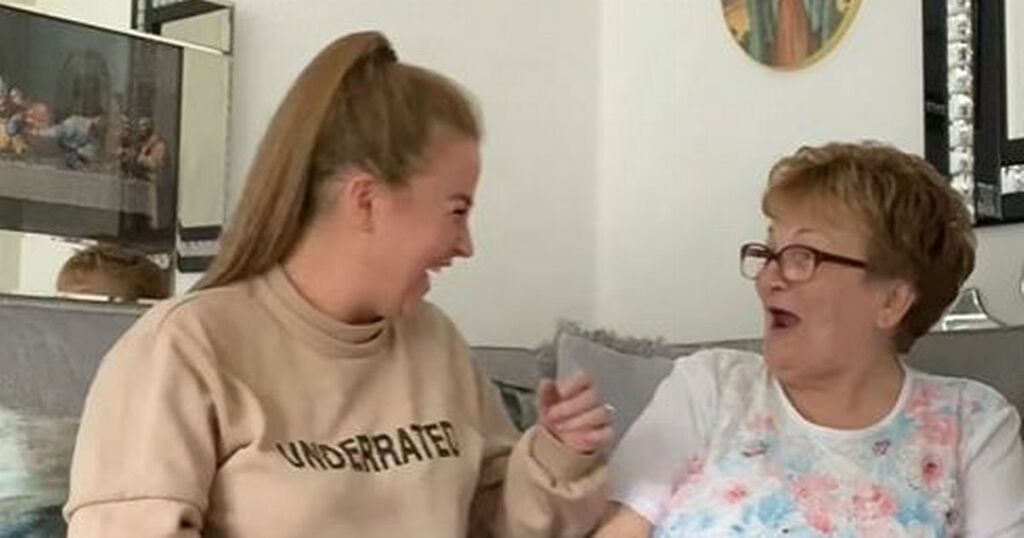 An hilarious video of a West Belfast woman winding up her granny has gone viral on social media.

26-year-old Caitlín Boyle posted the prank on Facebook on 74-year-old Bernadette which has now been viewed over 50,000 times.

In the latest trend, people are telling their loved ones they are filming a video to win prize money, before telling wacky lies on why they should win.

At the start of the prank, Caitlín says: "This is our entry into the £10,000 NHS competition, I think my granny deserves to win the money because she has done so much for our family over the years. She had six kids and her husband died whenever the kids were really young so she had to raise the kids on her own, she had to work two full time jobs just to be able to support them and put food and stuff on the table for them.

"And even back then, working two full time jobs wouldn't have been enough, so she would have sometimes had to go to like mass and stuff like that and whenever they were sending around the wee collection bucket, she would have actually had to steal money out of it."

This leaves granny Bernadette shocked and in hysterics of laughter, as she tells Caitlín, "Don't you dare!"

She adds: "I've never stole a thing in my life," before laughing even more.

"I can't believe you said that. I thought you were going to say I went to the chapel and got a bit of strength from it.

"It was bad at times, but Jesus not that bad that I was having to steal from collection boxes," Bernadette continued.

Caitlín proceeds to carry on the joke, adding that her grandmother got caught doing this after a while and was banned from mass, which Bernadette found even more hilarious and said "They were bad days."

The 26-year-old added: "Then my mummy and her sisters, she would have had to send them to the shop to like steal food and stuff," with the 74-year-old replying, "Where did I get you from?"

"They would have like stole the Trócaire box", Caitlín continued as more fits of laughter broke out as she added: "She gets really emotional about it, don't you granny, aren't you crying?"

The student nursed then added in 'the best of it all': "She stopped doing all that and just became straight and tried to make money the proper way.

"So obviously back then organ donation and all wasn't a big thing... people wouldn't have voluntarily done it so the NHS would have obviously paid people then...

"So my granny actually went forward to donate part of her liver... but because of her being an alcoholic... they wouldn't take it.

"She was an alcoholic and a thief, but she's came past it."

Caitlín added: "So obviously then she wasn't able to get any money for her liver, so she ended up, she donated one of her boobs."

The West Belfast woman told Belfast Live that this is a running joke in their house.

She said: "My granny used to worked as home help during the day, then worked in the Royal Maternity Hospital at night until she was diagnosed with breast cancer in 2000 and had to come out of work.

"I knew my friends and family would find it [the video] funny because granny Bernie is known to be very witty and is very popular amongst them."

Caitlín added how much of a bubbly character her granny really is.

"We knew she would be shocked about the chapel comments and didn’t think she would of found them as funny as she did, but she’s always up for a good laugh and doesn’t take herself too seriously.

"We are very close and I just love to go down and wind her up because you just don’t know what she is going to come out with."