High bed occupancy at Niloufer back in focus 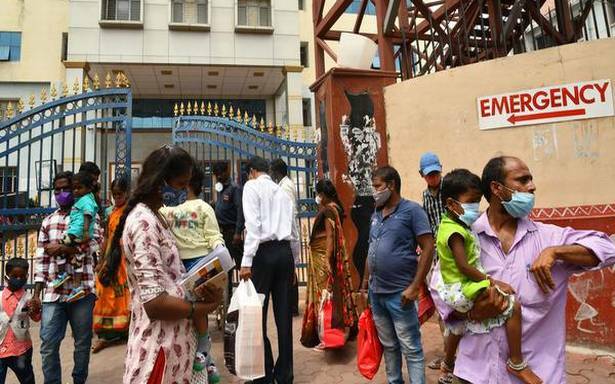 The high bed occupancy at Niloufer Hospital has come into focus again after AIMIM floor leader Akbaruddin Owaisi raised the issue during the ongoing Assembly session on Monday.

It was published in these columns in mid-September that the 1,400-bed hospital is nearing full capacity. The situation continues to be the same as nearly 90% of the beds (1,250 out of 1,400) were occupied on Monday. Doctors said 250 out of the 1,400 beds are dedicated to pregnant women.

“The remaining are paediatric beds (for children). It is not just dengue patients. Since Niloufer is a tertiary care hospital, children suffering from severe diseases and those in need of immediate medical attention are admitted here. Besides, parents opt for the health facility even if their children catch a flu. You will see a kid with viral fever right beside another kid suffering from a severe disease,” said a senior doctor.

Other doctors said the bed occupancy increases during monsoon given the rise in respiratory issues, seasonal diseases and viral fevers.

“The situation will ease in the coming days as the monsoon is set to end. Construction of a prefabricated structure on top of the old building has begun. Around 400 more beds will be added when the works are complete,” administrative officials at the hospital said.

Mr Owaisi has requested a visit to Niloufer Hospital and Fever Hospital in Nallakunta, which Minister T. Hairsh Rao agreed to. Senior officials from the Health department were directed to review the hospitals.

Doctors at Niloufer Hospital hoped the visits would help bring about an improvement in the health facility. “The old building of the hospital needs repairs. Hope it will be addressed,” said another doctor.

Fever Hospital superintendent K. Shankar said only around 100 of the 330 beds at the hospital are occupied. “The out-patient numbers are 800-1,000 a day, and around 500 of them have viral fevers. Regarding dengue admission, we admit the patients based on severity of the disease,” said Dr Shankar.