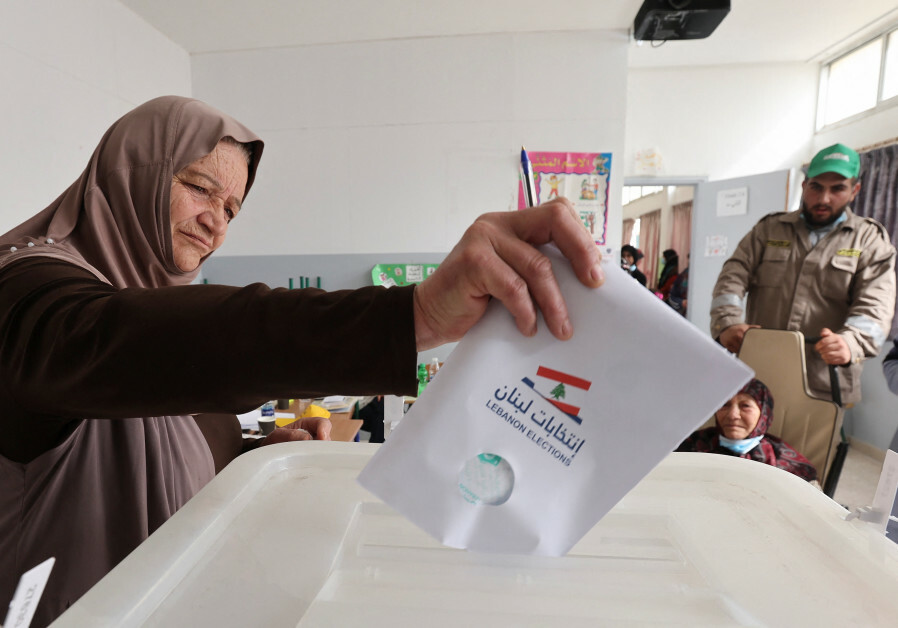 Elections in Lebanon: Hezbollah set to lose majority in parliament
Supporters of Hezbollah and the Christian Lebanese Forces clashed at polling stations across the crisis-ridden country.

The Independent UK
Lebanon elections: If Hezbollah feels it failed, will it react? - analysis

Partial results show change in the balance of power in parliament where Hezbollah and allies once held a majority.

Iran-backed Hezbollah and its allies are likely to lose their majority in Lebanon's parliament, three sources allied to the group…

Hezbollah weapons at the heart of Lebanon's elections Sunday

It was a sea of yellow as thousands of men, women and children waving Hezbollah flags and wearing the group’s trademark yellow caps rallied on a giant plot of land in the ancient eastern city of Baalbek in support of the heavily armed militant group.

One after another, many attendees vowed to vote Sunday for the Shiite Muslim Hezbollah and its allies in Lebanon’s closely watched parliamentary elections, rejecting any attempt to disarm the powerful group.

Despite a devastating economic collapse and multiple other crises gripping Lebanon — the culmination of decades of corruption and mismanagement — the deeply divisive issue of Hezbollah’s weapons has been at the center of the vote for a new 128-member parliament.

Disarming the group has dominated political campaigns among almost all of the group’s opponents. Those include Western-backed mainstream political groups and independents who played a role in nationwide protests since the start of the economic meltdown in October 2019.

“This is the biggest misinformation campaign. Why? Because they are implementing America’s policy against the resistance weapons,” senior Hezbollah official Hussein Haj Hassan told The Associated Press on Friday ahead of the rally in Baalbek.

Hezbollah was the only group officially allowed to keep its weapons after the 1975-90 civil war because it was fighting Israeli forces occupying parts of south Lebanon. In 2000, Israel withdrew from Lebanon but Hezbollah and others in the small Mediterranean nation insisted its weapons were necessary to defend it against Israel, which has one of the strongest armies in the region.

Hezbollah has since fought a monthlong war with Israel in 2006 that ended in a draw and after the start of the conflict in neighboring Syria the Iran-backed group sent thousands of fighters to fight alongside President Bashar Assad’s forces helping him tip the balance of power in his favor.

Hezbollah’s rivals say its weapons and its backing of regional forces such as Assad's and the Iran-backed Houthi rebels in Yemen have harmed Lebanon’s relations with oil-rich Persian Gulf nations. Those nations have categorized the Lebanese group as a terrorist organization and withheld crucial financial support for the country.

Haj Hassan, a legislator since 1996 and a Cabinet minister three times, said claims that Hezbollah is responsible for Lebanon’s collapse were “a big lie.”

“They forgot the political system, economic system, corruption, the war in Syria and its effects on Lebanon and they forgot the American sanctions,” he said at his home near Baalbek.

The bespectacled 62-year-old lost two brothers who fought for Hezbollah during Lebanon’s civil war and a nephew in Syria.

Hezbollah maintains its weapons are to defend Lebanon and not for internal use. But the group used them against rivals in May 2008 in the worst fighting at the time in many years. The Hezbollah offensive came after the government of then-Hezbollah opponent Fouad Saniora decided to dismantle the group’s military telecommunications network.

“No Lebanese group should have the right to be armed while other Lebanese are not,” said Samy Gemayel, head of the right-wing Kataeb party, in comments to the local LBC station Friday night.

The vote this year is the first after the economic collapse, described by the World Bank as one of the worst the world has witnessed in more than 150 years. It is also the first since the August 2020 blast at Beirut’s port that killed more than 200, injured thousands and caused largescale damage in the capital.

Three former Cabinet ministers allied with Hezbollah were charged in the port blast investigation but have refused to show up for questioning by the investigative judge. Hezbollah’s leader has blasted the judge and called for his replacement, and the investigation has been suspended for months following legal challenges by politicians.

Parliamentary elections are held once every four years and the last vote in 2018 gave a majority of seats to Hezbollah and its allies with 71 legislators.

As Lebanon sinks deeper into poverty, many Lebanese have been more openly critical of Hezbollah. They blame the group — along with the ruling class — for the devastating, multiple crises plaguing the country, including a dramatic currency crash and severe shortages in medicine and fuel.

Some expect its main Christian ally, the Free Patriotic Movement founded by President Michel Aoun, to lose seats. Others have expressed disappointment at Hezbollah’s unshakable alliance with Nabih Berri, Lebanon’s longtime parliament speaker seen by many as the godfather of Lebanon’s corrupt sectarian-based and elite-dominated political system.

Still, a win by Hezbollah is not in doubt. The group has a solid base and masterfully maneuvers its alliances and the electoral system. Intimidation ensures no Shiite threat emerges: Three Shiite candidates allied with the Saudi-backed Lebanese Forces group withdrew from the race in the Baalbek region within days.

In a Shiite village in southern Lebanon, residents were attacked last month as they headed to attend a rally for candidates running against Hezbollah. Weapons were fired in the air to disrupt a gathering by a Shiite cleric running against the Hezbollah-led alliance in Baalbek.

Hezbollah was blamed for intimidating the Shiite candidates, a claim Haj Hassan denied.

“They don’t want opposition within the (Shiite) sect. This is clear,” said Hilal Khashan, political science professor at the American University of Beirut. Khashan added that Hezbollah and its Shiite ally the Amal group of Berri are trying to maintain control of the 27 seats allocated for the sect.

Little change is expected from the election as mainstream political parties and politicians remain strong while opposition candidates are fractured. Still, Western-backed mainstream parties are hoping to strip the parliamentary majority from Hezbollah, while many independents are hoping to break through traditional party lists and candidates.

The vote comes after a powerful Sunni leader, former Prime Minister Saad Hariri, suspended his work in politics. Some have warned this may help Hezbollah’s Sunni allies to win more seats.

“I consider the ballot box as a line of defense for us,” said nurse Hoda Falah during the rally in Baalbek. Falah said Hezbollah’s weapons have defended eastern Lebanon from attacks by the Islamic State group and al-Qaida-linked militants over the years.

Top Hezbollah official Nabil Kaouk said in a speech last month that the elections will show that his group enjoys the most support in the small nation. He claimed that money flowing from Saudi Arabia, United Arab Emirates and the U.S. to their “tools” in Lebanon will not change results.

“May 15 will prove that the American project to target the resistance is sterile and they will only harvest disappointments,” Kaouk said.

Elections in Lebanon: Hezbollah set to lose majority in parliament
Supporters of Hezbollah and the Christian Lebanese Forces clashed at polling stations across the crisis-ridden country.

The Independent UK
Lebanon elections: If Hezbollah feels it failed, will it react? - analysis

Partial results show change in the balance of power in parliament where Hezbollah and allies once held a majority.

Iran-backed Hezbollah and its allies are likely to lose their majority in Lebanon's parliament, three sources allied to the group…