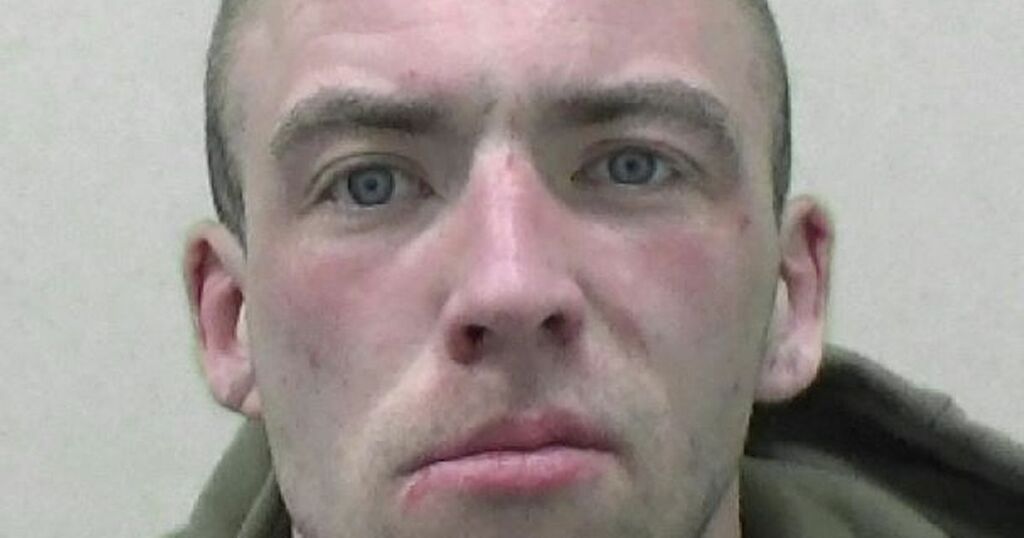 A violent thug who headbutted one police officer and kicked his colleague in the head has been jailed.

Officers were called out to a disturbance at Sam Brown's mother's home and found her upset, with furniture strewn about and upside down.

Brown was shouting and swearing and being aggressive so a decision was taken to arrest him.

But as he was being handcuffed, he pulled away then lunged at a PC, headbutting him in the face.

Brown was taken to the floor, where he continued to struggle and another officer arrived on the scene, in Hexham, Northumberland, to help.

Brown's brother then turned up, "appeared visibly irate", and was tasered.

One of the officers then felt a forceful blow to the left side of his head.

Matthew Hopkins, prosecuting, said: "The defendant had kicked him to the head, causing him to stumble back and experience pain."

Brown was eventually brought under control with the help of a third officer.

He warned "I'm going to f****** nut him again" then threatened to spit and gestured as if to do so.

Both of the injured officers required hospital treatment, with one suffering a soft tissue injury to his face and shoulder and grazed knees. The other had concussion, bruising, a deep cut to his shin and cuts and bruises to his legs.

One said he had been left "physically and emotionally hurt" and added: "It was totally unprovoked and unnecessary."

His colleague added: "He kicked me with considerable force to the left side of my head.

"It was an abhorrent and inexcusable and I'm disgusted by his actions."

Brown, 27, of Priestpopple, Hexham, who has 59 previous convictions, pleaded guilty to two counts of assaulting an emergency worker and was jailed for six months.

Richard Bloomfield, defending, said he had mental health problems and suggested a non-custodial sentence would help him address his underlying issues.