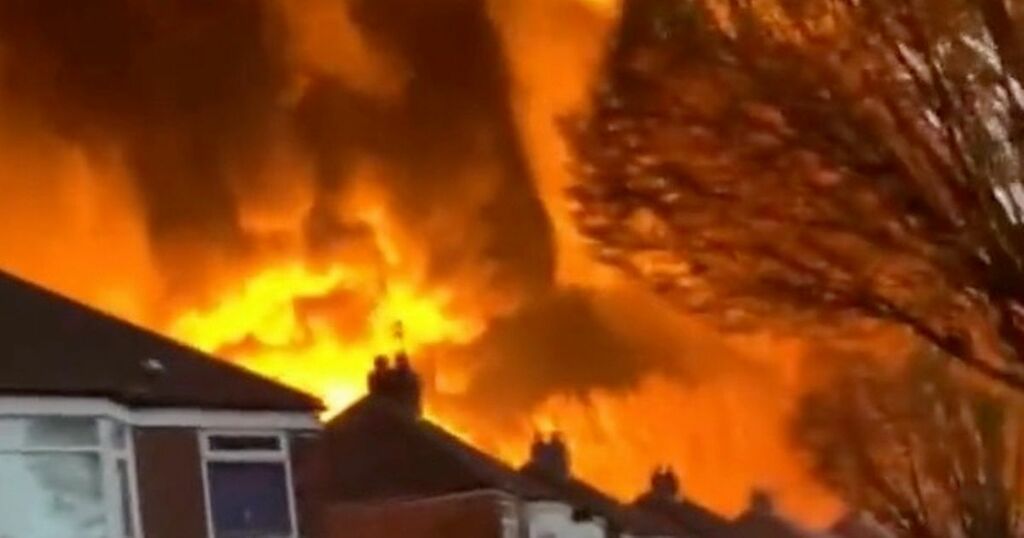 A fiery inferno has engulfed the sky in west Hull after a major blaze broke out at a plastics factory - with houses being evacuated by police.

The fire has ripped through Thompsons Plastics in Hessle from just before 4pm this afternoon with large plumes of black smoke and bright orange flames seen for miles around.

A total of 75 homes are without power and others have seen tap water turn brown.

Thankfully, firefighters have tonight confirmed that no-one was injured and all factory staff are accounted for and safe.

One man said he could hear the explosions "like bombs" coming from the fire and even had debris like "coal" landing in his garden.

And another said 'coal' is "falling from sky".

Have you witnessed this incident? Let us know at webnews@mirror.co.uk

The smoke has been spotted reaching the tops of homes, while some dramatic footage shows thick columns of fiery smoke raging above rooftops as crackling bangs go off.

Black smoke clouds appear to be "growing" near Humber Bridge with motorists advised to avoid the A63.

The fire service has warned people to close all doors and windows as crews battle to extinguish the flames.

Buses in the area are also having to divert.

In an update, Phil Leake, of Humberside Fire and Rescue said: "We want to thank members of the public for their patience.

"We got the call that a plastic factory in Saxon Way, Hessle was on fire at around 4pm on Wednesday.

"We currently have 14 fire engines down at the scene where I can confirm that thankfully there were no injures sustained.

"This was down to the work from the fire crews earlier on getting everyone to safety."

It is also understood multiple hospitality venues are shutting in Hessle Square, including pubs and shops.

One witness said: "I'm in Saxon Way in Hessle, people are now being been evacuated. Police and fire engines are at the scene too."

Another said: "I had just made a cup of tea while working from home when I heard a ferocious bang.

"I had no idea what it was an then saw there was a thick cloud of smoke across the city. This is frightening - stay safe everyone!"

A third added: "I saw it when it just started and then suddenly heard a big bang."

A spokesperson for the fire service previously said in an earlier statement: "We're currently in attendance at an incident in the Hessle area.

"We advise local residents to close windows and doors.

"Please avoid the Priory Way to A63 area and be mindful there is a large amount of smoke in the area and surrounding roads."

An East Yorshire Bus spokesman said: "Due to an ongoing incident on Hull Road, Service 57 is diverting via Anlaby Park Road South, Tilbury Road, Bethune Avenue and then via the Service 66 route into Hessle.

"This is in place in both directions."

MP for Hull West and Hessle, Emma Hardy tweeted: "I am hearing reports of a fire at the Thompsons plastics factory in Hessle.

"Please stay safe whilst the emergency services do everything they can to deal with this awful incident...."

"Thanks for your service. Hoping there are no casualties."