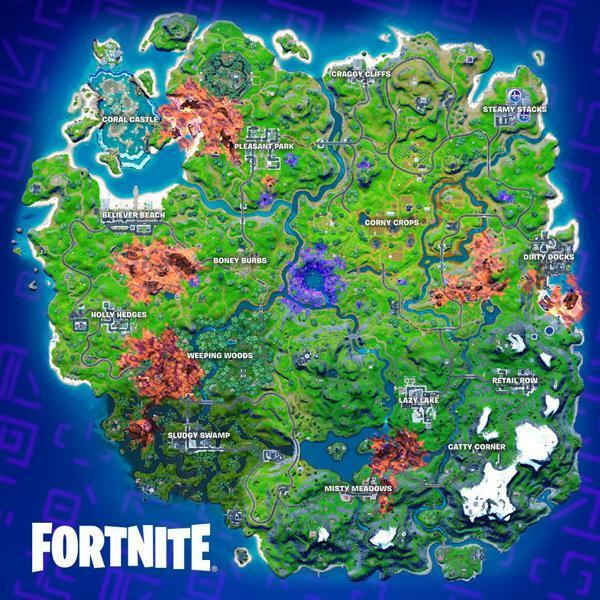 Fortnite Season 8 has arrived after the giant mothership crashed down to the island. Well, pieces of it, anyway, along with a number of Cubes.

This has resulted in a map not under siege in quite the same way as in Season 7, but rather there’s a lot damage done to it now. The full map is above, and if you want a larger view of it, you can click here.

The main things on the map now are threefold:

Past that, there are probably going to be a number of secrets still to be discovered on the map. Already in the early morning hours here, players have found another unbreakable bunker, one of Fortnite’s favorite old tricks, and who knows what might come of that.

Generally, speaking 90% of the map is probably the same as it used to be. There are five or so main crash sites, but most of the old big landmarks remains standing like Pleasant Park, Weeping Woods, Retail Row, Lazy Lake and others. It’s mostly the western half of the map that got hit the hardest.

The map overall is a bit less chaotic than it was when zones were constantly under assault by aliens, and unless I’m mistaken, I think IO has cleared out too, so we won’t have to deal with them anymore. Though we remember that Slone betrayed us, and I hope we get revenge before this season is over. As for what the grand Cube plan is going to be? I have no idea, but I’m guessing this conflict will escalate as the season goes on.