'Hell on earth': Manchester Airport passengers hit out at 'carnage' with long queues and 'four HOUR wait for luggage'

Passengers at Manchester Airport have reported facing long queues and baggage issues this morning amid 'absolute and complete chaos'.

Several travellers voiced their frustrations on social media, with one describing the situation as 'hell on earth'. Huge queues at check-in desks and security have been reported, as well as long waits for luggage in arrivals.

Martin Daniels tweeted a picture of a queue for check-in and said he didn't 'think he would make his flight'. Bryan Elwick also posted a video of a crowded check-in hall and said the queue 'was almost down to the railway station'.

At around 5.20am, Marion Wolstenholme tweeted: "Chaos @manairport this morning. Almost 2 hours queuing to drop of case & still no end in sight. Really really poor @easyJet. No organisation, no communication. Upset, anxious & frustrated queues of customers."

Ozzy Hamid described the situation as 'carnage' in a tweet posted at around 6am. He wrote: "Absolute carnage once again at @manairport. Security queues and no staff to help, flight leaves in 40 minutes."

Mhari Oakes said at around 6.15am: "Hell on earth this morning @manairport - avoid it like the plague!!! Everyone missing flights despite getting there 3 hours before departure. Absolute and complete chaos. No check in staff."

Kev Lowes tweeted a picture of a huge queue at around 6.30am and said: "@manairport 2 hours to get through bag drop and security at T2 ( and only because we were ushered through as it was final call for a 0650 flight ) Staff great.

"Organisation an absolute shambles and beyond a joke. Worst pre flight experience I have ever had."

Adam Thomas said he waited four hours for luggage to come through in arrivals. He tweeted pictures of passengers sitting on the floor as they waited this morning.

This follows weeks of issues for travellers at the airport caused by staff shortages. Bosses have said the hub is 'on the road to recovery', though passengers are still being asked to arrive three hours before their flight.

Last weekend, a spokesperson for the airport apologised to passengers facing long waits in baggage reclaim. "After a very damaging two years, our whole operation is facing resourcing challenges at present, including many of the third parties operating on our site, such as baggage handling agents", the statement said.

This morning, a Manchester Airport spokesperson said: "We apologise to any passengers whose experience at Manchester Airport this morning was not how they would like it to be. As we continue to recover from the pandemic, we continue to advise customers there may be some times when security queues are longer than usual, which is why we advise people to arrive three hours before their flights.

"On Tuesday morning, while the vast majority of people passed through security in under 30 minutes, waiting times peaked at around one hour in one of our terminals for a brief period of time, and we are sorry for any inconvenience caused. By 7am, security queues in all three terminals had improved significantly, and were as low as 15 minutes in the best case.

"We are also aware some passengers reported delays when checking in with their airline, and collecting baggage on their return. All parts of the aviation sector are experiencing challenges linked to the rapid recovery from the pandemic and we are working hard with all our partners, including handling agents, airlines and others to deliver the best possible service we can in the circumstances."

A spokesperson for Swissport, one of the baggage handlers at the airport said: "We are sorry for the delays passengers have experienced collecting their bags at Manchester Airport today. While the aviation industry is still recovering from the pandemic, we, like other ground handling services, are working hard to address these challenges and have already welcomed nearly 2,000 new colleagues across the UK and Ireland.

"We understand how frustrating and inconvenient delays are and we continue to work with our partners to implement contingency measures and improve turnaround times." 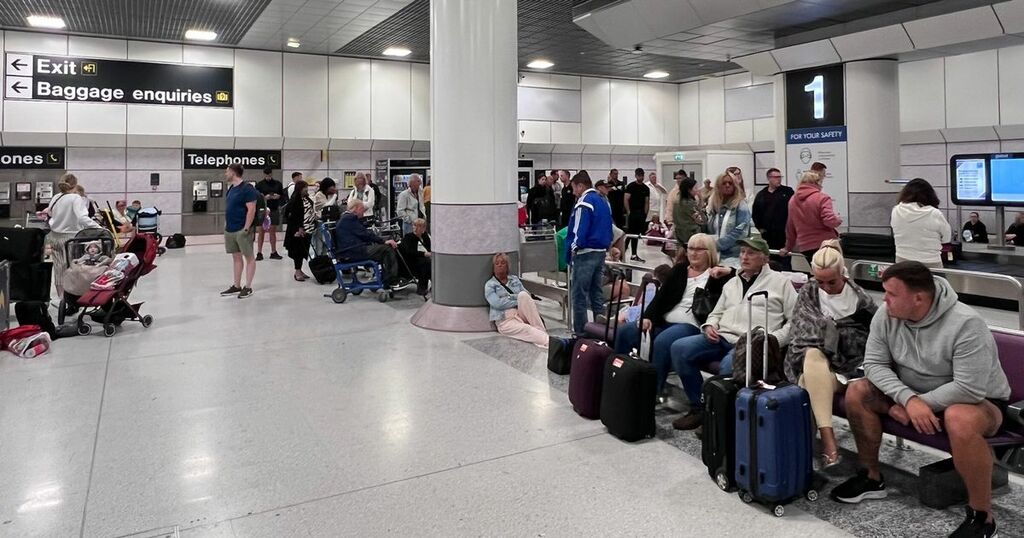