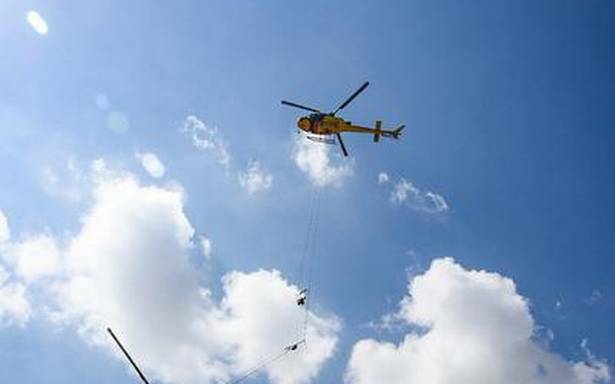 The ministers rolled out the initiative by flagging off a helicopter. Union Jal Shakti Minister Mr. Shekhawat had recently given sanction to the survey to develop a high resolution aquifer map to increase ground water resources in arid areas of north western Rajasthan, Gujarat, Haryana and Punjab.

The survey is the outcome of an agreement between the Central Groundwater Board, Jal Shakti Ministry and the National Geophysical Research Institute, Hyderabad.

"With this heli-borne survey, we would be able to cover larger areas to derive more accurate data. In some areas, this survey will also provide information about level, quantity, quality and information of ground water present as deep as 500 metres", said Mr. Shekhawat.

"Rajasthan also has the highest cattle population, which also requires more water. So there is a dire need of better water management here," he said.

The new technique, he said, would help in water conservation, identification of new places for ground water recharging and that too at lesser cost than the prevalent ones like digging tube wells using geophysics and remote sensing techniques, he added.

In his address, Jitendra Singh said there was hardly any scarcity of scientific capability but the techniques are not given the required importance.

"The findings of this survey will help in devising new schemes for improvement in water level in water scant areas," he said.

This survey will be carried out in two phases, of which the first phase comprises an area spanning 1 lakh sq km.