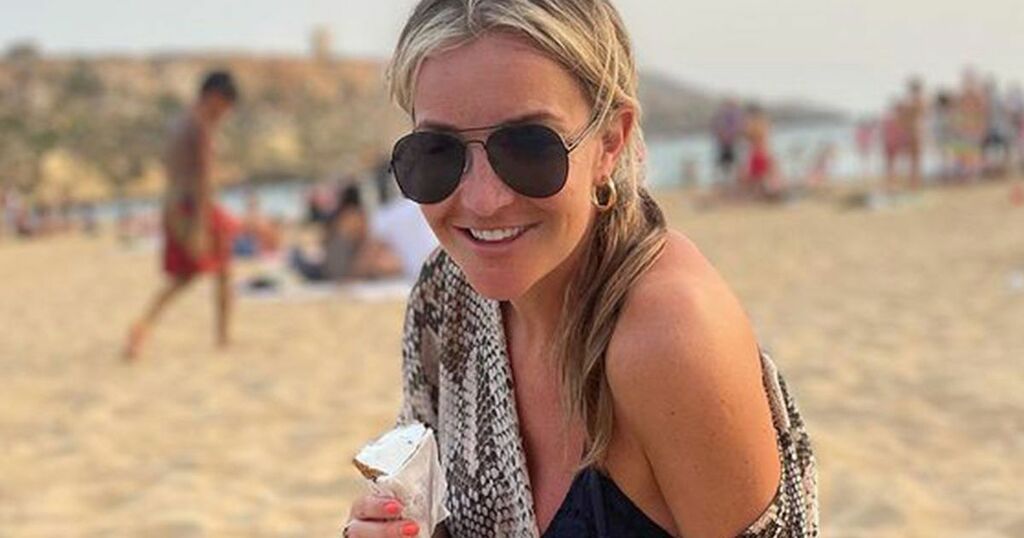 TV presenter Helen Skelton has confirmed she's pregnant with her third child by sharing a sweet snap of her growing bump.

She shared a picture of herself cradling her belly as she posed with her two sons.

The happy news was previously let slip after videos emerged on social media of her taking part in the BMW PGA Championship Celebrity Pro-Am on Wednesday.

Fellow competitor Inci Mehmet told that Helen was expecting when she uploaded a video of the sporty star swinging a golf club.

The professional sportswoman wrote: "An absolute god of a woman! @helenskelton learnt the game 6 months ago and now lighting it up at the @bmwpga Pro-Am whilst preggers!!!"

In photos captured at the event, the former Blue Peter presenter was seen in a navy dress.

The form-fitting style hugged her growing tummy and she continued her golf course look with white trainers.

The Holiday Hit Squad host shaded her head from the bright sunshine by sporting a visor and appeared determined to showcase her skills on the green.

Daredevil Helen is fond of a sporting challenge. She was the first woman to kayak the Amazon river solo and she has walked a tightrope across Battersea Power Station and completed a 78-mile ultra-marathon.

She was recently seen in C4's Celebrity SAS: Who Dares Wins. She managed to break the nose of fellow contestant Nikki Sanderson during a boxing match, and endured physical and emotional tasks to reach the finals.

The mum-to-be said that appearing on the series inspired her little boys to be more courageous, revealing: “I’ve shown [my kids] little bits of the show and they do love it. My little boy, ages ago, saw a girl on a rollercoaster and he said, ‘She’s brave like you, Mummy’.

Hollyoaks star Nikki has shown there's no hard feelings as was one of the first celebrities to congratulate Helen on her good news, writing on Instagram : "Love" and added five loveheart emojis.

Helen has yet to reveal her due date is and whether she has found out the sex of her baby. Let's just hope that this time round, the delivery of her third child is more peaceful and stress-free than when she had her second. Helen revealed the circumstances of giving birth alone in 2019, when she said, "I was in France and my husband was in England, and no one made it to me in time.

So I gave birth with just my three-year-old next to me, repeatedly hitting me on the head with a plastic sword, because he thought we were playing dinosaurs."

She described the experience as "terrifying" and added, "But I didn’t have a choice, I just had to get on with it."