Head over heels: why an Abba obsession is as Australian as Muriel’s Wedding 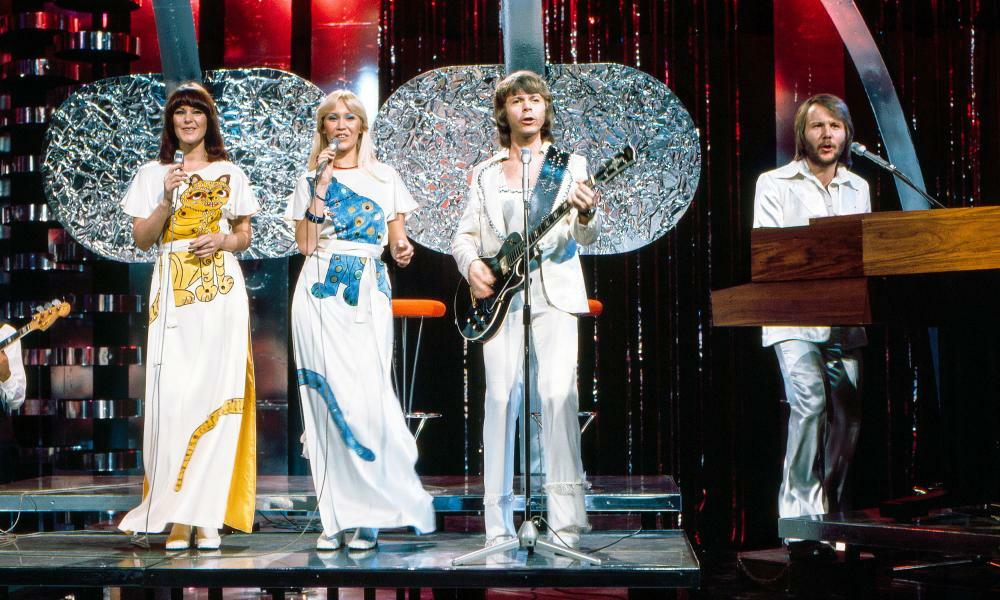 When Abba announced their first new album in 39 years last week, Benny Andersson said the band’s most memorable concert experience was their first Australian gig: in torrential rain in Sydney, in 1977. “It still sits in my mind. It was pouring down, there was mud all over the place, and 50,000 umbrellas. It was a wonderful sight.”

Australia’s feverish affection for Abba has long been a curiosity to other countries. Already, preorders for Abba’s upcoming album Voyage are selling out on the Australian site, but our national devotion to these flamboyant Swedes has been going strong for some 46 years.

I was five years old when I first heard the euphoric opening bars of Dancing Queen. From that moment, I was captivated.

I coveted my mum’s Abba Gold CD, poring over the liner notes which to this day remain dog-eared and covered in sticky, yoghurty fingerprints. My best friend, Lucy, also fell hard and it was perhaps a peculiar sight for two five-year-olds in 1992 to be roleplaying “Abba” in the playground and competing over who got to be our favourite member, Anni-Frid (it was always Lucy because she was a brunette and I was blond). We’d even coerce our younger siblings into playing the parts of Benny and Björn, orders with which they would begrudgingly comply.

Twenty-nine years on, my unabashed infatuation with Abba has yet to subside and last week’s announcement marked a day I never thought would come.

After achieving moderate success in European countries, Australia catapulted Abba to stardom way back in 1975 after the music video for I Do, I Do, I Do, I Do, I Do aired on Countdown. From there, Abba held the No 1 spot on the charts for 39 weeks during 1976 with Fernando spending a whopping 14 weeks at No 1 in Australia. Countdown host Molly Meldrum famously made a decision after 12 weeks not to show the music video, resulting in furious Abba fans causing a switchboard meltdown at the ABC. The video was reinstated for the remainder of its No 1 position.

Even as a five-year-old, the music videos were a key part of my fascination with Abba. Rainy days were spent obsessively watching and rewinding a VHS compilation of clips, always fast-forwarding the 80s ballad, One of Us, because the theme of divorce and break-ups was a) rather too complex for my five-year-old brain and b) just seemed decidedly boring as Agnetha repainted an apartment in the video (present day me now considers this their best work).

A 1976, an Abba-in-Australia TV special got more views than the 1969 moon landing. The Best of Abba was screened four times to record-breaking ratings.

Abba-mania reached fever pitch during the 1977 tour – their only concert tour of Australia and, with an entourage of 106, the biggest tour ever attempted in the country at the time. Fans and media besieged the Swedes from the moment they got off the plane, climbing barricades, cyclone fences and throwing themselves in front of their cars. In his book Bright Lights, Dark Shadows, Abba historian Carl Magnus Palm quotes tour manager Thomas Johansson: “A mother ran up and put a baby down on the highway so that [the] caravan of cars would stop – only to get an autograph. That was to the extreme, but that sums up how mad and totally crazy the whole thing was.” According to the same book, the manager of a hotel Abba slept at in Melbourne cut up their bed sheets after they left, and distributed squares of it through the Sunday Observer.

In her autobiography, As I Am: Abba Before & Beyond, Agnetha recalls the mayhem that had consumed Australian fans. “There was fever, there was hysteria, there were ovations, there were sweaty, obsessed crowds. Sometimes it was awful. I felt as if they would get hold of me and I’d never get away again.”

The 1992 release of Abba Gold saw the Abba revival gain momentum, but it wasn’t until 1994, when both Muriel’s Wedding and The Adventures of Priscilla, Queen of the Desert made their debut on screens, that our obsession reignited.

Muriel’s Wedding, the story of a social outcast and Abba fan, tapped into the national psyche and spawned a catalogue of new catchphrases including Muriel’s quip: “Now my life’s as good as an Abba song. It’s as good as Dancing Queen.” Australians collectively embraced our past as Abba superfans and Abba became woven into our national identity.

When ABBAWORLD, an interactive museum exhibition, toured Australia, emblazoned on the entrance wall was: “There is nothing more Australian than an unhealthy relationship with Abba.”

Each May, thousands of people descend on the small town of Trundle, in regional New South Wales, for Australia’s only festival dedicated to the Swedish supergroup.

Australian fans who have been fortunate to nab tickets to one of the virtual concerts, performed by Abba-tars and held in a purpose-built arena in London, are all holding their breath, unsure whether international travel restrictions will allow them to make the pilgrimage next year.

But for five-year-old me, and for the many of us in Australia who woke at 2.45am last Friday for the global announcement, the news of a brand new album has simply brought a surreal comfort during uncertain times.