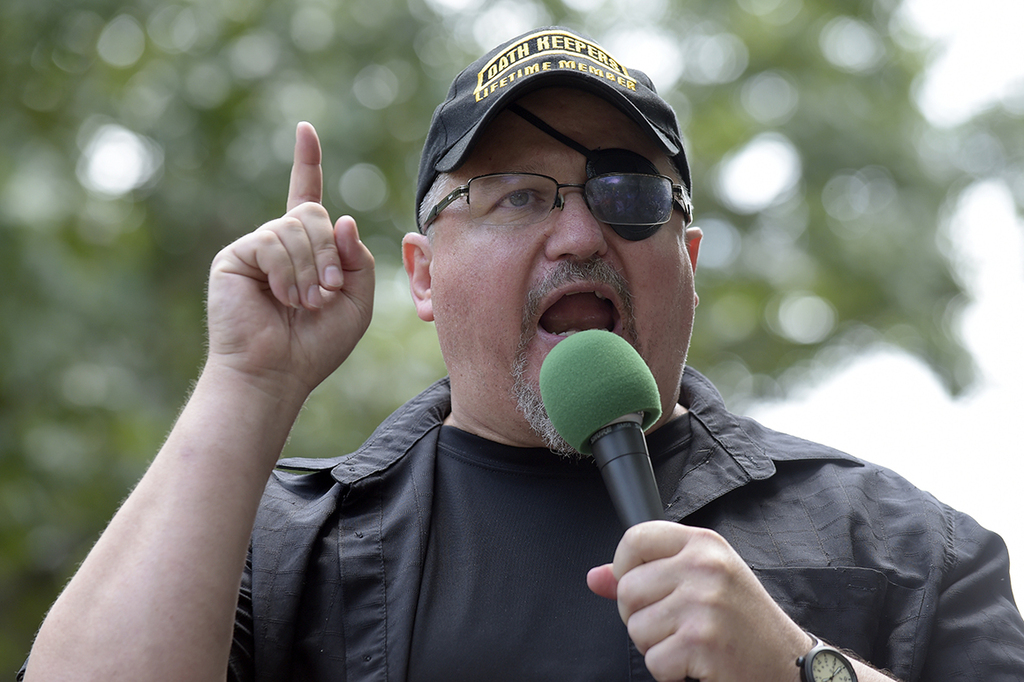 The Justice Department has leveled its most serious charges yet stemming from the Jan. 6 Capitol riot, accusing the national leader of the far-right Oath Keepers militia and 10 others of seditious conspiracy by plotting to use force to block the peaceful transfer of presidential power a year ago.

Among those charged for the first time in one new grand jury indictment is Stewart Rhodes, a disbarred attorney alleged to have coordinated the attack on the Capitol who has long been of significant interest to federal prosecutors probing the insurrection by Donald Trump supporters.

Rhodes was arrested in Texas Thursday morning, the Justice Department said. The 48-page indictment begins with a description of a "plot to oppose by force the 2020 lawful transfer of presidential power."

"The purpose of the conspiracy was to oppose the lawful transfer of presidential power by force, by preventing, hindering or delaying by force the execution of the laws governing the transfer of power, including the Twelfth and Twentieth Amendments to the Constitution," the indictment reads. Among the goals of the conspiracy, prosecutors say, was "breaching and attempting to take control of the Capitol."

Prosecutors have spent months building a case against Rhodes, describing with great detail his movements even as they delayed charging him alongside 19 other Oath Keepers previously indicted for breaching the Capitol.

Rhodes was present outside the Capitol on Jan. 6, 2021, and there has been no public indication he entered the building. As the violent assault was underway, Rhodes was captured on video assembling his allies at a rally point outside the Capitol complex. Many of those who can be seen conversing with Rhodes were charged early last year as part of a sweeping conspiracy to halt Congress’ certification of the 2020 election.

The decision to level seditious conspiracy charges is the most significant public step the Justice Department has taken to date in its insurrection probe. Just six days after the riot, the top prosecutor handling the investigation said such charges were being considered.

“We are looking at significant felony cases tied to sedition and conspiracy,” then-acting U.S. Attorney Michael Sherwin said at a televised news conference.

However, prosecutors held off for almost exactly a year on following through on Sherwin’s words. Until a set of new indictments were handed down by a grand jury in Washington Wednesday, the highest-level charges facing defendants were obstruction and police assault.

The nature of the charges themselves cast the Jan. 6 in a far more menacing light. Seditious conspiracy charges are extremely rare. The most recent before the new charges facing the Oath Keepers came in 2010 against nine militia members who plotted a violent assault on federal authorities.

Allies of former President Donald Trump, inside and outside of Congress, have pointed to the absence of sedition charges as evidence the Capitol riot is overhyped while attempting to downplay the violence of the attack.

Among the key elements of the plot, prosecutors say, was the establishment of a “quick reaction force“ — a stockpile of firearms and other weaponry — outside of Washington D.C. that could be called in to escalate the attack.

Jonathon Moseley, an attorney who was representing Rhodes in negotiations with the Jan. 6 select committee, said he was on the phone with Rhodes discussing his strategy for the panel when the FBI arrived at Rhodes’ home and told him to come outside. Moseley said Rhodes conferenced him in on a phone call with the FBI special agent in charge.

“They called him on the phone and they asked him to come out and put his hands up to be arrested. And so obviously the first order of business with that is to make sure there’s no misunderstanding, no problem with that,” Moseley said. “They wanted to know who else was in the house.”

Moseley said he’s working to get Rhodes a criminal defense attorney who can represent him at a bail hearing. The House's Jan. 6 select committee had subpoenaed Rhodes as part of its investigation into the attack. Moseley has previously said Rhodes was likely to plead the Fifth to the panel. A spokesperson for the select committee did not immediately respond to a request for comment.

Defense attorneys for already charged Oath Keepers have complained for months that the numerous anonymous references to Rhodes as an uncharged “Person One” in succeeding indictments over the riot had unduly complicated the case as trials loomed. Those attorneys also have warned that belatedly charging could roil plans for the trials.

Prosecutors often laid out in painstaking detail the communications Rhodes had with other members of the charged conspiracy, detailing the length of his phone calls and the content of private messages with other group members. He was typically referred to only as “Person One” in the charging documents.

Rhodes was a vocal agitator in support of Trump’s effort to overturn the election in 2020. He repeatedly and publicly warned of violence if Biden’s election were affirmed. He rallied allies in the Oath Keepers to descend on Washington and encouraged Trump to invoke the Insurrection Act in an attempt to prevent Congress from sealing President Joe Biden's victory.

On Jan. 6, 2021, his group stored weapons at a Comfort Inn in Virginia near the Capitol as part of their “quick reaction force,” federal prosecutors have alleged.

Among the men charged with seditious conspiracy are at least two photographed with Trump ally Roger Stone on Jan. 5, 2021 — Roberto Minuta and Joshua James. Stone, who has been subpoenaed by the Jan. 6 select committee, has not been accused of any wrongdoing and has disavowed any knowledge of the Oath Keepers’ intent to go to the Capitol.

Stone asserted his Fifth Amendment rights to decline to provide testimony to the select committee.