Have faith in the Gandhis, says Navjot Singh Sidhu after meeting Harish Rawat and K.C. Venugopal 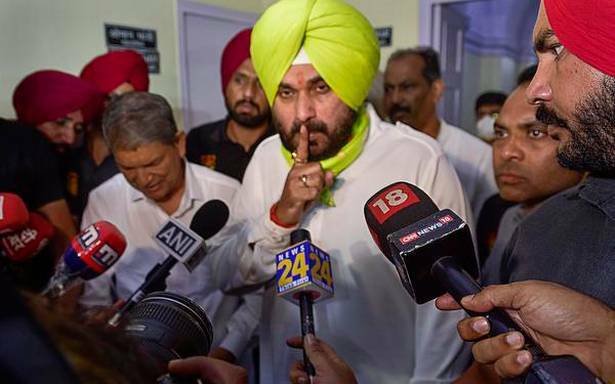 Signalling his intention to continue as the president of the Punjab Pradesh Congress Committee (PPCC), Navjot Singh Sidhu on Thursday said he had full faith in the leadership of Congress president Sonia Gandhi as well as former party chief Rahul Gandhi and general secretary Priyanka Gandhi Vadra.

He made these remarks after meeting All India Congress Committee's (AICC) Punjab in-charge, Harish Rawat and general secretary (organization) K.C. Venugopal, at the AICC headquarters in New Delhi.

Mr. Rawat too made it clear that the cricketer-turned-politician will continue as the PPCC chief but the party organisation in the State will be reorganized.

A formal announcement to this effect will be made by Friday, he said.

It was his first meeting between Mr. Sidhu and the party's central leadership after he sprang a surprise on September 28 by posting his resignation on Twitter to protest against certain appointments by newly-appointed Punjab Chief Minister Charanjit Singh Channi.

"I have conveyed the concerns I had regarding Punjab and Punjab Congress to the high command," Mr. Sidhu said after an hour-long meeting with Mr. Rawat and Mr. Venugopal.

“I have full faith in the Congress president, Priyanka ji and Rahul ji. I am sure whatever decision they take, it will be in favour of Punjab and State Congress. I have always considered them to be topmost and will always follow their orders,” he added.

The Congress wants to finalise the party organisation in the State soon and is learnt to have discussed the same with Mr. Sidhu.

“Tomorrow, the whole situation will be clear to you. The instructions bare that he should function as the State Congress president and strengthen the organisation,"Mr. Rawat told reporters.

Asked about Mr. Sidhu’s differences with the Punjab Chief Minister, AICC's Punjab in-charge said, "Navjot Singh Sidhu and Charanjit Channi have spoken on some issues, a solution will emerge...there are some things that take time."

Embarrassed by Mr. Sidhu's unpredictable moves, sources said, the high command wanted to make it clear that the Punjab Congress chief should "mend" his style of functioning.

And in a clear message to Mr. Sidhu, the newly appointed Punjab Chief Minister was asked to accompany Mr. Gandhi and Ms. Vadra when they visited the families of the victims of the Lakhimpur Kheri incident.