Harvey Elliott's inspiring words to injured Liverpool fan, 13, in hospital beside him 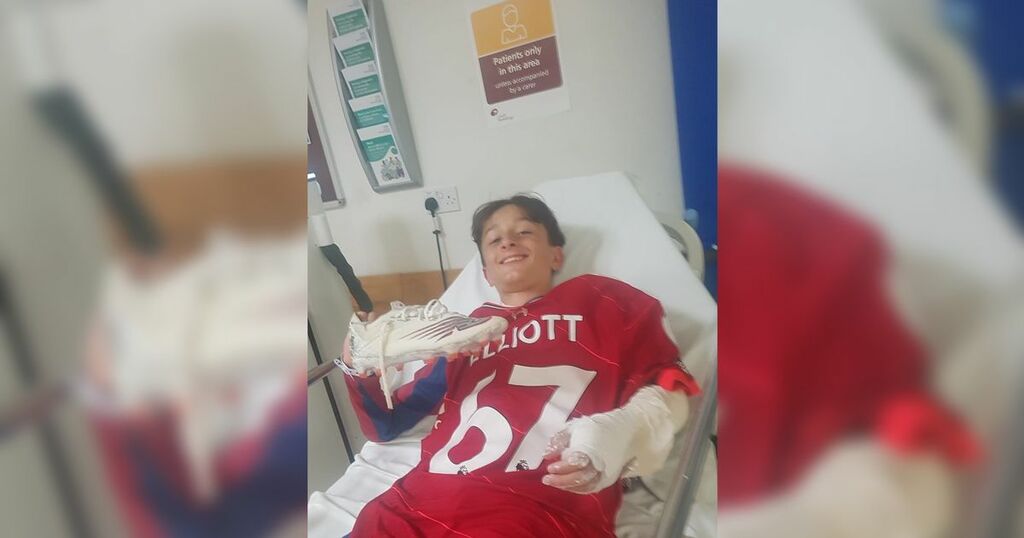 Injured Harvey Elliott shared an inspiring message with a young Liverpool fan who ended up in the hospital bed beside him on Sunday.

After both suffering injuries while playing, the 18-year-old LFC midfielder and 13-year-old player were placed alongside eachother while being assessed.

Jacob from Leeds fell and broke his arm after a tackle while playing for North East Leeds Under 14s Pumas on Sunday, September 12.

He was taken to A&E at the Leeds General Infirmary by his mum before having an X-ray to look more at the damage.

READ MORE: Pub famous for its giant pork pies being forced to remove them from menu

But in the X-ray room, Jacob was left 'shocked' and 'surprised' when he looked to his left to see Liverpool's Harvey Elliott next to him.

Jacob's dad, Imran said: "Jacob wasn't the one to start the conversation, Harvey Elliott was asking him about his football, how he got his injury and everything.

"He was so brilliant and lovely with my son and was giving him advice on football, how to handle himself and everything.

"He could have easily not wanted to talk to anybody after his injury but he went out of his way to chat to Jacob and really lifted his spirits."

Elliott was stretchered off of the pitch after suffering a horrible injury on his ankle during the Reds’ 3-0 victory over Leeds United.

In the second half, Elliott was chopped down by Pascal Struijk and taken to Leeds General Infirmary for immediate treatment for a dislocated left ankle. He now awaits surgery.

After Elliott asked Jacob who he supported and found out he was a Liverpool fan, the 18-year-old prospect gave Jacob his kit and also one of his football boots.

Imran told The ECHO : "Harvey gave him his kit without him even asking, it was such a kind gesture.

"He took his top off while lying in the bed and also gave him his right football boot.

"He was telling Jacob how sorry he was he couldn't give him the other one but that he was going to keep it as it was his lucky boot.

"I can't thank him enough for how lovely and genuine he was to my son, I just want everybody to know how humble he was.

"Lots of people would be quick to think he might be a primadonna but he just wasn't. We also met his family who were just as lovely."

The 13-year-old said there was one thing Harvey said to him while they were in hospital that he would never forget.

Jacob said: "He said to me that we were going to get through our injuries together and made me feel much better, as I wasn't feeling great in hospital. I was just shocked.

"When I get back to football after my injury I'm going to train even harder."

Jacob is now at home with a cast and will not be able to play football for a few weeks due to his break.