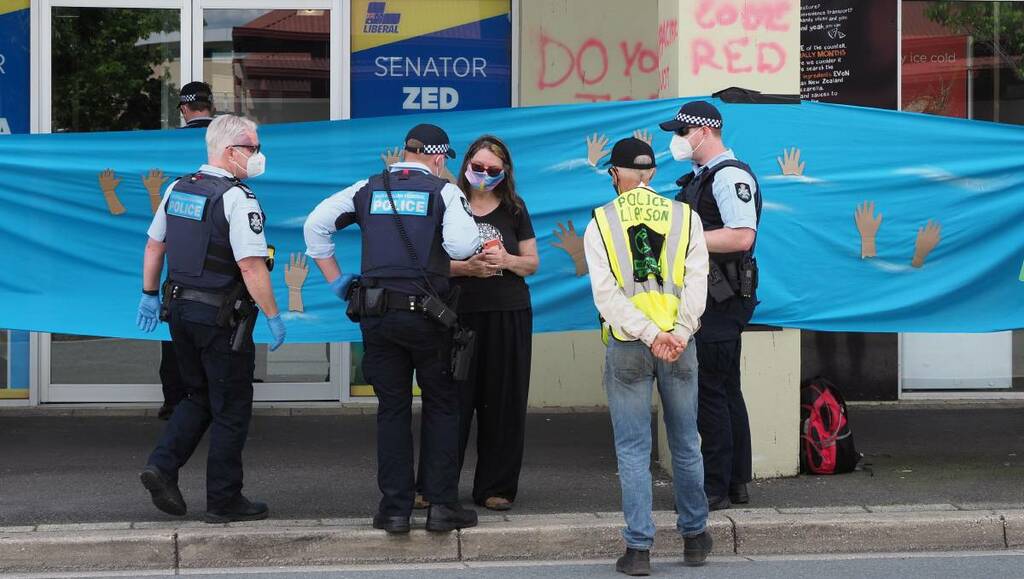 A climate change protester's bid for leniency for defacing a senator's office has been dismissed by a magistrate, who said consequences needed to have "real meaning" and not simply be an "idle threat".

The judicial officer's comments come after other protesters had charges dismissed and received $20 fines in other ACT incidents earlier this year.

Catherine Anne Adams, 60, was one of three Extinction Rebellion members whose cases were dealt with in the ACT Magistrates Court on Thursday.

She pleaded guilty to defacing a private premises after spraying chalk on the outside of ACT senator Zed Seselja's office on November 8.

She said the Liberal senator's office was targeted based on claims he failed to support Pacific Island countries facing the effects of climate change.

In court, Adams said it "was the best way to send a message to them [politicians]".

"He's the minister for the Pacific who's contributed little to climate change. He's still voting for climate destruction at every turn," she said.

Adams said it was was non-permanent chalk and could be washed away.

She asked for a non-conviction and said she had limited capacity to pay a fine.

Magistrate Glenn Theakston said, "I have difficulty with that submission", because there was a greater need for accountability and deterrence for those who know they would face court for charges arising from protests.

"This court's seen a number of protesters recently over the last maybe 12 months or so, including yourself," he said.

"We have some future-minded members of our community who feel passionately about topics ... they choose to deliberately engage in behaviour that is disruptive to send a message to try to persuade other people to adopt their beliefs.

"Then they get held accountable and brought before the court and ask for no convictions."

Mr Theakston said it was important courts send a message there would be consequences with "a real meaning" and not simply an "idle threat" to those who deliberately decide to engage "in behaviour that is an offence, even if it's for the purpose of a perceived social benefit".

He recorded a conviction and fined Adams $500, with six months to pay.

Adams' case comes after fellow Extinction Rebellion member Eric Serge Herbert, also listed to appear in the same court room on Thursday, was recently sentenced to 12 months' jail in NSW after he climbed a train in Newcastle to protest against the coal industry.

His ACT charges arose from alleged offending from previous protests, including him setting up camp on the lawns of Parliament House in October.

In a live social media video, he told a small crowd to find the courage to protect his generation from "the social collapse caused by climate breakdown".

His ACT charges were rescheduled before the court again next August.

A third Extinction Rebellion member, former CSIRO scientist Dr Nick Abel, also faced court on Thursday when the prosecution dropped charges after he allegedly damaged walls at The Lodge and Parliament House where a pram was also set on fire in August.