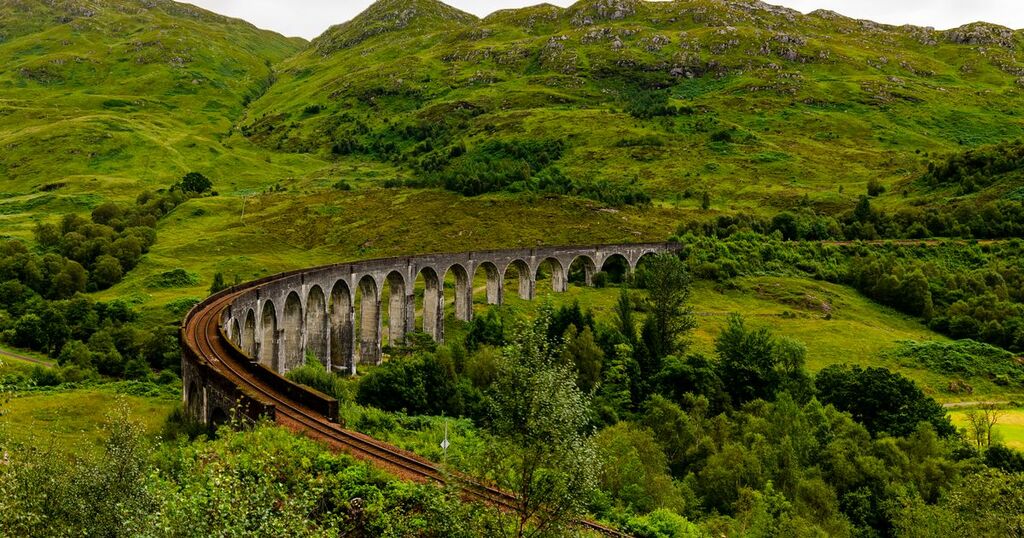 Any Harry Potter fans will recognise some of these stunning locations to have featured in the popular movies.

And Scotland is home to several filming places for the much-loved wizarding franchise, from Loch Etive to Glen Coe, the Express reports .

They include towering viaducts and deep gorges.

Who could forget when Harry, Ron and Hermione flew on the back of a dragon or attempted to escape Lord Voldermort's Death Eaters?

Here are seven of the best Scottish filming locations used in the Harry Potter film series to add to your itinerary on your next visit.

Starting things off where fans are transported from the Muggle universe to the Wizarding world, Glenfinnan Viaduct is most memorable for where the Hogwarts Express transports students for the start of term.

It appears in four of the eight films, the second of which, the Chamber of Secrets, sees Ron and Harry fly over the train in the enchanted Ford Anglia car.

There is also the chilling scene where the Express stops suddenly when the dreaded Dementors float around the carriages leaving an icy path.

If you want to see the famous Jacobite locomotive, travel over Glenfinnan Viaduct, you can take photos by walking to one of the viewing platforms at the Viaduct.

Or to be more precise, around 10.45 am during the summer season between May and October.

For those who really want to relive the experience of travelling to the school of witchcraft and wizardry, you can book a ride aboard the steam train itself.

Described as ‘the greatest railway journey in the world’, guests will embark on an 84-mile round trip around the Scottish rural landscape, passing by other Harry Potter film sites.

The route goes from Ben Nevis and has a pit stop through the village of Glenfinnan, before ending in the small port town of Mallaig.

Used for the first task of the Triwizard Tournament scene in Harry Potter and the Goblet of Fire, Black Rock Gorge is the 120-foot deep narrow canyon where Harry faces the Hungarian Horntail.

Located around 15 minutes north from Inverness, the gorge is said to be haunted by a local noblewoman where her cries can be heard.

Hikers will be left impressed at the red sandstone that cuts deep to give its enchanting appearance.

There are several paths nearby for a scenic walk around the Evanton Woods where the sharp rocks can be viewed crossing two bridges.

Appearing in the final film Harry Potter and the Deathly Hallows Part 2, this loch serves as the backdrop where Harry, Ron and Hermione jump into the misty waters off the back of the dragon.

The trio had just escaped Gringotts wizard bank after successfully taking one of the Horcruxes, the Cup of Helga Hufflepuff in their quest to defeat Lord Voldermort.

Spanning over 30 miles wide, Loch Etive is not just a hit with Harry Potter fans, but also those who admire the great outdoors.

The River Etive and other local rivers nearby are popular with kayakers and hikers.

Another nearby attraction that is also a hit with visitors is the 13th century Dunstaffnage Castle.

The northern side of Loch Etive is where Ron, Hermione and Harry set up camp during Harry Potter and the Deathly Hallows Part One.

Ron briefly leaves the group following a fight with Harry.

Scotland's roam laws allow those wanting to have a camping trip within the area to do so, a quirky alternative to sleeping at a holiday resort.

Again appearing for only another brief scene, but one that remains etched into many fans' memories is Eilean na Moine, otherwise known as Dumbledore's Grave.

During the final moments of Harry Potter and the Deathly Hallows Part One, filmgoers see Voldermort extract the Elder Wand from the Hogwarts Headmaster's hands.

The film concludes on a cliff-hanger as You Know Who victoriously stands on the island casting a thunderous spell.

You may also recognise the loch for where Hagrid heartbreakingly tells the gang that his Hippogriff Buckbeak is to be executed while skipping rocks.

A 40-minute drive from Fort William, you can also visit this sad Scottish setting if you catch a train ride along the West Highland Line to Mallaig, where you'll pass by Loch Eilt.

Glen Coe is such a beautiful area of Scotland, so even if you’re not visiting for a Harry Potter themed holiday, you’ll still fall in love with this Scottish beauty, it's even considered one of the most romantic spots in the country.

Glen Coe is used for many background scenes, most notably, where Hagrid's hut was set, creating memorable scenes when Harry, Ron and Hermione frequently visited.

The tiny home for the half giant was built in the field opposite a pub beside Torren Lochan in Clachaig Gull and the scene where Hermione punches Malfoy in the Prisoner of Azkaban.

If you think you are having deja vu or accidentally used a time turner, fear not, as Loch Arkaig is used for cleverly blended shots for some of the previous scenes just mentioned.

Director David Yates used shots from both Loch Arkaig and Loch Eilt to create his vision of how he wanted the lake to appear on screen when the trio jumped from the flying dragon.

Loch Arkaig was also used for some of the wider shots to create the lonely, dark, scenery for Dumbledore's burial site on the island.

While this filming location is rather off-grid, it promises to be a quiet, secluded location for any Harry Potter fan to reflect on their favourite moments from the films.

Located north of Fort William, the loch is surrounded by wildlife, islands and hills to walk around with the Loch Arkaig Pine Forest and a butterfly conservation reserve nearby.

Known as the fourth longest loch in Scotland, Loch Shiel stars as the Hogwarts Lake which is believed to have featured in aerial shots for all eight films.

Iconic scenes filmed here include most of the underwater second task of the Triwizard Tournament in Harry Potter and the Goblet of Fire.

This is when Harry and the other competitors must swim deep into the lake and recover what the mermaids have taken which is most dear to them.

One beloved moment that was written for the Harry Potter and the Prisoner of Azkaban is when Harry flies on the back of Buckbeak during his first Care of Magical Creatures lesson.

The Hippogriff expresses he is having a fun time by dipping a single talon into the water.

Those who are lucky enough to book a trip on The Jacobite will be able to see Loch Shiel from above as it passes over the viaduct.

While none of J.K. Rowlings mythical beasts live in the lake itself, locals will tell guests that Loch Shiel is said to be home to Morag the monster.

Be sure to have your camera ready like Colin Creevey and see if you can take a snap of the Scottish legend.

Otherwise, these seven locations across the highlands are sure to provide a wicked staycation that any Harry Potter fan will want to tick off their bucket list.