Any win, even the scrappiest or most fortunate, was enough for Tottenham here. To prove that point the roar after a tense four minutes of added time had concluded was similar to the noise that greeted the end of the north London derby on Thursday.

An impressive Burnley had pushed them all the way: this was an uncertain, increasingly leggy performance from Spurs but it puts them in the driving seat for fourth place, at least until Arsenal have completed an outwardly unappetising assignment at Newcastle on Monday night.

The tables have turned in a period of less than 72 hours and those who cavilled at the refereeing calls that helped Antonio Conte’s players to sail through the derby now have even more to chew on.

Tottenham would not have won without VAR, the intervention of which just before the interval rescued a display that had drifted after a sparky start.

The decision to award them a penalty after an incident that had passed almost undetected in real time enraged Burnley: in fact it was entirely correct by the letter of today’s mind-numbing laws but added to the sense that luck is on Spurs’ side just when they need it.

It was a measure of the way proceedings had panned out that, when a corner was played short to Son Heung-min rather than being slung into the box, groans were emitted from the stands. Son’s cross deflected into the air and was, at length, scrappily cleared. In the ensuing sequence of play Kane missed a hugely presentable chance after Lucas Moura’s centre; that appeared to be that for the first half but play was pulled back and a protracted analysis at Stockley Park immediately looked bleak for the visitors.

As Davinson Sánchez had tried to divert Son’s delivery back into the danger zone, he had played the ball on to Ashley Barnes’ outstretched arm. It was at point-blank range but a diligent interpretation of the rules would find no excuse for the limb’s extension; a penalty now felt inevitable and its award was confirmed after Kevin Friend checked his monitor. Kane got his bearings right this time and Burnley would receive no boost to their hopes of survival, save for a courageous overall showing that should breed encouragement when they face Aston Villa and Newcastle.

“I don’t think it is a penalty,” their caretaker manager, Mike Jackson, said. “How he can get out of the way of it, I don’t know. You can’t stand in an 18-yard box with your arms by your side, you don’t do that. I don’t know if the referee has played football before.”

Conte took the opposite view. “I think 200% a penalty, not 100%, it was so clear,” he said. “It was very difficult to understand the complaints.”

Both men were right in their way. Once detected, the offence had to be penalised; such pedantry does not cease to be discomfiting, though, and Friend’s initial oversight hardly felt a clear and obvious error.

Barnes would have enjoyed a moment of redemption had his sweetly struck drive not hit Hugo Lloris’s right post in the 62nd minute.

Shortly before the half-hour Lloris had denied Maxwel Cornet when clean through. It took Burnley, who lined up with a flat back five, time to emerge from their shell but they kept Spurs honest and home nerves frayed as they pumped set pieces into the box towards the end.

Tottenham had begun as if turbo-charged by the destruction of Arsenal, zipping the ball around and attacking in waves. Two Kane headers, the second hacked away from near the line by Nathan Collins, were the best of their early chances and they were labouring by the time the VAR official, Stuart Attwell, fired up the slow-motion replays. Son drew two excellent saves from Nick Pope in the second half but this instalment of a schedule that has irked Conte was rarely a free-flowing watch.

“Don’t forget we played [three] days ago in a tough game against Arsenal, and before that in Anfield against Liverpool,” he said. “In this kind of game you spend a lot of energy, not only in the physical aspect but in the mental aspect.”

On top of that Conte had not bargained for a sickness bug that meant Dejan Kulusevski could not start the game. It had also affected Lloris, Pierluigi Gollini and Harry Winks. There were shades of “lasagne‑gate”, when Arsenal pipped Tottenham to the Champions League in 2006 upon that pre-match revelation, but this time there was no bitter pill to swallow.

“We had to do our task, get three points and put some pressure on Arsenal,” said Conte, who will take the pain and tune in for the showdown at St James’ Park. “I want to watch, I want also to suffer.” Now is the time for strong stomachs. 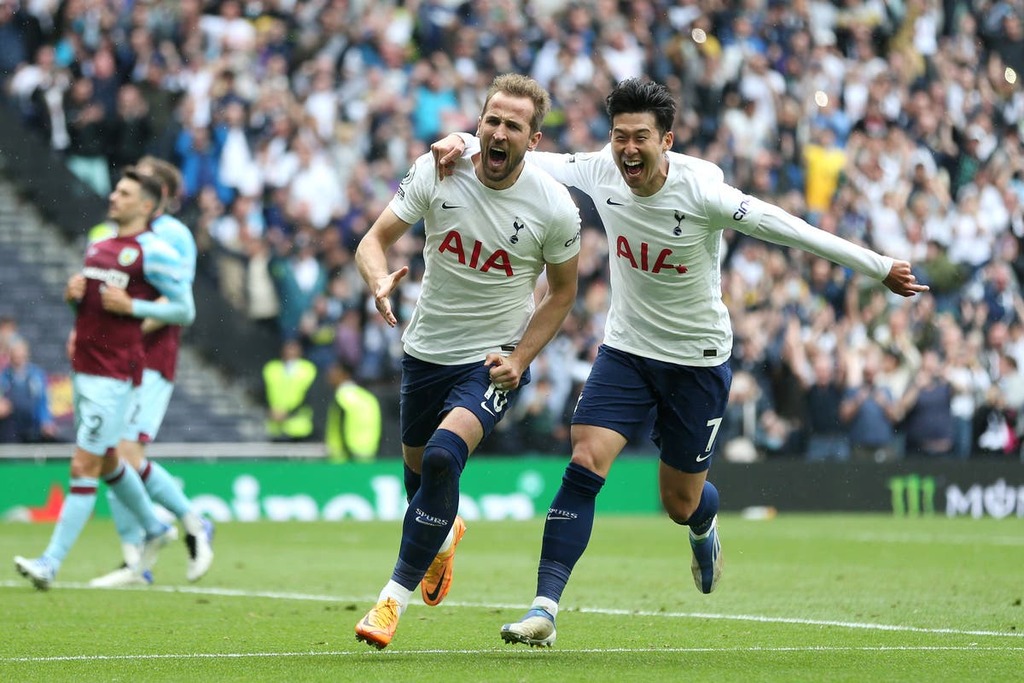 Tottenham edged Burnley for a tense 1-0 win on Sunday in the Premier League.