Harry and Meghan could 'overshadow' Jubilee and cause royal resentment, says expert

Prince Harry and Meghan Markle could overshadow the Queen's Platinum Jubilee celebrations and cause resentment among other royals, an expert has claimed.

Last month, it was confirmed that Harry and Meghan, along with their two children, would be travelling to the UK to take part in the festivities to mark the monarch's 70-year reign.

It will be the first time that their three-year-old son Archie has returned to the UK since his parents quit as senior working royals - and the visit will mark the first meeting of their daughter Lilibet with the Queen and other royals.

However, there will be no place for the family on the Buckingham Palace balcony after Trooping the Colour as Her Majesty has limited balcony appearances to working royals only.

And according to royal expert Camilla Tominey, palace aides will be doing all they can to ensure Harry and Meghan's presence doesn't detract from the celebrations.

She told the Telegraph : "You can include the Sussexes but you don't want there to be some sort of Harry and Meghan sideshow going on when the main event must be the Queen.

"Equally there will be other members of the Royal Family who are still doing the daily grind who will resent being overshadowed by Harry and Meghan even if they don't admit it.

"You're not going to want to have the likes of Princess Anne and the Earl and Countess of Wessex for instance who day in day out plant trees, unveil plaques and go to the opening of royal envelopes only to have the media completely focus on Harry and Meghan who aren't playing a role at all in the so-called family firm."

Meanwhile, at the weekend, Meghan congratulated Harry with a kiss after his team won a polo tournament.

She cheered on her husband at the Santa Barbara Polo & Racquet Club in California where he recently joined the Los Padres polo team.

On Sunday, they won the Lisle Nixon Memorial trophy, and it was down to Meghan to present the team with their trophy.

She kissed Harry's teammates on the cheek - and when it came to Harry, she planted a kiss on his lips. Some of her red lipstick rubbed off, and Meghan quickly wiped Harry's lips to take the stain off. 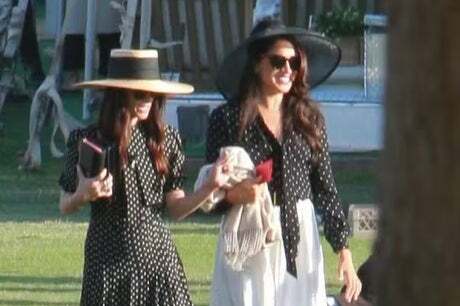 Evening Standard
One subscription that gives you access to news from hundreds of sites
Meghan's sweet gesture to Harry looks 'out of place' at macho-infused polo, says expert