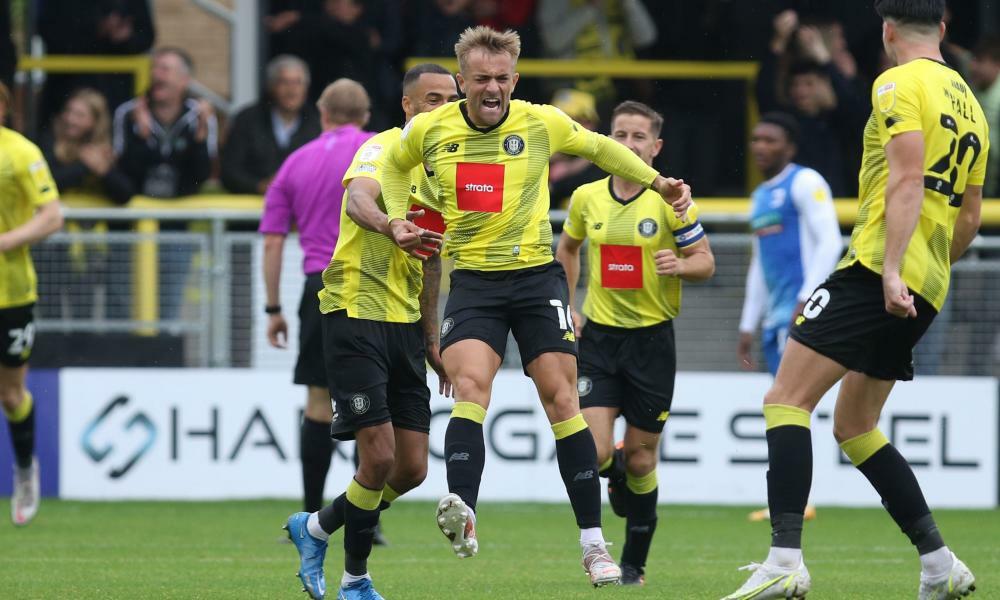 Yorkshire is home to managerial royalty, from Gareth Southgate to Marcelo Bielsa, but in the eyes of Harrogate supporters, Simon Weaver also belongs in that category, even if the England manager is usually the centre of attention.

“A newspaper said that I was happy to be the second-most famous manager in the town and I didn’t like that line because it looked like I was giving it the big one,” he says. “My wife went: ‘You didn’t say that, did you?’ I said: ‘There’s no way I’d ever say that.’

Harrogate’s growth under Weaver, now in his 13th season in charge, is striking. Gone are the days of him washing the kit or putting up trialists on his living-room floor at a time when the club had a handful of season-ticket holders. They have fostered a winning habit on their rise from National League North to the top of League Two and, having beaten Leyton Orient and Mansfield in recent weeks, they hope to preserve their unbeaten record when they host Newport on Friday.

Weaver invited Southgate, with whom he struck up a friendship after bumping into him at a local gym, to surprise his squad and share words of wisdom before their National League play-off semi-final win over Boreham Wood last year.

“We ushered him into the back room of this hotel,” Weaver says. “I said: ‘Just hide in there for 10’ and gave him a coffee.

“The lads were sat down and I opened the doors and said: ‘I want to introduce you to someone.’ He made the players feel so comfortable and even just hearing him say things like he hates teeing off on the first tee helped the players know that nerves are normal.”

Harrogate went on to win promotion to the Football League for the first time. “He just came in, stood in front of us and, in a strange way, calmed us down,” says the captain, Josh Falkingham.

In a meeting this pre-season, coaching staff highlighted the margins that make a big difference – 15 of Harrogate’s 21 league defeats last season were by a single goal – and they are determined to build on a blistering start.

Weaver, whose father, Irving, is the chairman, is working to realistic targets but has no desire to activate “survival mode”. Morecambe’s unlikely promotion last season acts as obvious inspiration, and Accrington, Burton and Cheltenham also reached League One despite modest resources.

“Clubs have given us reason to believe that if we can get consistent performances and get momentum going, then you’re allowed to dream,” Weaver says. “Yes, the club have said: ‘Retain your status, build on 17th spot but let’s try and strive for more.’ Let’s not put a ceiling on our ambitions and dreams.”

Harrogate have made impressive strides since turning full-time four years ago. This season they launched a Category 4 academy, which will work in tandem with their player development centre for boys and girls aged six to 16. Rachel Davis, the physio, still doubles up as the kit manager but they appointed a full-time analyst in March, freeing a few hours in Weaver’s week. Until then, he was clipping videos on Hudl and Wyscout. “Chatting to managers after games, they were saying: ‘It’s hard to be doing that as well,’” he says.

Falkingham, 31, is one of a core of players who have been on the ride from the sixth tier. George Thomson, Ryan Fallowfield, Lloyd Kerry – the longest-serving player – and Warren Burrell are four others. Burrell, who rejoined five years ago, has seen big changes since his first spell in 2009, when Weaver joined as player-manager after spotting an advert in the Non-League Paper while scanning for a report on his play-off winning goal for Ilkeston Town, which led to promotion from the seventh tier.

“Chalk and cheese,” says Burrell. “When the gaffer first came in, there were 200-250 fans at games – 300 tops. The facilities were poor – we used to train on overgrown playing fields in Wetherby – and to where we are now it has been a massive improvement across all departments. It has been some turnaround.”

Falkingham was released by Leeds at 19, when his boyhood club were in League One, without making an appearance, after playing in the youth team alongside Fabian Delph and Danny Rose. “There is a burning desire throughout the core the manager brought in four years ago,” he says. “We have all had setbacks or been told we’re not good enough at some point in our careers. We don’t take anything for granted; I think that’s the beauty of us. It would be an amazing feeling to see my career go full circle.”

Weaver has a good relationship with Southgate – “I text him before every [England] game, and he always texts back almost immediately [including] with a football emoji or a thumbs up” – but there is another brain around to pick in the area.

“Bielsa is in Costa sometimes in Wetherby,” says Weaver. “I’ll be picking up a coffee and he will be sat there writing notes. People go up asking him to sign things but I’ve not wanted to disturb because I can see he is so focused on what he’s doing. Maybe one day I can say hello and ask for a bit of advice.”