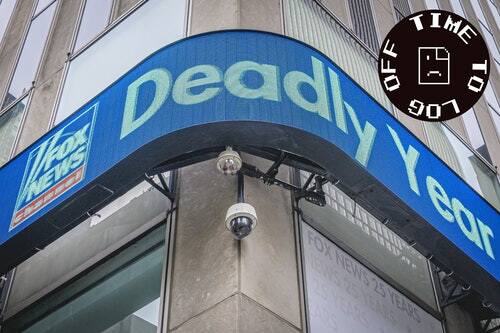 Time to Log Off is a weekly series documenting the many ways our political figures show their whole asses online.

At a certain point, telling certain politicians and pundits — namely, the worst of the worst who regularly show their whole entire ass in the service of ego and bigotry — to log off becomes a purely academic exercise. Should Marjorie Taylor Greene, and Ted Cruz, and Andrew Yang, and Mike Lindell all sign out of their various social media accounts, close their laptops, power down their iPads and iPhones, and simply disappear forever? Of course. But then again, so should most of the rest of us, too, if for no other reason than simple self care. And yet!

Having now acknowledged both the limitations and hypocrisy of imploring people to log off, while knowing full well they (and I) never will, I think it’s time to broaden my scope a bit. Why should I let the oppression of scale dictate who should log off, one at a time, when there’s an entire enterprise — a rotting, fetid, necrotic institution — worthy of being told to pack it up and GTFO? And when better to do do just that than on its birthday?

So, here we go. Twenty-five years to the day since Rupert Murdoch foisted his boomer-centric disinformation factory on the only somewhat suspecting masses , I say to you, Fox News, as a entity unto yourself: It’s time to log off.

This isn’t to deny the right-wing network’s significant “contributions” (????) to both the American media landscape, and civil society as a whole. On the contrary, there’s no question that Fox News has established itself as one of the most influential mouthpieces for right-wing racists, grifters, and conspiracists since Father Coughlin first took the mic at WJR nearly a hundred years ago. Indeed, it’s hard to imagine our past quarter-century of division, environmental collapse, bigotry, and general distrust without Fox News gleefully adding fuel to whatever fires captured the most eyes. (Not that they’re alone in this regard — far from it — but they’re certainly the most shamelessly evil in this particular arena.)

But at a certain point, it’s hard to look at Fox News’s admirable track record of social dysfunction and gleeful exploitation without wondering — especially now in the post-Donald Trump era — whether its best times are behind them. Not in terms of money, or ratings, or sheer cultural influence, of course; Fox still reigns acutely supreme in regards to all three. It rakes in billions while flexing an astonishing ability to convince viewers to accept its broadcasts as vox dei without a moment’s hesitation. But after essentially manufacturing, boosting, and — crucially — steering an actual, honest-to-god president of the United States, it’s hard to see where you go from there.

What’s more, as an established institution now, Fox News’s stability at 25 years of age masks the fact that it’s no longer the most hyperbolic, hysterical, unashamedly bogus news site on the block. The right-wing cultural wave Fox News largely started two-and-a-half decades ago has now since crested over and beyond its progenitor, spawning hungrier, even more psychotic offspring like OANN and Newsmax. They may not have Fox News’s clout, but they’ve sure got the network’s philosophical number — and are more than happy to see what happens if they push it even further.

So I say let’s let everyone save a little face, yeah? The Tucker Carlsons and Brit Humes and Sean Hannitys of the world have more than enough money and power on their own, while anyone truly hankering for unfiltered racism and lunatic conspiracies still has an internet’s worth of self-affirming grifters to choose from — an environmental factor crucially missing from the media landscape when Fox News first launched. So why not quit while you’re ahead, buds? You’ve already left a nasty scar across the world of broadcast journalism and, y’know, the world as a whole. Why not pack up your bazillions of bucks and call it a day? Treat yourself to a well earned break. Yeah? Please? Log off?

And don’t you think Brit Hume knows he sounds like a goofus for still carrying water for former President Donald Trump? Why, bro? Why?

I mean, jeez, a quick glance at the Fox News homepage today is a neural bombardment of stories about Beto O’Rourke feuding with Matthew McConaughey and a meaningless argument between a former governor and a CNN commentator. Sure, maybe people are clicking on that stuff, but there’s no way it’s actually fulfilling, right?

So do it. You know you want to. Log off. It’ll be nice. I promise. Look, I know it’s your birthday, but I’ll be the one doing the wishing here, okay?