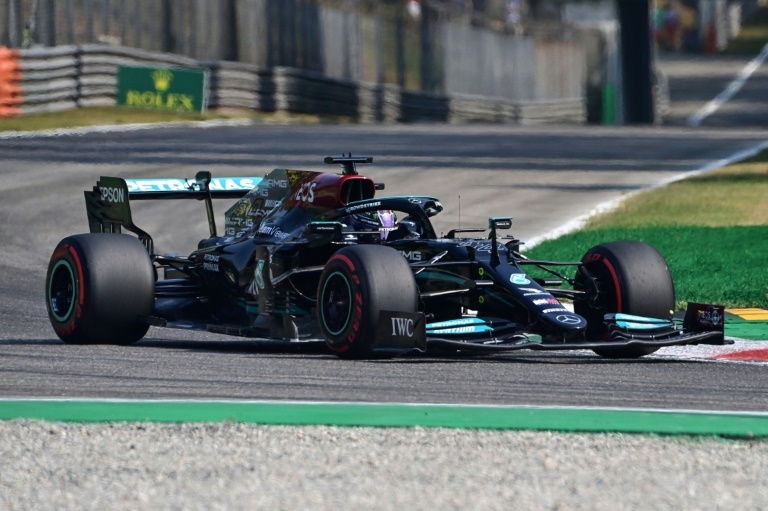 Monza (Italy) (AFP) - Lewis Hamilton topped the times in Saturday's final practice session for the Formula One Italian Grand Prix which was shortened after home hope Carlos Sainz crashed out.

Seven-time F1 champion Hamilton posted a best time of one minute, 23.246 seconds at Monza, 0.222sec ahead of teammate Valtteri Bottas in a one-two for Mercedes as the Briton prepares for another attempt to bring up a century of Grand Prix victories.

Championship leader Max Verstappen, who is three points ahead of Hamilton in the drivers' standings, finished 0.416sec back in third, the same position from which he will start the Sprint race later on Saturday.

Hamilton has been stuck on 99 wins since taking the British GP at Silverstone in mid-July, when the Sprint format was used for the first time.

With only two practice sessions available instead of the usual three due to the Sprint format, drivers were off the track for around a quarter of an hour after Ferrari's Sainz hit a wall at the Ascari chicane and span into the middle of the track.

The Scuderia will now have to work to get Sainz's car ready in time for the afternoon's Sprint, in which Sainz has been provisionally cleared to start seventh on the grid, alongside teammate Charles Leclerc in row four.

Leclerc finished practice 1.524sec off the pace in 11th in what was a poor session for Ferrari on home turf at Monza.

Later on Saturday Bottas will start from pole in the 100km Sprint race, which will decide the grid for Sunday and give championship points to the top three.

First place in the Sprint will take three points, second place two and third place one.

However Bottas will start Sunday's race from the back of the grid after being penalised on Friday for taking on power unit components during qualifying for the Sprint.