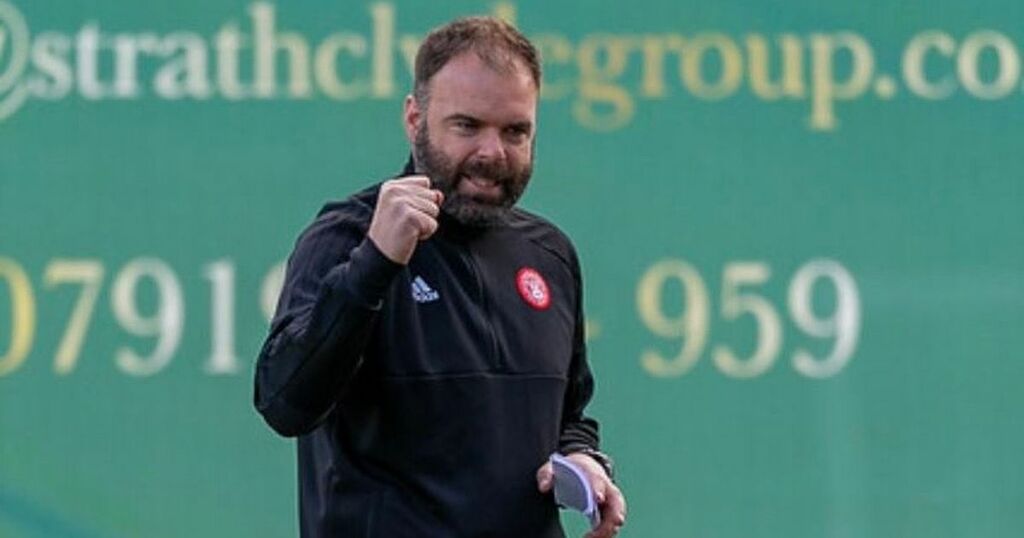 Gary Doctor hailed Hamilton’s Hannah Scott for keeping her cool to break Hearts in Sunday’s SWPL1 opener after her last-gasp penalty was saved.

In a bizarre game, Accies were awarded three penalties and missed two of them, but went on to win 2-1.

Josephine Giard missed a first half spot-kick before Scott pulled Accies level from the penalty spot.

A third penalty was awarded in the 91st minute and although Scott saw her effort saved, she mopped up the rebound to spark wild celebrations.

And boss Doctor said: “It was a strange moment to get three penalties in one game and when you’ve already missed one, you find another penalty taker.

“Funnily enough, I didn’t have enough time to panic when Hannah missed it because I saw the bill spill to her right away and in that split-second I knew we’d get the rebound.

“I think she showed good composure not to freeze after it was saved and making sure she got to the ball first.

“It was a great way to win it in injury time and, coming from behind, it really brings the players together as well.

“To get off to a winning start takes a wee bit of the pressure off us as well.

”I think when you know it’s a game that both teams target as winnable, it’s huge to come away with it.

“I thought the players put so much into it, they were well worth it.”

Accies now face a daunting visit of Rangers, who kick-off their campaign when they visit New Douglas Park this Sunday.

Having lost 6-0 to title favourites Glasgow City in the SWPL Cup last week, Doctor knows it will be a tall order against one of the sides expected to challenge for the title, but he hopes lessons have been learned from that humbling that can help them cause an upset.

He added: “It will be a really tough game against Rangers, but having got those three points it takes a wee bit of pressure off.

“There won’t be too many times this season we are ahead of Rangers in the table.

“But it means we can maybe look at the game a bit differently because we aren’t on a downer of losing our first game.

“There’s hopefully a spring in the players’ step. These are game that are bonus point games for us, so hopefully we can go and cause a shock.

“There will be a lot of similarities to this game and the Glasgow City game, so there will be plenty for us to learn from the City game.

“We were disappointed to lose by that scoreline. We let ourselves down in that game, but we certainly made up for it on Sunday.

“Hopefully in the Rangers game there’s lessons learned for that in terms of what we got out of it as coaches as well.

“We want to give them something to think about and not just allow them to be on top all the time.”