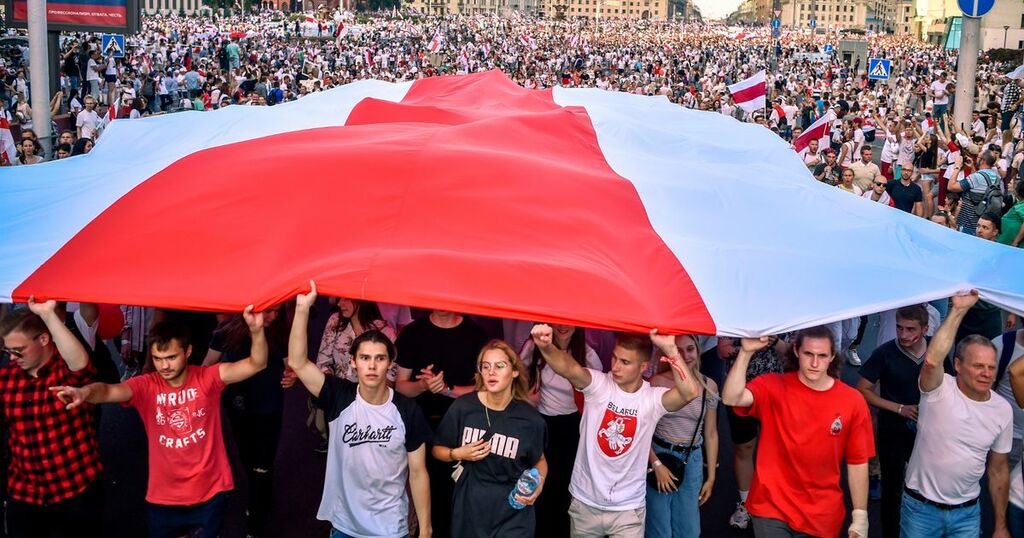 A football team who have been adopted by the opponents of a despotic regime because of their kit colour are now campaigning to help political prisoners.

Hamilton Accies is to host a protest match to highlight the plight of those in the landlocked eastern European country of Belarus later this month.

That includes footballer Aliaksandr Ivulin, 29, who played for Krumkachy FC in the capital of Minsk.

The midfielder, who is also a popular YouTuber and journalist, had been accused of hanging a red and white flag from his window.

The banner, a white flag with a red horizontal stripe similar to Accies' home kit, has been adopted by Lukashenko's opponents.

Aliaksandr was originally caged for 30 days on the trumped-up charges but is now facing further allegations and remains behind bars three months later.

Friend Yaroslav Pisarenka, 26, was also arrested over the banner row but was released after 15 days.

He's since fled the country and has taken over Aliaksandr's popular Belarusian football YouTube channel.

Speaking from a secret location via a translator, he said: "The red and white colours are very important to us. It's great we are having a match at Accies' stadium when the club has those colours.

"When we got arrested, we were blamed for waving a flag and supporting a ­political opponent of Lukashenko.

"We never even flew the flag and believe the police planted it. It shows you how scared they are by a flag. It's become a symbol of our movement.

"When Lukashenko took over, he got rid of it and brought in a new one similar to our flag when we were a Soviet state, which is red and green.

"People are waving the red and white flags from their homes to show solidarity with those protesting on the streets. You can be arrested, badly beaten up or worse for wearing red and white colours."

Football in Belarus has become a focal point of the protest movement, sparked when Lukashenko won a sixth term last year. Critics accuse him of cronyism, electoral fraud and torture of political opponents.

Last year the international community reacted with fury when a Ryanair flight was diverted to Minsk because it was carrying a journalist who had criticised Lukashenko.

And the country's top football division was suspended when fans began calling on him to go from the terraces.

Yaroslav said: "We hope the match will raise awareness and support for the plight of people like Aliaksandr."

The People's Consulate of Belarus in Scotland's Irina McLean said: "We want to raise awareness about the regime's illegitimate actions where innocent people are being held behind bars for expressing political views."

The tournament will be held at New Douglas Park on September 26.

Hamilton Accies said: "We have no opinions on world affairs but the organisers seem truly worried about the plight of their countrymen back in Belarus."