A car-ramming wounded 12 Israeli troops and two others early Thursday in an attack that Palestinian Islamist group Hamas hailed as a response to Washington's controversial Middle East peace plan.

A manhunt was underway for the driver who fled the scene outside a popular Jerusalem entertainment spot.

The attack occurred shortly before 2am (12am GMT) outside the First Station, an historic Ottoman-era railway terminus that has been turned into a cultural and entertainment centre with bars and restaurants.

The attacker struck in the street outside where the soldiers had been marching, the army said.

One of the soldiers was "severely injured" and has been evacuated to hospital.

Public radio said they were new recruits on their way to an induction ceremony at Jerusalem's Western Wall, the holiest site where Jews can pray.

"During the incident, a terrorist sped his car towards (Israeli) soldiers," the army said.

Israeli troops "are currently pursuing the terrorist who escaped the scene".

Israeli Police spokesman Micky Rosenfeld said "the incident is being investigated as a terror attack".

There have been car-rammings targeting Israeli troops in the past, in the occupied West Bank as well as Jerusalem.

Later on Thursday, a gunman shot at a border policeman at the entrance to Jerusalem's walled Old City, lightly wounding him, Israeli police said. Police opened fire on the assailant and killed him.

In a statement, Hamas spokesman Hazem Qassem said the attack was part of "resistance" operations, but stopped short of claiming responsibility.

It came amid heightened tensions between Israelis and Palestinians, since the release last month of US President Donald Trump's long-awaited peace proposals.

The Palestinians have angrily rejected the plan, which unilaterally gives Israel most of what it has sought in previous negotiations.

There have been sporadic clashes between Palestinian protesters and Israeli troops since the release of Trump's proposals.

In the northern West Bank town of Jenin, Israeli forces shot dead 19-year-old Yazan Abu Tabikh on Thursday, in an incident that left seven others wounded.

The army said troops had "identified a number of armed terrorists who hurled explosive devices and fired towards them. The forces responded with riot dispersal means."

On Wednesday, a 17-year-old was shot dead by Israeli forces during a protest in the flashpoint West Bank city of Hebron.

Israeli military described the teenager as a "violent rioter" armed with a Molotov cocktail who posed a threat to troops.

Since Trump's plan was announced, there has been almost daily fire from Gaza into southern Israel, drawing Israeli retaliation.

There have been no reported casualties. 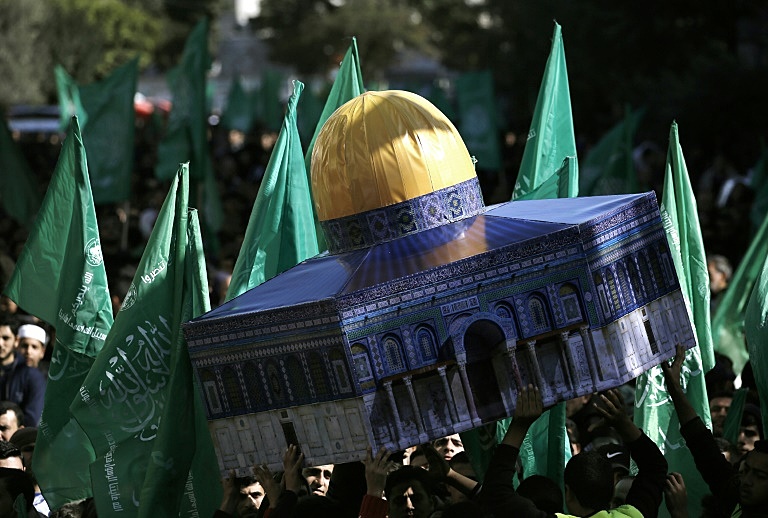 A Palestinian motorist slammed his car into a group of soldiers in central Jerusalem early on Thursday, wounding 14 before…

A dozen Israeli soldiers were injured in a suspected car-ramming attack in Jerusalem today.